When the Australia government introduced a cash grant for first home buyers, the aggregate effect was to increase home prices by roughly the amount of the grant, quickly negating its effect on affordability.


This observation has led many people to mistakenly believe that giving cash grants in any form will pass through one-to-one into higher home prices (or rents). In discussions of all types of welfare—from UBI, to traditional welfare payments—this error comes up.

The error comes about because people fail to see that when given a choice, people spread their extra buying power across all the different types of goods they consume. An income subsidy is not the same as a subsidy for a particular type of expenditure.

Economists have been studying the way spending patterns vary with income for over 150 years. Ernst Engel noticed in 1857 that as incomes rise, households spend a lower proportion of their income on necessities like food. This observation became known as Engel’s Law, and the income-spending relationships for different goods became known as Engel Curves.

Housing, like food, is a necessity. As such, the share of income spent on housing usually falls as incomes grow. The Australian data shows that even for private renters—where one would expect competition from higher-income renters to bid up housing rents—the share of income spent on rent falls from nearly 50% of gross income for the lowest income quintile households to just 13% for the highest-income households. 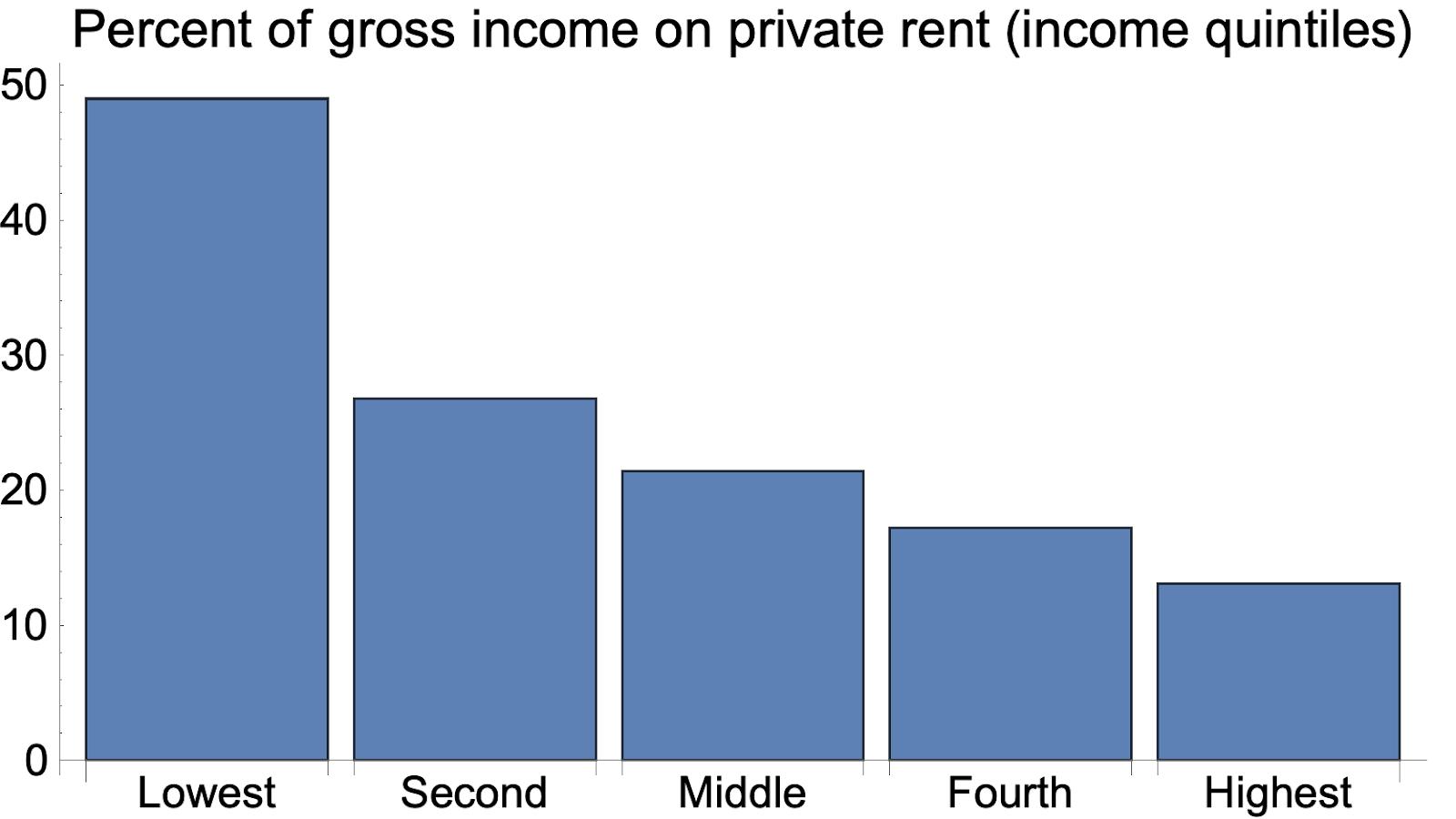 The story is rather different, however, if welfare payments are tied to a particular type of spending. This even more important in the case of housing, where the total stock changes extremely slowly and where landowners have monopolistic incentives to prefer price gains over investing in additional supply.

An example is if everyone received a fixed $1000 per month that could only be spent on housing. Because this money cannot be spread across the consumption basket, people would soon learn that they are best off using it to bid up the rent to access their preferred housing location. The macroeconomic reality is that this additional buying power will chase roughly the same number of dwellings, increasing their price.

The difference between a “general income subsidy” and a “housing expenditure subsidy” can be shown using Engel curves. The chart below shows three Engel curves for a household, with the orange representing housing. Blue represents other normal goods, where expenditure rises with income, but a bit faster than for necessities (as per Engel’s Law). The green curve is an inferior good. Household spend less on these goods after their income reaches a certain level. 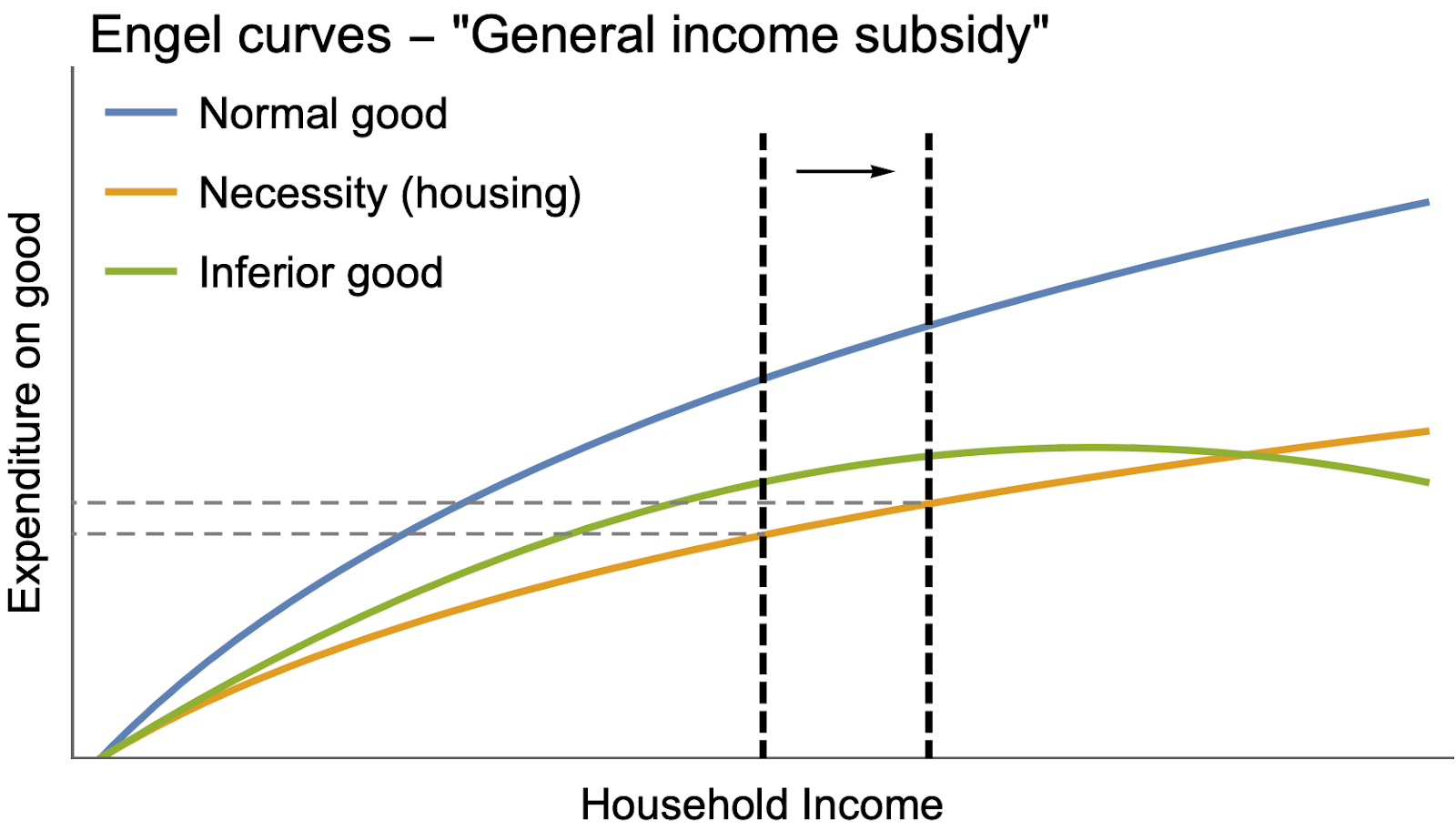 A “general income subsidy” shifts the household up to a higher income level, and they spend more on all the types of goods in their consumption basket. The effect on housing expenditure is relatively small, as expected by our previous 5-7% assessment of marginal housing expenditure.

The next chart shows the effect of a “housing expenditure subsidy”. The total income of the household is unchanged. They are only able to direct the subsidy towards their housing expenditure. Here, the effect will be to boost buyer competition for scarce housing locations and increase home rents (or prices). This was the case with the first home buyers grant. 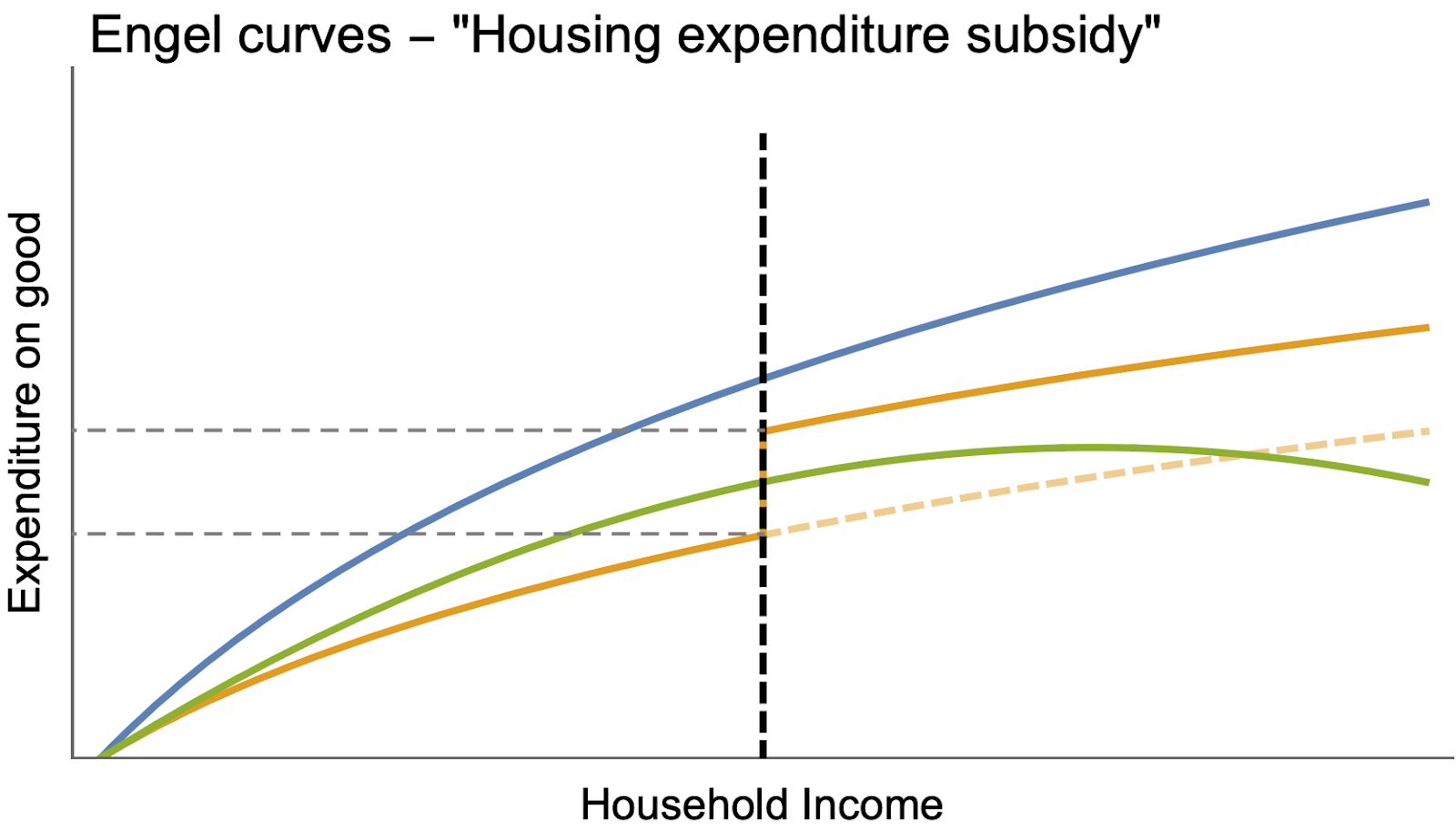 Though it is tempting to see them as quite similar, subsidising household incomes and subsidising a particular type of expenditure have rather different economic effects.
Email ThisBlogThis!Share to TwitterShare to FacebookShare to Pinterest