Using economics to justify our fears: The case of ageing and holidays

One of the great myths in economics is that there are substantial negative impacts from population ageing. But there is no economic basis for this fear. In fact, it is a good example of how economic reasoning is often used to provide a back-story for our instinct and emotion, rather than as a basis upon which to form a considered view.

For example, in the economic story we tell to justify our fear of ageing we use outdated assumptions about work patterns (over 15 years old is in the workforce, over 65 is not) and often ignore the counterbalancing effect of fewer young children needing care and schooling.

But when it comes to other discussions about policy, such as more public holidays, a shorter working week, or robots taking jobs, we pick a different economic story to make sense of our insecurities about losing our job.

In reality, the economics behind these two views are contradictory, as I will now show.

When it comes to ageing the economic story involves the calamity that might arise if the ratio of working to non-working people in the economy falls (the age dependency ratio). But imagine shifting your focus from this ratio to another ratio, which is the number of working to non-working days in the economy each year (the workday dependency ratio). Both are equivalent ways to conceptually carve up the total work done in the economy—either by people or by time— since Yearly Output = Working People (WP) x Working Days (WD).

In the absence of changing work norms, ageing may reduce output by reducing the first term in this equation as a share of total people. But so too will any policy change that reduces someone's working years of life, such as introducing additional years of schooling.

The number of working days (or even hours) per year is a function of many things, like norms about overtime, limits on weekly hours, weekends, statutory holidays, and more. Changes in these variables can also reduce output if they reduce yearly work time.

According to the Australian Bureau of Statistics, expected ageing in Australia over the next 15 years is likely to increase the age dependency ratio by 18%. This is the ratio that justifies fears about population ageing.

But where is the fear about shorter working years? We can, for example, look at what would happen if Australia had the same number of annual vacation days at the UK of 37 compared the current 28. Some sources say that leading the charge of fewer work days are countries such as Austria with 38 vacation days, and out in the lead are Brazil and Sweden with 41 days! 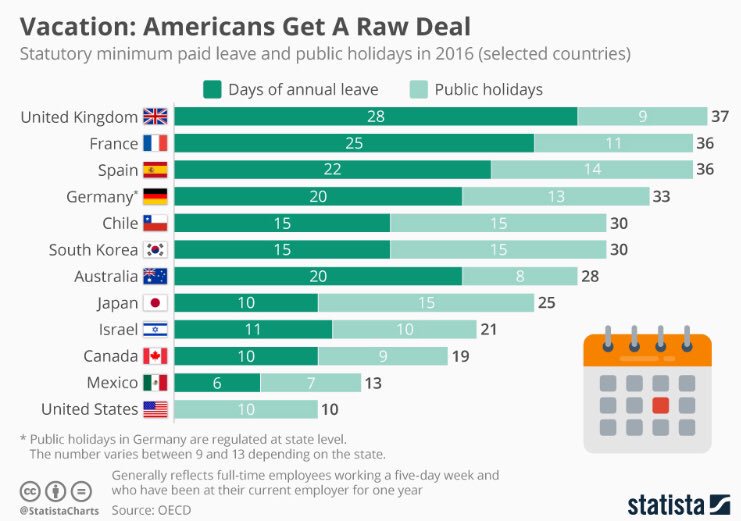