A famous 1999 article in the The Journal of Real Estate Finance and Economics was entitled Why don't we know more about housing supply? It starts by observing that in the 1960s and 1970s most scholars had found that the supply of new housing was perfectly elastic. In plain English, this means that new housing construction seemed to mysteriously occur whenever it was required, regardless of the price.

So if the standard economic logic that high prices incentivise more new construction fails, how is one to solve this economic mystery?

The solution is surprisingly simple and was identified as early as 1970. The decision to build a new house on a piece of land is not a production output decision but an irreversible capital allocation decision (i.e. you can’t easily ‘unbuild’ the house next year if it is the wrong decision to build it today).

If you try and understand housing supply in terms of the standard single-period static supply and demand model you will struggle to make sense of housing. In this static model world, every opportunity for housing construction is already taken up, since it compresses all future time into a single period. If it could be profitable to build a house in ten years time, then the model says it is already built!

Once you break free of this static view and add time to your thinking, housing supply makes a lot more sense. Landowners can choose not only how densely to develop housing on their land, but also when to develop. After all, if the price of the land is rising quickly, why would I develop today when I could make more money by holding the land vacant and developing more housing later?

When you start thinking dynamically the price cycle and the supply of housing become tightly linked. I want to demonstrate briefly how dynamic balance sheet allocation decisions make sense of housing supply mystery with a simple example.

To set up this example, we need to understand firstly that the economically optimal behaviour in capital allocation decisions is to maximise the rate of growth in the value of the total balance sheet. For the moment I ignore risk and uncertainty to make a simple point that is much more subtle in reality.

Consider a balance sheet as per the Table below. In the beginning, the portfolio is $100 of cash, vacant land (2x lots worth $50 each), and housing (say one house on a lot worth $50 with a building worth $50).

Now consider that over time the total returns to each part of the balance sheet are as follows:


If no capital reallocation decisions are made, then in the next period the balance sheet is as shown in the Base column. The extra $5 cash comes from the 2% interest on the cash balance plus the 3% rental return from the house. Both the vacant land and housing are marked up to the new market prices.


It is only economical for a landowner to increase housing supply on their vacant land by swapping cash for a house if it increases the total rate of growth of their balance sheet. You can alternatively think about the 'cash for new construction' swap as borrowing for new construction.

Let us now see what happens to the balance sheet growth if a new house is built on one of the vacant lots using $50 cash. The result is in the More housing column.

From the $150 cash, $50 was used to build a new house on one of the two $50 plots of land, and the now $200 worth of housing increased in value to $204. The two houses also returned $6 in rent, which in addition to the $2 interest on the remaining cash balance, took the total cash balance to $108. The remaining vacant land lot increased in value by 4%, from $50 to $52. In total this portfolio reallocation decision increased the rate of growth of the balance sheet to 4%, compared to 3.43% if no reallocation was made. Thus, it was economical to make this reallocation and build a new house.

Importantly, this decision did not depend on the price of housing at all. We have no price level parameter at play here—only the yield and capital growth rate. Thus, the first important insight from this dynamic view is that decisions to invest in new housing do not depend on the price level. This contrasts with conventional static economic models that suggest that the supply curve for new goods is upward sloping with respect to price.

Now consider that instead of reallocating cash to housing structures, it was reallocated to holding more vacant land.

In the More land column I show the balance sheet effect of buying another vacant lot. Here the now three vacant lots grow from $150 to $156 in value over the period. The cash balance is reduced to $100 but increases with $2 of interest and $3 of rental returns to $105. The housing grows in value to $102 for a total balance sheet of $363, or 3.71% total return.

Adding more land to the balance sheet was also desirable in this situation. Under these conditions there is an incentive to both increase the stock of vacant land owned, and the stock of housing built.

This is exactly what we see happening with land developers in Australia. When they develop more lots they also increase the stock of vacant land held in their ‘land bank’. The chart below shows this relationship for the top eight residential developers (for both houses and apartments). When the rate of new construction increases they also source more vacant land to expand the stock kept on their books. 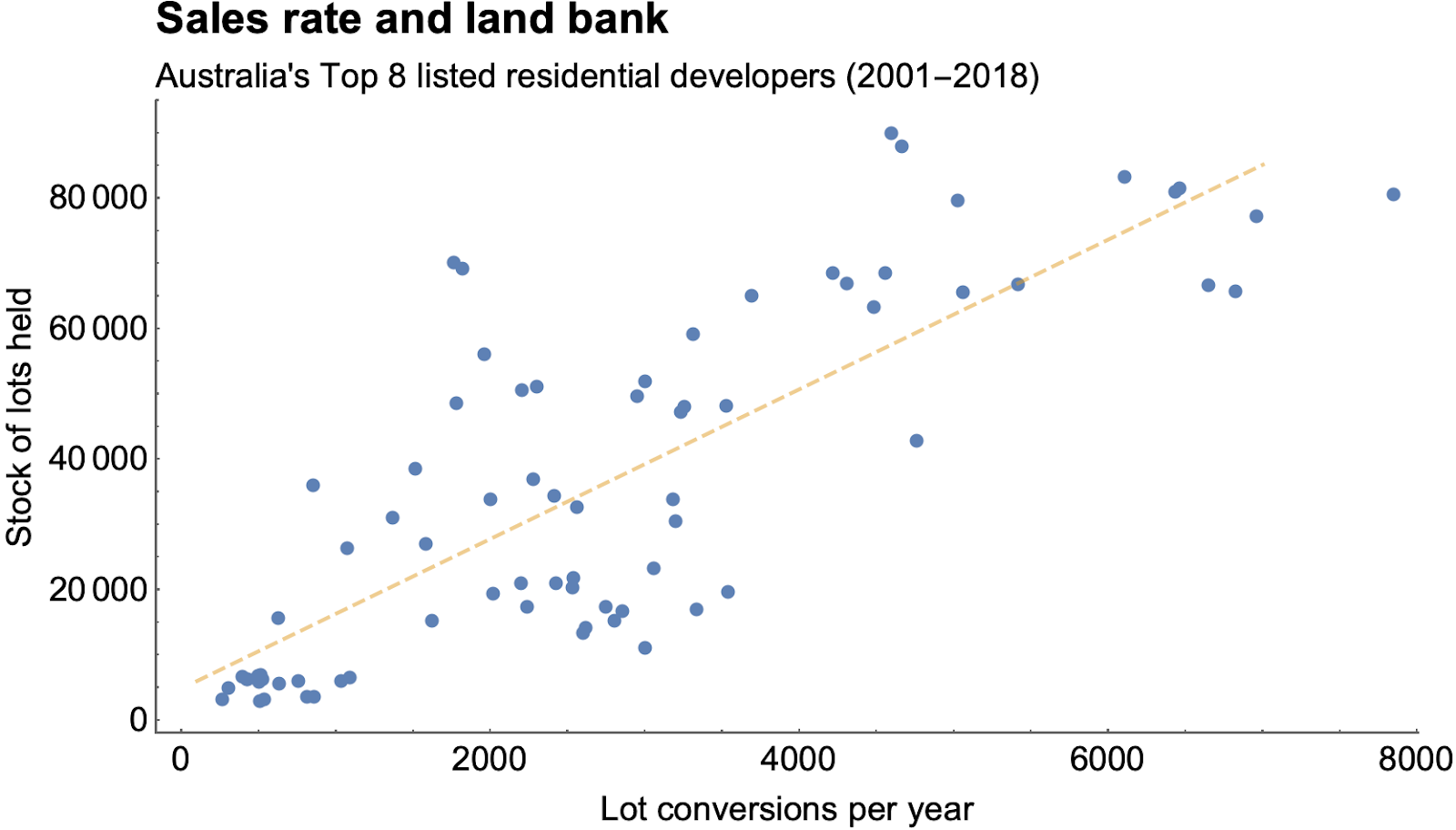 I demonstrate the effect of responding to both incentives in the final More land and housing column. Here, two vacant land lots are bought with cash and one is used to build a new house, expanding both the stock of vacant land and housing on the total balance sheet. Here, the three vacant lots increase in value by 4%, taking the value from $150 to $156. The two houses increase in value from $200 to $204 and deliver $6 in cash from rents. The total balance sheet at the end of the period is $366, or a 4.57% return. During a price boom, it is optimal to increase both new dwelling construction and the stock of developable vacant land.

When the tide turns land and housing materialise

Consider the again the same starting balance sheet, but this time the capital growth is negative, just like after a peak of housing price boom. Interest on cash falls a little to 1.5%, land price growth turns more negative than the price of housing, but yields are roughly constant.


In the table below, we can see the balance sheet effect of reallocation decisions under these new conditions. In this case, since owning vacant land offers a pure negative return with no imminent positive cash flow, it is a bad play to have too much on the balance sheet, and either converting it to housing or cash is the way to go.


This scenario is very similar to what is happening now in Australia. Developers are trying to transform their vacant land assets into new housing using a build-to-rent model while at the same time reducing their land banks. All of a sudden there seems to be a flood of land and housing available!

Similar logic applies to owners of under-utilised housing who might be holding a dwelling vacant, or using it only occasionally, because keeping their options open is being paid for by capital gains. When their balance sheet starts shrinking their best option is to start renting the home to improve their overall portfolio return, further flooding the market.

Why prices and supply must track together

The dynamic balance sheet approach shows why these purchases cannot happen without bidding up prices. The simple reason is that current owners of housing also have an incentive not to sell and to themselves expand their balance sheet exposure to housing. An equilibrium in which prices are stable and the stock expands to accommodate demand defies balance sheet logic.

The feedback cycle of high house price growth attracting further home buyers can continue until all willing participants have maximised their available exposure to housing. Then, as buying stops, growth rates fall, and logic dictates that reducing balance sheet exposure to housing is necessary, fuelling the bust.

This is why credit plays such a crucial role in the cycle. It facilitates large negative cash balances (loans) being converted to housing, greatly expanding the total capacity of the agents in the economy to shift their asset balance towards housing.

One way to align the cycle more closely to expanding supply rather than prices is to differentiate credit availability, making it more accessible for new housing and less accessible for existing housing. The increase in Chinese buying in the 2012-2017 cycle that was biased towards new housing did help expand supply higher than otherwise in the cycle, but in the process further fuelled price growth.

How does zoning fit in?

Rezoning vacant land to allow higher densities fits into this view as a way to increase the rate of growth in the value of vacant land held. In short, it makes keeping land vacant relatively more attractive than converting it to new housing. It is easy to understand the logic here if we think about the reverse scenario of down-zoning land to decrease its development density. The threat of future down-zoning would encourage faster conversion of vacant land to housing. The possibility of future up-zoning, therefore, encourages the holding of vacant land and a slower rate of conversion to housing.

Developers aren't secretive about this behaviour. In 2013  Stockland told its investors that it was delaying some projects to “improve return prior to launch.” Without the option for up-zoning to improve returns, these projects would have been built and sold sooner than otherwise.

I have spent more than ten years trying to unravel the mystery of why the observed patterns of housing supply conflict with standard economic reasoning. I now think I have solved it, but it is a radical departure from the standard thinking that most economists, housing analysts, and policy-makers are trained in.

Instead of housing supply responding to prices, it responds to the rate of return of different asset classes. In this world, the notion of a static equilibrium seems to make little sense if the rebalancing of portfolios into new housing feeds back into prices. Both prices and the rate of new supply move together until the system runs out of new buyers. What seemed in the boom to be a shortage of land and housing suddenly becomes a flood as expectations of high returns vanish. Just ask anyone in Ireland or Spain about this.

The only remaining mystery is why this dynamic approach, which has part of the intellectual debate in economics journals for nearly half a century, is not a central part of mainstream economic discourse.
Email ThisBlogThis!Share to TwitterShare to FacebookShare to Pinterest