I was an illogical ideologue

I recall many heated political and economic discussions with Paul Frijters when I started my PhD. In retrospect, these would simply involve me rambling and him pulling me up questioning the logic of the next line of my argument. I realise now that “younger me” was happy to regurgitate arguments I liked no matter the logical coherence.

But now life is much harder. Being absolutely critical and logical means you don’t believe the same myths as your social groups. It makes you an outsider in the purest sense.

It is also career-destroying. Telling people comforting lies is how you make the big bucks, particularly as an economics consultant.

You can tax capital gains due to inflation

I’ve never understood the concern adjusting for inflation in the taxing of capital gains. The gain, inflation-adjusted or not, is simply a profit in the year it is realised. Businesses investing in new capital equipment don’t get to say “Yeah, but if I bought this machine today it would cost heaps more, so let me just deduct today’s price as an expense."

Brexit will not be an economic disaster

If supply chains are so tightly integrated that the British economy will collapse, then it is in the political interests of countries at the other end of these supply chains to agree to reasonable trade conditions so that their countries don't also suffer. Indeed, most of the arguments for Remain are not economic ones. They look and sound like economics, but there is no economic reasoning.

Take this article, which suggests that the need for exports to conform to EU product standards is a scary big cost of Brexit. But by definition, all products currently exported to the EU conform to EU standards. This is a minor administrative change by any stretch of the imagination.

While it is certainly in the interests of the EU bureaucracy to make a Brexit as economically disruptive as possible in order to send a message to other countries, I think in reality this will be hard to do.

Also, calls for a second referendum seem pretty anti-democratic— "democracy is good, except when the stupid people vote for things I don't like".


These don’t seem like strong economic arguments against Brexit IHMO.

"No deal? Seven reasons why a WTO-only Brexit would be bad for Britain” https://t.co/SVLTaqEaEv
— Cameron Murray (@DrCameronMurray) November 19, 2018


Am I batshit mental? 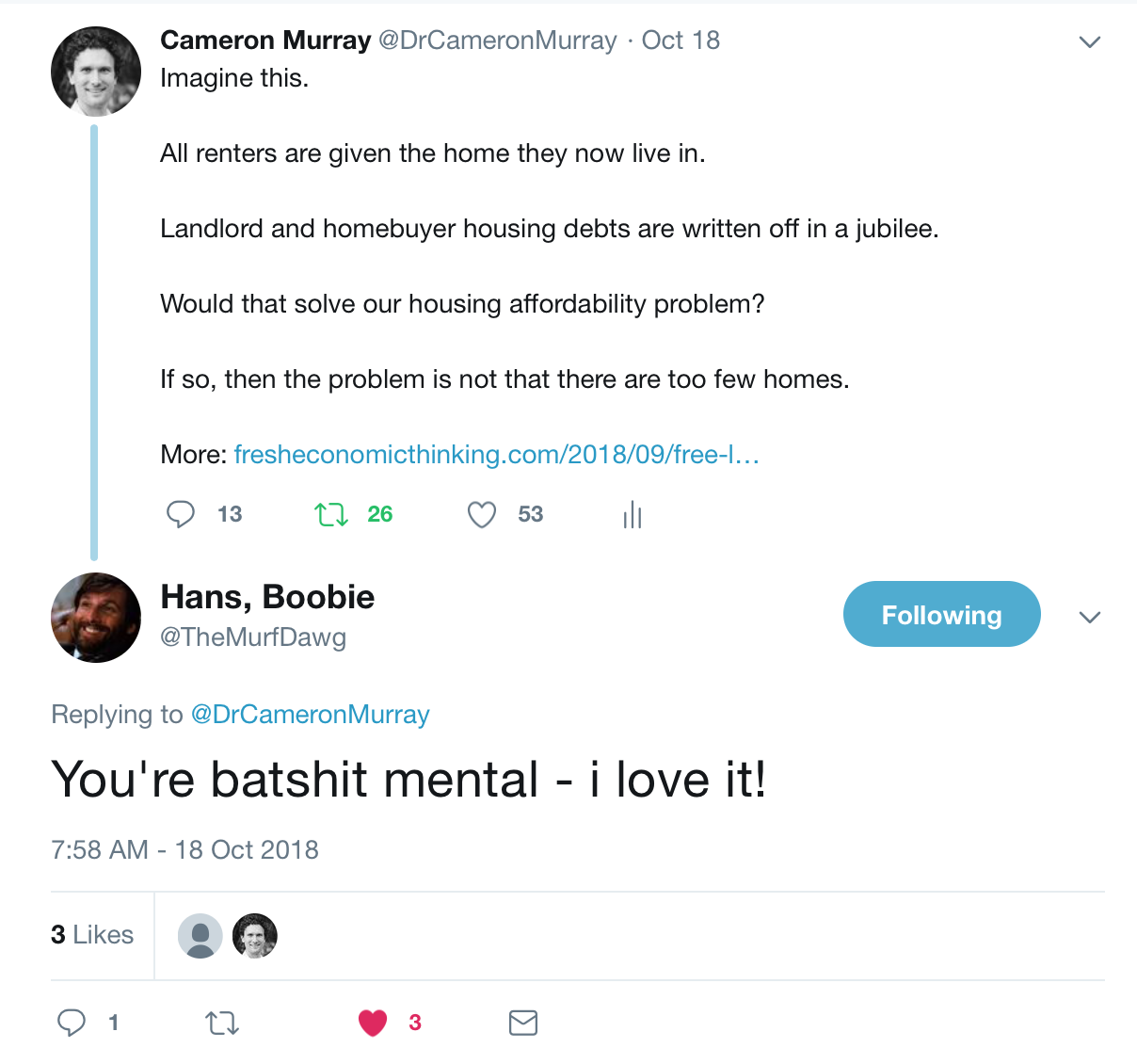 Or is it batshit mental to pretend the solution to a problem of badly distributed access to resources won't require redistribution of access to those resources?

Russ Roberts is an excellent interviewer and I thoroughly enjoy his Econtalk podcasts. But every time he talks about ‘bottom up’ solutions to organisational problems I immediately think “here comes tomorrow’s top-down rule that you are going to hate"!

Nobody is serious about higher wages

If you aren’t interested in unleashing enough government spending to decrease the unemployment rate to a number starting with a 3, or even 2, then you can't be that interested in increasing wages.

We were interested in this once. And being far richer than we were then, we could do an even better job today. If that’s what we wanted. 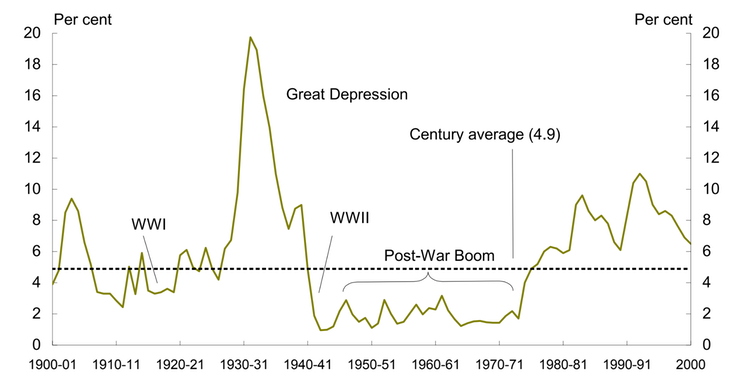 With such huge macro-level inefficiency from under-utilised resources, we should stop debating the microeconomic efficiency of government spending so much.
Just about anything, even digging holes and filling them in, is better than a 5%+ rate of unemployment with hundreds of thousands of underutilised workers.

Arguments from supporters of high population growth in Australia are that:
Sounds like something our stagnant regional towns could do with more of!

Ignoring the practicalities of internal borders, all of these arguments also favour an “immigrants to the regions” policy. After all, Australian cities are a small global region. Why argue for “immigration to the Sydney region” and not “immigration to the Tamworth region”?

For some reason, this is philosophically wrong rather than impractical, and immigration boosters seem happy to turn their economic arguments 180 degrees when the location of immigration changes.

Also, if you want public support for immigration, don't insult everyone who has concerns about the past decade of record high levels. Has insulting someone ever been persuasive?
Email ThisBlogThis!Share to TwitterShare to FacebookShare to Pinterest