This is an expanded version of an article first published at The Conversation.

Most think-tanks and policy groups in Australia think that a policy to swap ‘stamp duties for land value taxes’, or what I will call SD4LVT, is going to provide some impressive economic and housing benefits.

But layers of bad economics hide beneath the new populism of SD4LVT.

It is extremely frustrating to me that leading minds in Australian policy have smashed their heads together and decided that the best reform they can think of is to replace one good tax on property with another good tax on property that is less politically popular. It's like subbing off the best player on the field for the best player on the team? Why not sub off the worst player instead?

The better minds in this game don’t even think SD4LVT will have any effect on reducing housing prices or making housing at all more affordable, yet still put it forward as the ‘holy grail’ of state tax reform.

Is this some kind of joke?

The bad economics behind SD4LVT arises because four key points are missing or overlooked.

The economic incidence of stamp duty is on the seller. This means that if you remove stamp duty, all else equal, prices will rise by exactly the amount of the duty. Good analysts know this, even if they rely on poor analysis by others that assumes stamp duty “increases the price that property buyers pay”. If the average home price is $500,000, and stamp duty is 5%, prices will immediately rise to $525,000 when you remove the duty.

But if you want to replace the same tax revenue from stamp duty with revenue from land value taxes, you could wind up inflating prices and inadvertently creating an economic transfer to property owners.

Imagine an example economy with:
To replace the $25,000 stamp duty revenue with a land value tax requires taxing all twenty homes at $1,250 per year each.

Whether the market price of homes rises or falls depends on whether buyers think the upfront present value of $1,250 per year is lower or higher than the $25,000 upfront stamp duty they would have paid. At a 5% capitalisation rate in this example, $1,250 per year in perpetuity is equivalent to $25,000 and the taxes replace each other perfectly with no price effect.

But what if turnover is half that, say 2.5%, which in this example would be where one house is sold every two years? Here, the total tax revenue to be replaced is $12,500, which equals just $625 per house in land tax.

If this situation happened nationally in Australia, that would be nearly a $200 billion economic transfer to landowners, which would completely offset the value of their new land tax obligations.

Taxing capital gains only happens when a transaction is made that realises gains. Thus, it is a transaction tax, just like stamp duty, though the size of the tax is related to historical changes to property values rather than current values. 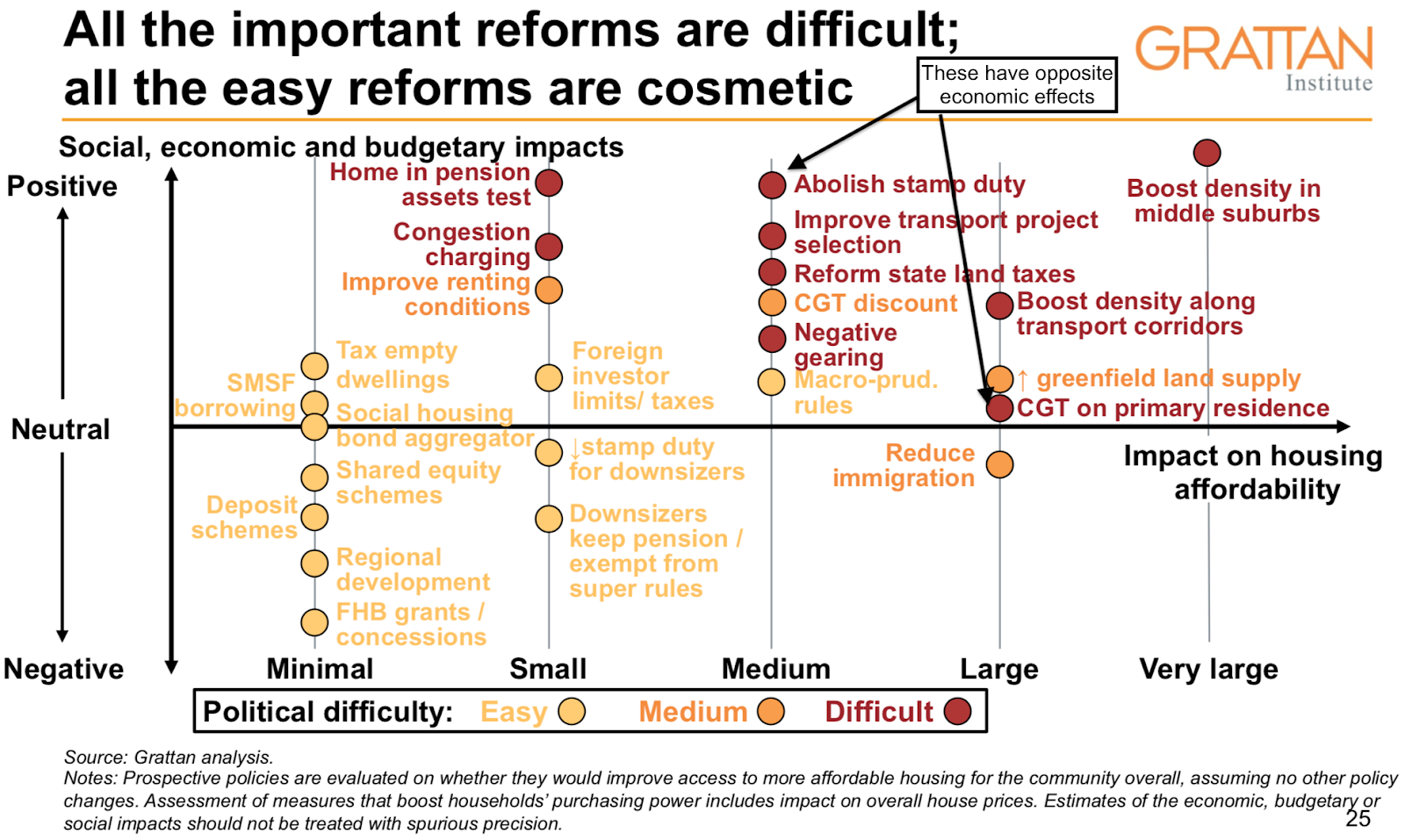 There are two problems with the ‘transaction costs impede household mobility and are bad’ view. First is the simplest. People who relocate for work generally don’t buy and sell houses to accommodate that move.

Moving for work is not a common reason for buying a home, regardless of age, which might reflect a view by some households that work is a temporary reason for moving and therefore not sufficient to commit to homeownership.

Thus, the effect of stamp duty on reducing housing turnover is likely to fall mostly on investors, who make up nearly half of housing transactions and can easily time their decisions. Transaction taxes make it more expensive for people to quickly buy and sell and deters speculative buying that seeks only to capitalise on short bursts of capital growth before selling, which itself fuels the capital growth and accentuates the bust. Many investors fall in this category, and many homeowners also make their location and purchase decisions based on expectations of capital gains rather than housing need. Go on, ask new homebuyers about property prices. See if they bought where they did for housing need or capital growth?

The evidence on stamp duty deterring moving shows pretty clearly that moving for work is unaffected, as the below plot shows, with the main effect being from people making 'short moves' by relocating less than 10km. Indeed, the best evidence on turnover effects estimates only the size of the short-term shock as people adjust to the new price equilibrium.

In terms of the claim lower stamp duty helps more efficiently use the stock of dwellings, as it reduces the costs to older people down-sizing, freeing up large homes for families, the evidence here is the opposite. When the ACT scrapped stamp duty for over-65s, the retirees who utilised the exemption bought bigger homes, rather than smaller ones, requiring them to implement a low value-cap on the exemption. After all, the distribution of home ownership is not driven by housing need, but primarily by wealth. Reducing the cost of redistributing housing by wealth will not suddenly make housing ownership less unequal.

Regardless, turnover as a whole seems relatively unaffected by stamp duties. The early 2000s boom also saw massive stamp duty increases yet turnover shot up dramatically. The role of stamp duty in these patterns of housing turnover is tiny compared to other factors. 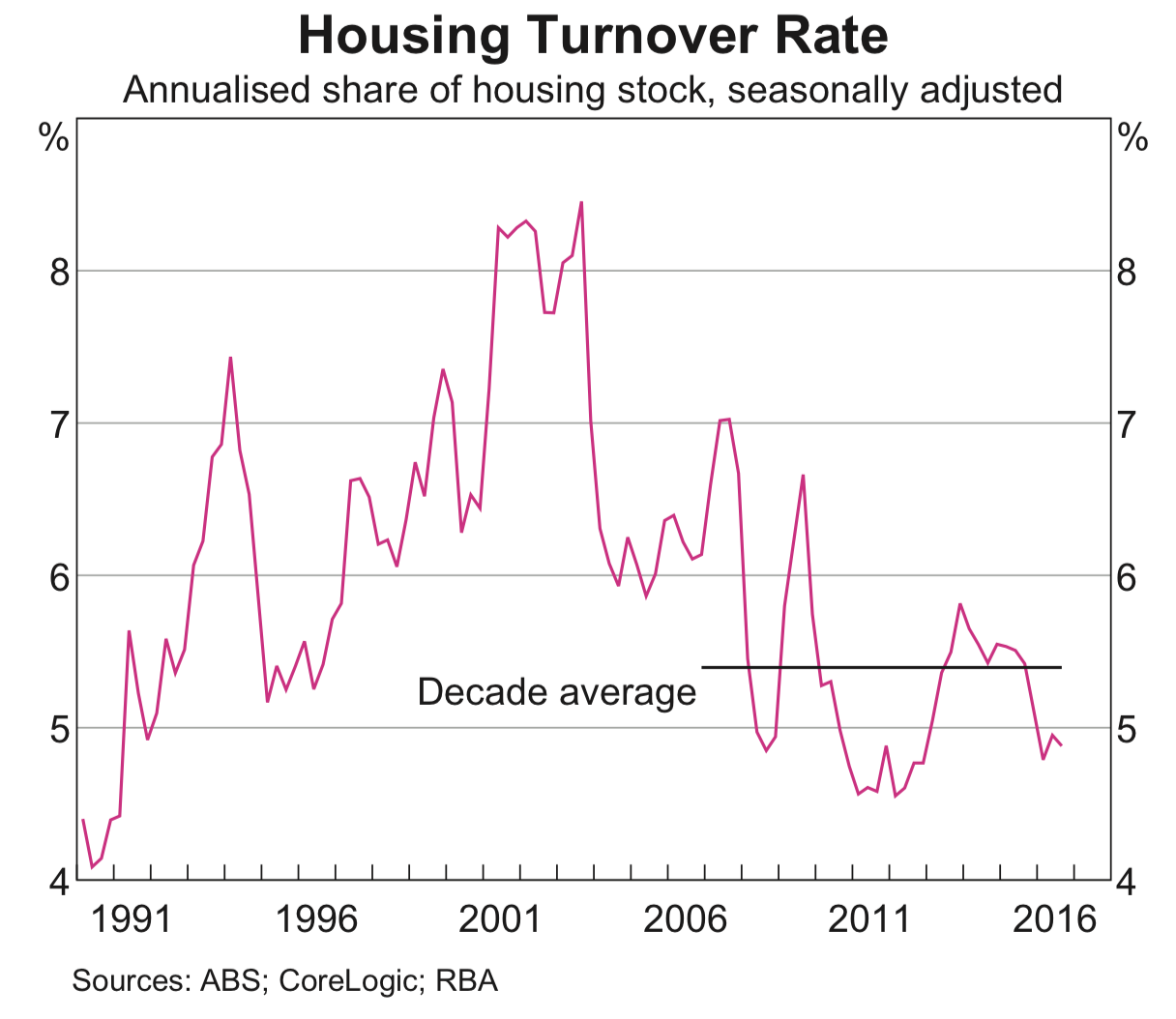 Indeed, if you want people to move more frequently for a lower cost then implement a ‘moving house subsidy’, which could also apply to renters. It would also help renters forced to move unnecessarily due to investor turnover (yes, stamp duty also reduces undesirable moves for renters).

Second, taxing capital gains on owner-occupied housing will be a far bigger transaction tax than stamp duty for most homeowners. Stamp duties are typically around 5% of the property price. For a homeowner who bought a home prior to 2012 in Sydney or Melbourne, their home has appreciated in value about 50%, or to put it another way, 33% of the current price is capital gain.

If a capital gains tax applied to their sale, the tax rate as a proportion of the current value would be:

This is triple the stamp duty for most properties. Even if the capital gains tax was discounted 50%, the nearly 80% of homeowners who bought prior to 2012 would still have much higher transaction costs from capital gains taxes than from stamp duties.

In effect, stamp duties are taxing some of the capital gains during a boom that would otherwise accrue to homeowners, particularly owner-occupiers who are exempt from the capital gains tax. This seems like a good thing to me.

So while stamp duties are often claimed to be economically costly because they deter households relocating, their main effect is actually reducing investor churn, which is a good thing for property market stability. Additionally, the costs of relocating are probably less than the costs from other property transaction taxes that opponents of stamp duty support.

Another concern in the discourse is that “stamp duty revenues are much more volatile than other taxes.” During a boom, revenues rise more than proportionally to prices since they depend on prices and turnover. Vice-versa in a bust.

If I was to think in the abstract about what sort of taxes are good macro-economically, I would say those that are pro-cyclical, meaning they automatically increase tax revenues during an economic boom, and decrease them in a bust. On this metric stamp duty is a terrific tax to help stabilise the economy, which is even more useful in Australia as our economic cycles are closely tied to the housing market.

The land value tax that many propose to replace stamp duty would have smaller automatic stabiliser characteristics, meaning the tax system as a whole would be less stabilising.

From what I can tell the call for more stable tax revenues is not driven by economic reasoning at all. At best it appears to rest on some kind of political preference for state governments not to be involved in macroeconomic objectives.

You might have even seen a chart similar to the one below, with stamp duties presented as having massive flow-on economy-wide costs compared to other taxes. In this example, stamp duty is apparently forty times more economically costly per dollar of revenue than council rates, which are also levied on property values. 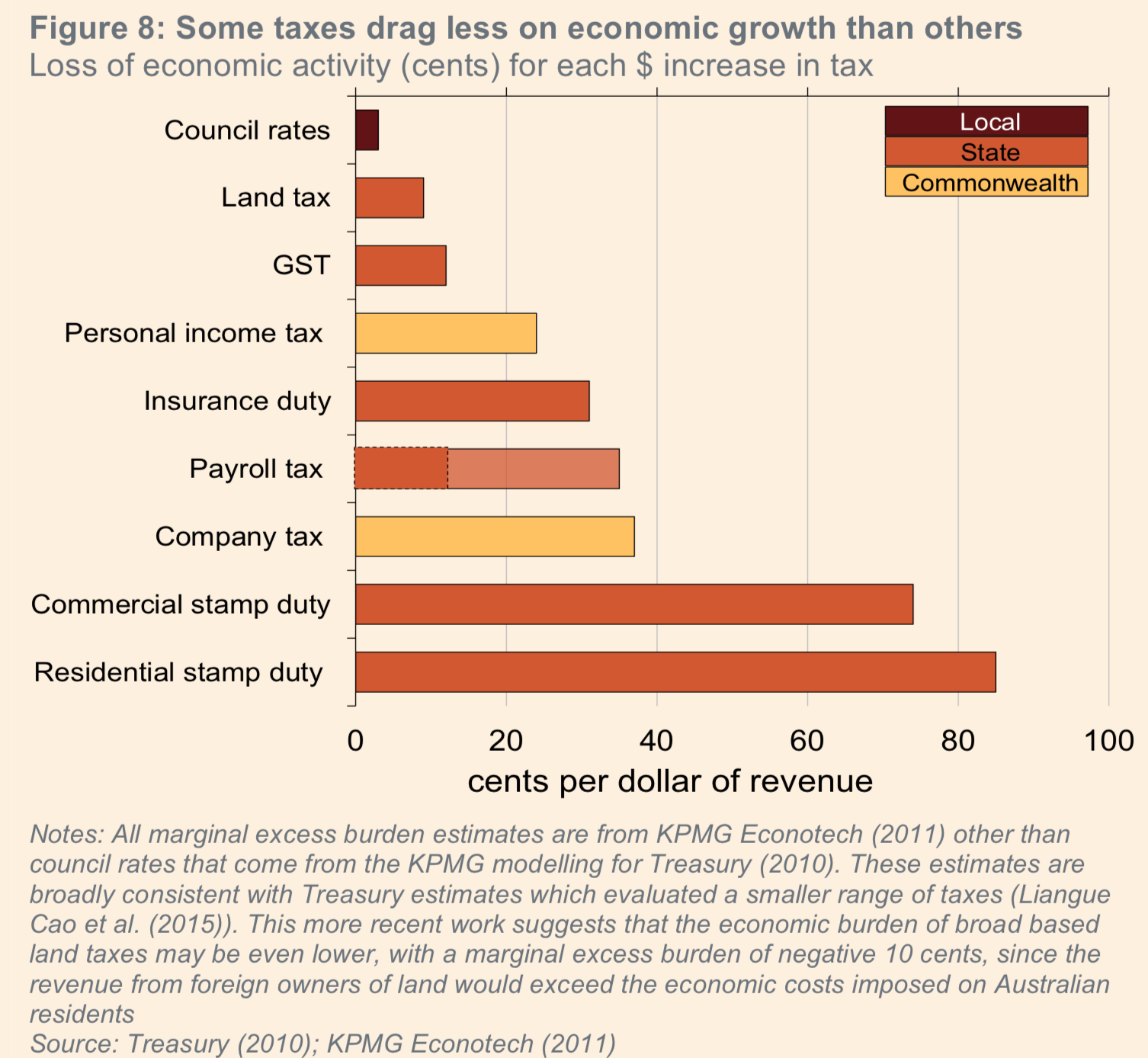 As you might have guessed, this is absolute nonsense. CGE models cannot account for transaction taxes because, wait for it, there are no transactions in these models. It’s true. Look it up.

But that hasn’t stopped many economists. Instead of using a better tool for the job, they simply invent a different thing that they pretend is stamp duty and put that into a CGE model.

Rather than a transaction tax that is incident on the seller, and therefore incident on land values, a key layer of bad economic analysis assumed this instead (p125).

It’s hard to explain in plain English what is going on in these models. My best explanation is that the model says that stamp duty forces every new home to be built with an additional extension on the house, where the construction cost of the extension is the same as the stamp duty. But then as soon as it is built, the extension is immediately demolished, yet somehow the buyer is forced to pay for it. Meanwhile, all the other households in the economy are somehow forced to also pay more to occupy their existing houses, as if they were now renting non-existent home extensions.

If that sounds crazy, that’s because it is. There is no actual economic evidence of broad economy-wide costs of stamp duties. Just garbage inventions that don’t look anything like stamp duties.

Stamp duties don’t reduce the cost of housing. They do reduce asset churn by investors and speculators, which is desirable for price stability, and the apparent economic costs from reducing household mobility are overblown. The ‘revenue instability’ of stamp duties is actually a huge positive for the economy as a whole, and the economic analysis that has underpinned the talk of the high economy-wide costs of stamp duty is simply made up.

All of this is true. Yet SD4LVT is the apparently the holy grail of Australian tax policy. Our best policy wonks want politicians to use up the precious political capital to swap one very good property taxes for another very good but electorally unpopular one, for no net economic gain.
Email ThisBlogThis!Share to TwitterShare to FacebookShare to Pinterest