The new politics of national identity

With nationalistic policies back on the agenda across the world, we should not underestimate the power of our collective belief in the nation-state in driving these political outcomes.

Beliefs matter. We have memorials for people who died to protect our nations, we are schooled in how great our country is, along with its customs, cultures, cuisines, national songs, flags and heroic origin stories. Many people are willing to die voluntarily for their belief in their nation.


As Dani Rodrik shows, people identify as a national citizen even more than they see themselves as a member of their local community (see below image). People believe in organising the world into nation-states, and feel their identity is most closely tied to them, more than anything. 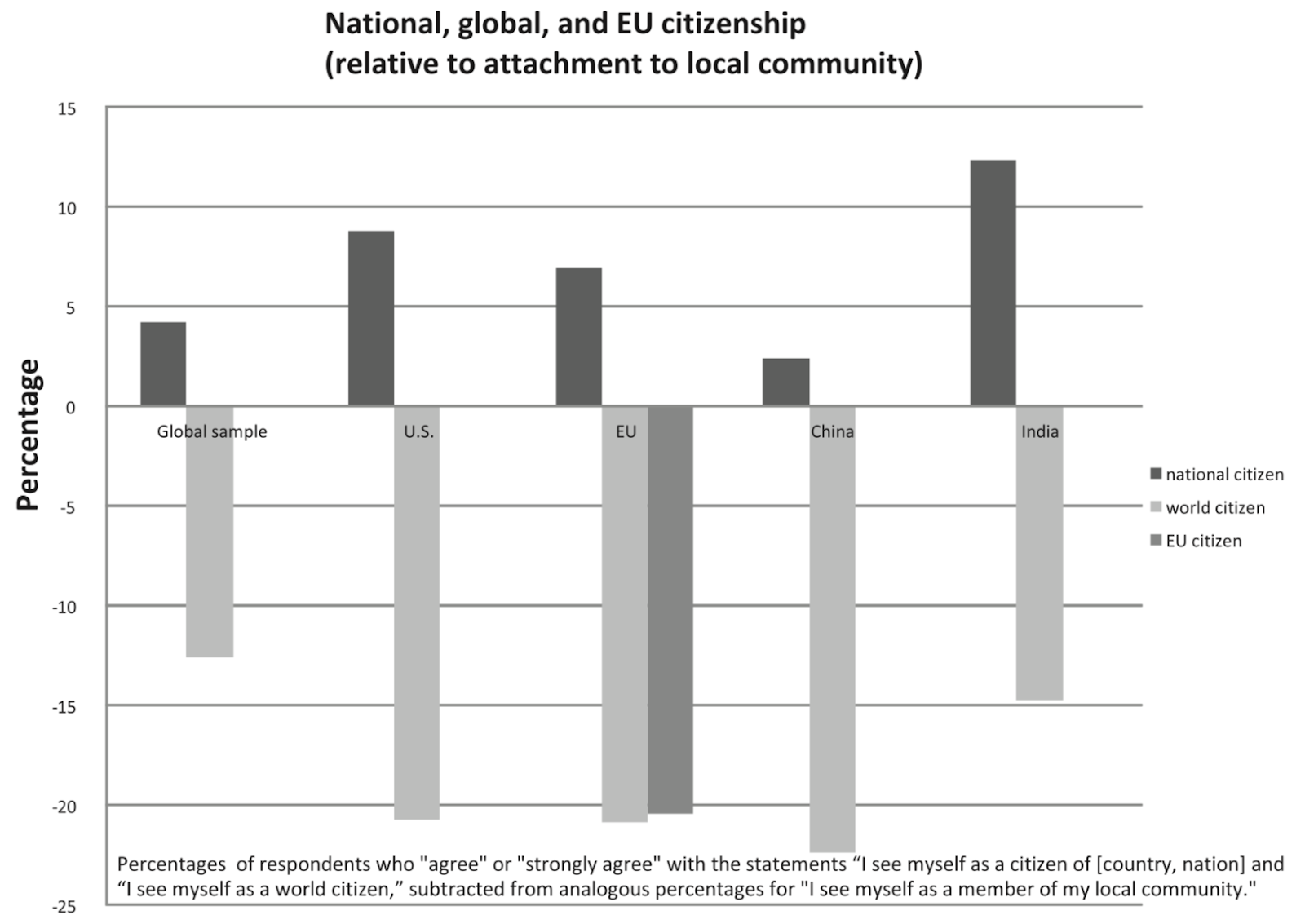 Underlying the social and political conflicts that have generated Trump, Brexit, and the far right leaders of Austria (Kurz) and Brazil (Bolsonaro), is a clash between these firmly held beliefs about who ‘we’ are as a nation and the economic globalists and elites who ‘look through’ borders and see only atomised people and trade. To their detriment, this second group has ignored the power that national belief has in organising society and culture.

The clash between these groups occurs on multiple fronts—on immigration, on trade policy and protection, and on social identity which manifests in multiple ways such as the backlash against political correctness further encroaching on firmly-held social identity beliefs (Halloween in Australia? That's not my Australia!).

From this point forward, fostering a cohesive national identity without triggering costly (and deadly) internal conflict between these two groups will be a delicate tightrope to walk. What makes it more difficult is that the conflict is not a traditional left-right political clash. The divisions seem hard to pin down for those accustomed to traditional political battlelines.

A concrete example is a proposal for a new public bank in Australia. The bank would take power away from 'globalist' privately owned banks to foster national investment and take back profits from the financial sector. It is a very nationalistic policy. Both the traditionally far left Green party wants such a bank, but so too does the far right Katter party. Both these parties, and other minor parties, also think Australia should not participate in the Trans-Pacific Partnership trade deal. Though they are arch rivals on the traditional left-right spectrum, the common ground here is national interest and national identity.

I have noticed that even my children can feel conflict over their growing belief in national identity. They are taught to both respect and aggrandise their country, but then look at their toys and ask me with a puzzled look “why is everything made in China?” Can the belief that our country is great be reconciled with the apparent reality that we are not actually great enough to make kids toys? Should they love China for making toys, or hate it for being a threat to their beliefs about the greatness of their home nation of Australia?

The current political battleground is over beliefs in the power of nations, and our identity as national citizens. Threats to this identity come in many forms: threats to origin stories (rewriting history curriculum in schools, changing national holidays), threats to customs and cuisine (adopting national celebrations of other countries, like the Lunar New Year, vegetarianism), and threats to how we present our identity to others (for example, gun laws remove personal self-reliance, but are also an attack on a national identity of self-reliance which fuels concerns about trade deficits).

It is also not a fight between the working class and the elites. The working class barely gets a say in politics at any time. It is elites against other elites (intra-elite competition as Peter Turchin would say). High-income business owners and professionals have played a crucial role in electing this new political order. Sure, these elites may have economic motives for trade protection, but it is their beliefs in the nation-state that attract a following across the social and economic spectrum.

Another mistake is thinking that actual policy details matter. As Scott Adams has noted:


If you think Trump's policies got him elected, you have to explain why his positions substantially changed during the campaign and he still won.

I will go so far as to say that Trump could have run as a Democrat, embraced Bernie Sanders's entire platform, and won the election anyway.

Is this rise of nationalism a problem?

That also depends on your beliefs. Anyone reading who instinctively baulked at this question (“What! How could it not be?”) should take note of how they feel. Beliefs about identity are potent. A similar gut-reaction is felt by many on questions of free trade or immigration, as they conflict with their beliefs.

If we are being honest, free trade these days is simply a belief, not an economically reasoned position. The irony that free trade requires thousands of pages of legal agreements is not lost on those who want trade managed in their national interest. Even world experts on trade acknowledge that the gains to further trade are limited, but the redistributive downsides to many are high. So why the belief? Why the gut reaction by one side that ‘free trade’ is good? Why make fun of people who want trade managed in their national interest or who think the economic effect of trade is more subtle than econ101 beliefs? The trade debate is symbolic of this clash of beliefs.

But the actual answer to the question of whether nationalism is a problem requires a belief about how our world should look in the future. If you see a future global state, with national borders dissolving over time, then it is a huge problem. If you see a future of nations pursuing their interests while cooperating on issues of mutual interest, then no, the rise of nationalism is not a problem but a timely reorientation towards your desired future. If the European experiment is anything to go by, even after decades, the belief in national identities massively dominates beliefs in supranational identity.

My main concern with the rise of nationalism is the internal conflict this clash of beliefs can generate. After all, beliefs reside within people, and if you are fighting for your beliefs it means fighting other people.

Take immigration. I personally want a world of nations that allow immigration and where countries foster an appreciation of diverse culture, cuisine, and customs that immigration brings. As an Australian in a mixed-race family, it is hard for me not to appreciate this.

But if you believe that high-immigration undermines your beliefs in your nation, then you will feel (literally feel) that you must fight back. I fear that this anger will be directed toward immigrants personally rather than the politicians who make the laws that govern immigration, and who aren’t reflecting your beliefs. The more that the globalist side calls people racist for these beliefs, the more enraged they become, and the more they double-down on all their pro-nationalistic beliefs.
That is how it works with beliefs. People die for them when they are threatened.

The nature of our beliefs and our identity makes it a real possibility that the European integration project will unravel surprisingly quickly as this identity-clash percolates through national political processes.

Take the scenario of a new financial panic engulfing Europe in the next few years. This triggers actual political progress on Brexit. While the current crop of politicians probably wants to delay Brexit (or avoid it), new parties and politicians who rise on a wave of nationalism will take the steps needed to leave the EU.

The UK suffers a sharp economic contraction, but the rest of Europe is also in the economic doldrums. Because of the pro-nationalistic spirit of the times, and the ability to use Brexit as an excuse, the UK government enacts large spending programs and subsidies for investment. They repay the nationalistic beliefs that brought them to power, and their economic revival is much faster than anyone expected.

The success of Brexit fuels nationalistic beliefs in other wealthy parts of Europe, and within a decade of the first domino falling, the European project unravels as wealthy nations leave the union and rebuild their national identities. A good guess of the sequence can be informed by the results of a recent Pew survey on how European nations regard their culture (read: identity) compared to others.

As the image below shows, the relatively wealthy EU countries that record higher levels of cultural superiority to the UK are Austria and Italy, who already have new nationalistic leaders. 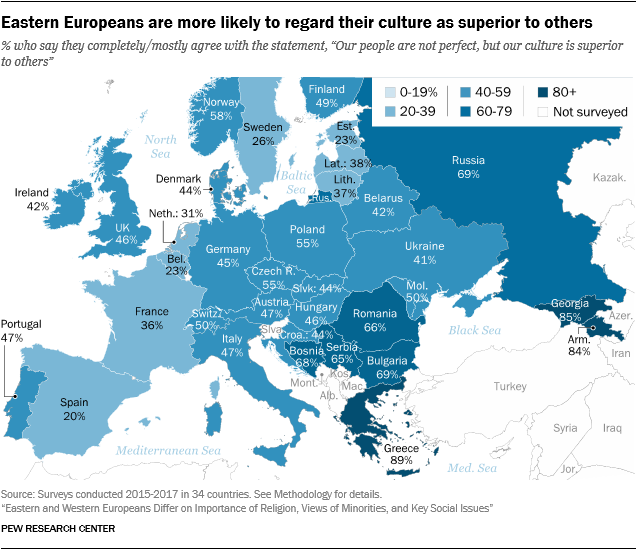 Does it have to be this way? Not at all. I am just taking the logic of beliefs and seeing where it could lead politically. But the world is complex. New leaders may rise who can walk the tightrope of validating beliefs in national identity while fostering domestic cohesiveness. They may find it possible to step out on the global stage and stand up for national interests rather than corporate interest. I would like to think that there is a possible future where strong national beliefs remain intact and are capitalised on to carefully reform industrial and trade policy, along with immigration and social policy, to reflect the national interest. This could happen by finding and promoting the common ground on both the far left and right to bring new allies together around a common belief in the nation-state.

Whatever the future, pretending that beliefs don't matter is wrong, and blaming economics or racism for the current situation is naive. Thinking that lambasting others with 'your facts' will change beliefs is also wrong. Beliefs can only be updated with new beliefs. And for that, we need to gently carve out new inclusive national identities.