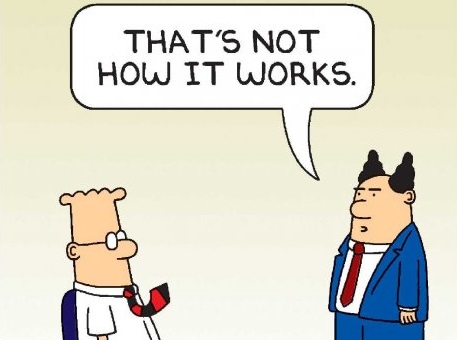 Review of Win Bigly: Persuasion in a World Where Facts Don’t Matter

I can save you $13 and summarise this book for you — a rich white guy from New York dating a model half his age who didn’t travel outside of North America till age 59 finds Donald Trump persuasive.

There is more to it than that. But according to Win Bigly’s author Scott Adams, the first piece of information about a topic matters when it comes to persuading. It’s called Anchoring.

On its surface Win Bigly is a lesson in the art of persuasion. Adams uses his experience blogging about the total misreading of Trump’s election persuasion by the established media as a backdrop to his own lessons in persuasion. He also provides a language to help understand and communicate persuasion techniques — The High-Ground Manoeuvre, Two Ways To Win and No Way to Lose, Setting The Table, Visual Persuasion. It’s all good stuff. To anyone who has an interest in cognitive science (not many of us), and skills in objectivity (even fewer of us), a lot of the book is a well-packaged presentation of established material paired with Adams’ persuasion hunches. For everyone else, you will find a lot of new and interesting stuff in there.

I probably enjoyed the book more because I have some views in common with Adams that few seem to share. For example, for years I have been bamboozled by people who have a love of facts yet continually try to persuade with facts. The facts are clear on this — facts don’t persuade. So why ignore this if you are a fact-lover? One of Adams’ main points, as you might have guessed from the title, is exactly this.

I also wrote about the misreading of Trump here. And of Brexit here. So I clearly do identify with Adams, which gives him a headstart in his persuasion.

But while I agree with much of his analysis of Trump’s persuasion methods, Adams persuaded me that he is, like many (most?), a bit of selfish bloke with a chip on his shoulder. This explains my opening sentence.

You see, despite repeated humble-brags throughout the book, ‘good guy’ Adams ends by changing the tone and being a dick about Clinton’s proposed estate tax, responding to it as follows.


This was personal. I started life with almost nothing and worked seven days a week for decades to build the wealth I have now. I wasn’t in the mood to let the government decide what happens to my money when I die.
...
But once Clinton announced her plans to use government force to rob me on my deathbed, it was war.

He also recites the nonsense double taxation myth favoured by one-percenters. Maybe it is good persuasion if your audience is other rich people or those who believe they will be rich when they die. To me, an expert in economics and taxation, it is idiotic and stupid. Inheritance taxes make the world better and fairer. These views starkly reveal a naivety and selfishness. It shows me that for all the interesting things in the book that I agree with, a lot of Adams’ filter of the world seems to be him identifying as a rich guy with German heritage and conservative tendencies who wanted Trump to win to validate that. He was very lucky to get his prediction right. As he admits.

Maybe one reason that I have had this reaction is that unlike most readers of Win Bigly I am simultaneously reading The Great Leveler: Violence and the history of inequality from the Stone Age to the twenty-first century. But that’s another story.

The book is worth a read if you want to better understand the Trump phenomena. It may persuade you to drop some of your beliefs in “facts” that don’t really stand up to scrutiny. But for all the insight in the book, I guess I was disappointed to see that even those most alert to our tendency to believe in myths, or facts that suit our own interests, are driven by their own myths.

Postscript
One thing I have always found strange is how rich conservatives who ‘worked hard for their money’ want their children to never have to by leaving massive inheritances. At the same time, many will promote how noble the experience of poverty and hard work is for everyone else’s children. Such reasoning ignores the fact that plenty of people have usually worked harder for less money — after all if Scott Adams went on strike no one would declare it a State emergency. Apparently, you get what you deserve in life because you work hard for it, unless, of course, you are born into the right family. Life isn’t fair. But that doesn’t mean we shouldn’t make it fairer if we can.
No comments: Links to this post
Email ThisBlogThis!Share to TwitterShare to FacebookShare to Pinterest
Newer Posts Older Posts Home
Subscribe to: Posts (Atom)