A random physicist takes on economics

Jason Smith, a random physicist, has a new book out where he takes aim at some of the core foundations of microeconomics. I encourage every economist out there to open their mind, read it, and genuinely consider the implications of this new approach.

Go get it now. It only costs a few bucks. 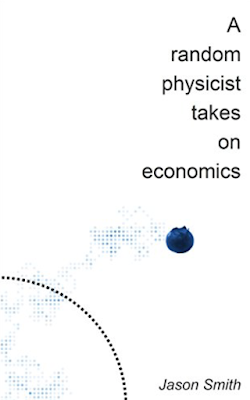 So what do I think? His approach is exactly what economics needs - a set of fresh eyes on the basics.[1]

The book is, fundamentally, an introduction to Smith's new view of what I would call ‘microeconomics as the emergent characteristic of random agents in constrained situations’. Or, more simply put, why you don’t need rational decision-makers for a useful economic theory that makes good predictions.

To get some sense of why this is important, economists are often criticised for getting the big picture stuff of macroeconomics wrong, like missing the financial crisis. But in reality, the economic micro-level stuff, about responding to relative prices, making choices based on incomes and preferences, is also a failure built on an elaborate, but highly questionable, theoretical structure.

Smith says that this theoretical structure is unnecessary. In fact, he says, people acting randomly within their budget will have the emergent property of behaving ‘as if’ they comply with the rational economic model. That is, humans are irrational at the individual level, but the fact that our choices are constrained by our incomes means that in aggregate, the average behaviour responds to external changes in a similar manner to that of the mythical rational person.

To get a feeling for this, consider the graph below from one of Smith's favourite economics paper by Gary Becker, which made similar points. For those who haven't guessed what it shows, the X and Y axes are the amount of consumption of two goods, and the lines C-D and A-B are the budget constraints (i.e. how much of each good, or combination of goods, can be bought) at two different sets of relative prices. The line C-D has a lower price of good Y, and a higher price of good X, than the line A-B. 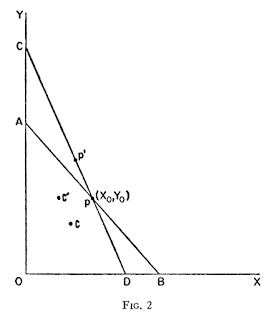 The point C is the centre of the triangle A-B-0. So if people consume randomly within that budget constraint at those prices, the average person will consume a combination of goods near point C. When the budget constraint changes to C-D, the new centre point is C'. This shift, from C to C', is very similar to the shift p to p', which is what would be expected under the standard theory utility maximisation.

Just taking the average of random choices within the budget constraint predicts the same patterns as utility maximisation, without requiring any knowledge of individual behaviour. When the price of good Y declines, people consume more of it, and vice-versa for good X, whether people act randomly or as utility maximisers.

Smith's (and Becker's) simpler approach reframes traditional micro-level topics as the emergent behaviour they are, and leaves the quirky patterns within individual choices to the realm of psychology. This approach makes perfect sense to me.

However, I highly doubt that this idea will be picked up in a hurry by the economics profession for a couple of main reasons. First, it gives away the big prize of economics-- utility and social welfare. If people just behave randomly at an individual level, it breaks the important link between individual choices, higher utility, and social welfare, which forms the backbone of economic thinking, and gives the profession the claim to power in political debates. No longer will economists be the only ones to proclaim that they know the secrets to a better (or higher utility/welfare) society. In fact, they will have to admit that they don’t.

Second, it removes the ability to blame bad choices by individuals as the cause of their economic destiny. If our theory of microeconomics is that people behave randomly within constraints, then to improve outcomes for certain groups of people, we need to change the nature of their constraints, not their decisions. These constraints could be income, wealth, social status and relationships, etc. Solutions to inequality, to homelessness, and other social problems are immediately redirected by this theory back to society at large, and the rules and systems we put in place to create constraints on individuals.

I highly recommend the read. When I finished the book, however, my mind was racing with more ways in which this approach could be applied in more ways across economic topics.

Finally, if you want to read more, you can read Smith's more detailed and technical attempt at piecing together this new approach here.

fn.[1] As a brief disclaimer, I have followed the author's terrific blog for quite a while. I make a point of keeping an eye on original thinkers in general, and he certainly is one, though I’ve never met Smith in person.
Email ThisBlogThis!Share to TwitterShare to FacebookShare to Pinterest