Do economists even know what firms do?

Standard economic theory says that firms maximise profits, or revenue minus costs. I had always taken this to be a self-evident truth given how entrenched in economic thought it is.

But when we unpick what it really means we encounter problems and contradictions that are rarely discussed, and that undermine the core of the theory itself.

Yet the same logic applies to all the additional costs necessary to vary output in a firm. Each level of output requires different total input costs. Therefore, making a comparison between two output levels must consider alternative uses of any additional costs. Maximising profits without any consideration of the size of the costs incurred to obtain them makes no sense. But this logic still forms the core economic theory of what firms do when they choose how much to produce.

The only way to appropriately compare between projects of different sizes is to fully account for the opportunity cost of any extra costs if they were instead invested elsewhere. In this case, the optimal choice for a project is to produce at a level that maximises the rate of return on all costs, or profits divided by costs.

This is quite similar in many ways to choosing projects based on their profitability index, which is the NPV of future positive cash flows divided by the current costs.

I call this decision process return-seeking, and it is the focus of a working paper I have written with my colleague Brendan Markey-Towler. What is striking is how different the expected behaviour of a return-seeking firm is compared to a profit-maximising one, despite the relatively minor change in their objective. In general, this helps bridge some of the long-existing gap between the economic model of firm production behaviour, and the empirical realities of firm behaviour.

An example
To further explain this hidden contradiction within profit-maximisation by way of example, consider following the choice of output for a firm.

For the economically-trained it is clear that such a choice is the logical result of a situation where this project has rising marginal (and average) costs beyond 10 units of output, and where the marginal cost curve meets the demand curve (red) at q=20, and where at that point the average cost is $0.85.

It is the standard textbook treatment. And in this standard profit-maximisation view the extra dollar of profit available in Panel B should be sought even though it costs an extra $9 to get it. The extra costs required to earn the extra profits are ignored.

This is a problem.

So let us now take a step back and look how to evaluate whether spending $17 to make more profit by choosing Panel B is worthwhile.

In the panels below I show the project choices with an output of 10 units and of 20 units, in addition to two other project choices, C and D, that are potential alternative investment opportunities in the marketplace. If I now compare the true opportunity cost of the $17 necessary to take option B, I can see that if I had those resources to spend, I could invest in Panel A, C and D together, and make $4.30 profit on my $17.

Also note that Panel C is simply a duplication of the project in Panel A, which is there to make the point that to get double the output without increasing average costs, one can always duplicate their existing capital project. 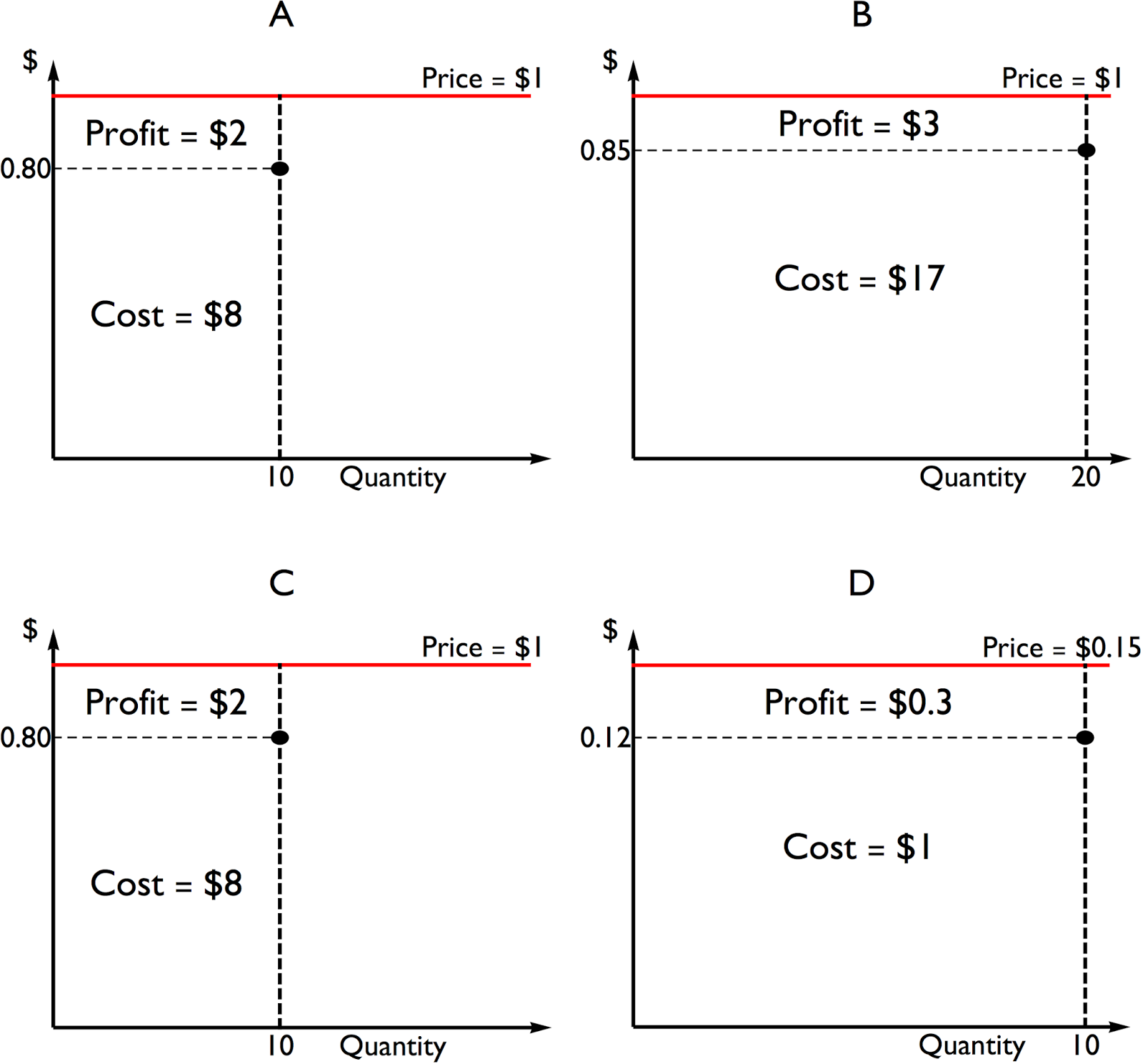 The point here is that each dollar used to cover variable costs to increase the output of a project could be used to purchase new capital goods instead or invest in alternative projects, which could get a higher rate of return than it does at the margin by expanding the output of the single project.

Where there are alternative opportunities for investment of these inputs costs, the logical thing to do is to make decisions about the output quantities of each capital project based on maximising the rate of return on all costs of each. This way, each scarce dollar is directed most effectively to maximising both its own profit and its overall rate of return. That is, the profit of each dollar of input is maximised.

Think of it this way
An intuitive story that clarifies the logic of the return-seeking model starts with imagining that every dollar of cost necessary for a firm to spend on production comes from a different investor. To expand output in the face of increasing cost you need to add more investors, who share profits in proportion to their contribution. You do this only if the overall rate of return on the total costs is increasing. Once you hit that maximum rate of return, adding additional investors to cover greater costs reduces both profits and returns for existing investors.

Overall, return-seeking is actually not much different to the standard view. All it does is make explicit the implicit denominator of fixed capital that exists the short-run profit maximisation model, and say that all costs (not just capital costs) have the option to be capital in alternative projects.

Making sense of economies of scale
What makes the return-seeking model interesting is that it precludes projects that do not have any economies of scale. If costs are always rising with output, the rate of return on costs can be increased by decreasing the output of the project.

Below I change our example to show a modified project that does not exhibit economies of scale. If output is one, as per the new Panel A, the unit cost is lowest and the rate of return is highest, at 33%. Here, the choice confronting the firm if it wishes to expand output is whether the extra $7.25 in cost necessary to get to Panel B is better spent on investing in nine new extra firms like Panel A, producing one unit each at a cost of $0.75. Clearly producing 10 units of output with ten projects like Panel A is superior, as it makes more profit ($2.50) on less cost ($7.50), and maintains the high 33% rate of return of all costs incurred.

Overall, the view of firms as return-seekers gives a new way to look at how output choices might be made. Indeed, one of the great problems of the standard profit maximisation view is that it rarely matches the empirical record, which includes evidence from surveys of firm managers about their output and pricing decisions. Return-seeking does, in fact, match many of these empirical results more closely, and could offer clues about how to bridge the reality gap between the economic model and real economic decisions.

Read more about return-seeking in our paper, and see some previous blog discussions of this idea here, here, and here.
Email ThisBlogThis!Share to TwitterShare to FacebookShare to Pinterest