Revisiting the mathematics of economic expectations

The below presentation by Dr Ole Peters opened my mind. If there was one thing I believed was reasonable about economics, it was the assumption that expectation values upon which agents base their decisions are the “ensemble mean” of a large number of draws from a distribution.

Surely there is nothing about this simple method that could undermine the main conclusions of rational expectations? Surely this is a logical benchmark, regardless of whether actual human behaviour deviates from it.

But now I’m not so sure. Below is a video of Dr Peters making the case that non-ergodicity of many economic processes means that taking the ensemble mean as an expectation for an individual is probably not a good, or rational, expectation upon which to base your decisions.

I encourage you to watch it all.

But many processes are not like this. You cannot just keep making the same gamble over time and expect to converge to the mean of the result that you get if you made that gamble independently many times.

An example
Peter’s example is this. You start with a $100 balance. You flip a coin. Heads means you win 50% of your current balance. Tails means you lose 40%. Then repeat.

The ensemble expectation is that this process will generate a 5% compound growth rate over time.
But if I start this process and keep playing long enough over time, I will never converge to that 5% expectation. The process is non-ergodic.

In the left graph below I show in blue the ensemble mean at each period of a simulation of 40,000 runs of this process for 100 time periods (on a log scale). It looks just like our 5% compound growth rate (as it should).

The dashed orange lines are 10 sample runs of the simulation. Notably, the distribution of those runs is heavily biased towards low final balances, with a median payoff after 100 rounds of $0.52 Recall that the starting balance was $100, so this is a 99.5% loss of your original balance. 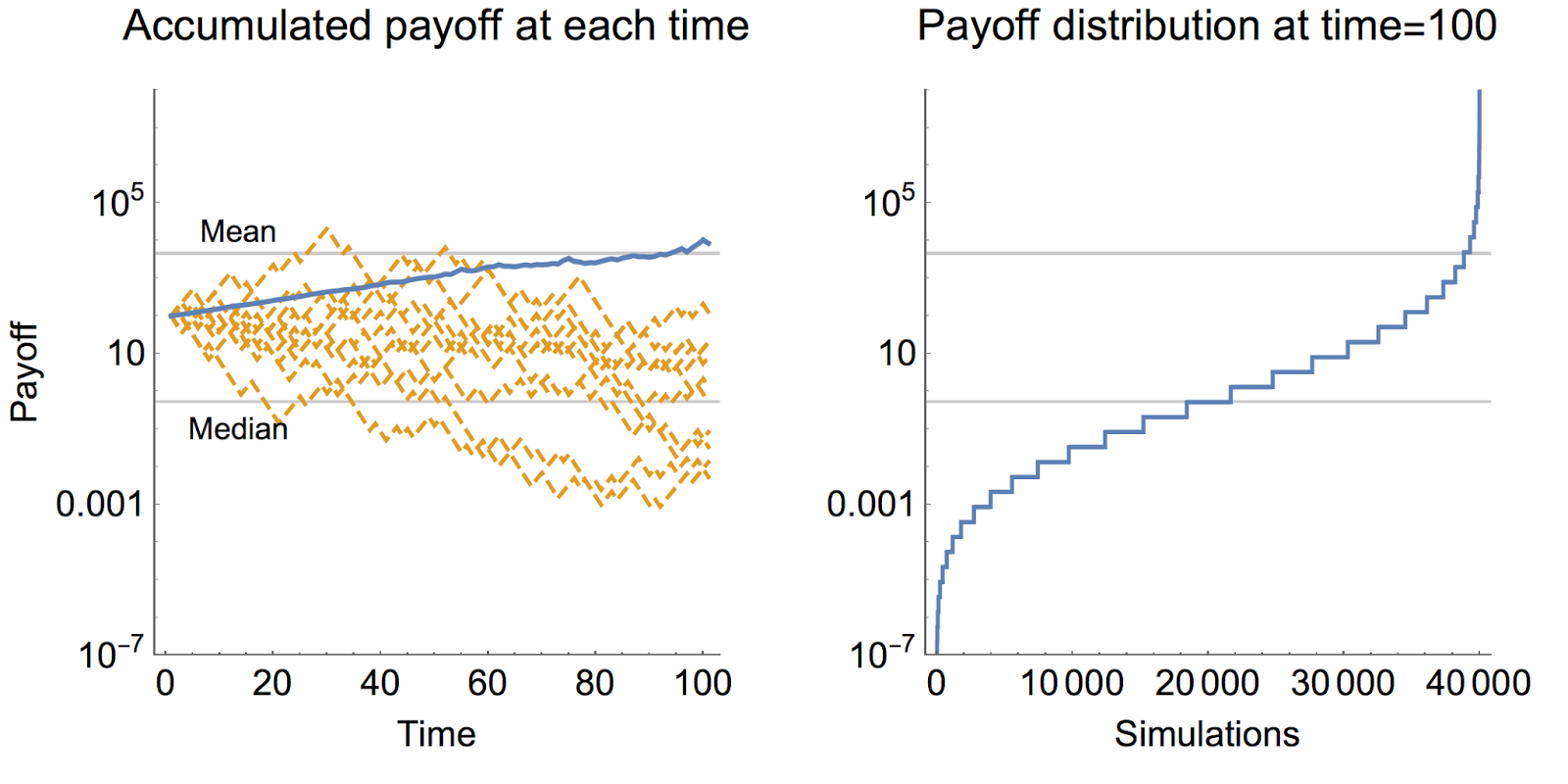 The right-hand graph shows the final round balances of the 40,000 simulations on a log scale. You can read more about the mathematics here.

If almost everybody losses from this process, how can the ensemble mean of 5% compound growth be a reasonable expectation value? It cannot. For someone who is only going to experience a single path through a non-ergodic process, who has a finite budget to play with, basing your behaviour on an expectation using the ensemble mean probably won’t be an effective way to navigate economic processes that are non-ergodic [2].

Lessons for Economics
I see two areas of economics where we may have been misled by thinking of the ensemble mean as a reasonable expectation.

First is a very micro level concern: behavioural biases. The whole idea of endowment effects and loss-aversion make sense in a world dominated by non-ergodic processes. We hate losing what we have because it decreases our ability to make future gains. Mathematics tells us we should avoid being on one of the many losing trajectories in a non-ergodic process.

Retirement and disability support schemes are social insurance schemes. They pool the resources of those lucky enough to be able to earn money at each point in time and transfer it to those that are unable to.

But there has been a big trend towards self-insurance for retirement. In the US they are 401k plans, and in Australia there are superannuation schemes. The idea of these schemes is that rather than pooling with others at each point in time (as in public pension systems), why not pool with your past and future self to smooth out your income?

You can immediately see the problem here. If the process of earning and saving is non-ergodic and similar in character to the example above, such a system won’t be able to replace public pensions at all. Many earning and saving paths of individuals will never recover during their working life to support their retirement. Unless you want the poor elderly living on the street, some public retirement insurance will be necessary.

Undoubtedly there are many more areas of economics where this subtle shift in thinking can help improve out understanding of the world. I’m thinking especially about Gigerenzer’s idea of a heuristics approach as a generally effective way for humans to navigate non-ergodic processes.
I will leave the last word to Robert Solow, who has had similar misgivings (for over 30 years!) about our assumptions of ergodicity (a stationary stochastic process) which undermine rational expectations.

Footnote [1]. He does not use the term, as it is often used in economics, to describe what is called the term Lucas critique, or in sociology is called performativity. Basically, it is the idea that the introducing a model of the world creates a reaction to that model. Take a sports example. As a basketball coach, I look at the past data and see that three-point shots should be taken more because they aren’t defended well. I then create plays (models) that capitalise on this. But because my opponents respond to the model, the success of the model is fleeting.

Footnote [2]. In theory, if you start with an infinitely small gamble, or have infinite wealth, you could ‘double down’ after a loss in such a process to regain the ensemble mean outcome.

Footnote [3]. Peters himself has a paper on The Insurance Puzzle. The puzzle is that if it is profitable to offer insurance, it is not profitable to get insurance. The typical solution invokes non-linear utility to solve it. Peters offers an alternative. My take is on the economic implications of this is that if people can individually smooth consumption through time for retirement than there is no logic to social insurance.

UPDATE (26/03/2017 9.10pm): On Twitter, it has been mentioned that I have simply restated the logic of the Kelly Criterion. This is true. The logic here, and there, is at odds with the naive way in which odds are translated into rational expected payoffs in economics. In fact, adopting the Kelly Criterion when playing the betting game in the above example generates an expected rate of growth of wealth over time of 8.65%, instead of negative 5.03%, and a far higher and narrower distribution of final period wealth outcomes. The paths of the simulation for betting under this condition, and the distribution of final period wealth, are shown in the below graphs. Notice that this strategy is highly effective at both changing the distribution of outcomes AND increasing the overall rate of growth of wealth. Regardless, the very fact that such a strategy is needed tells us that there is a problem with what a rational expected outcome should be for non-ergodic processes 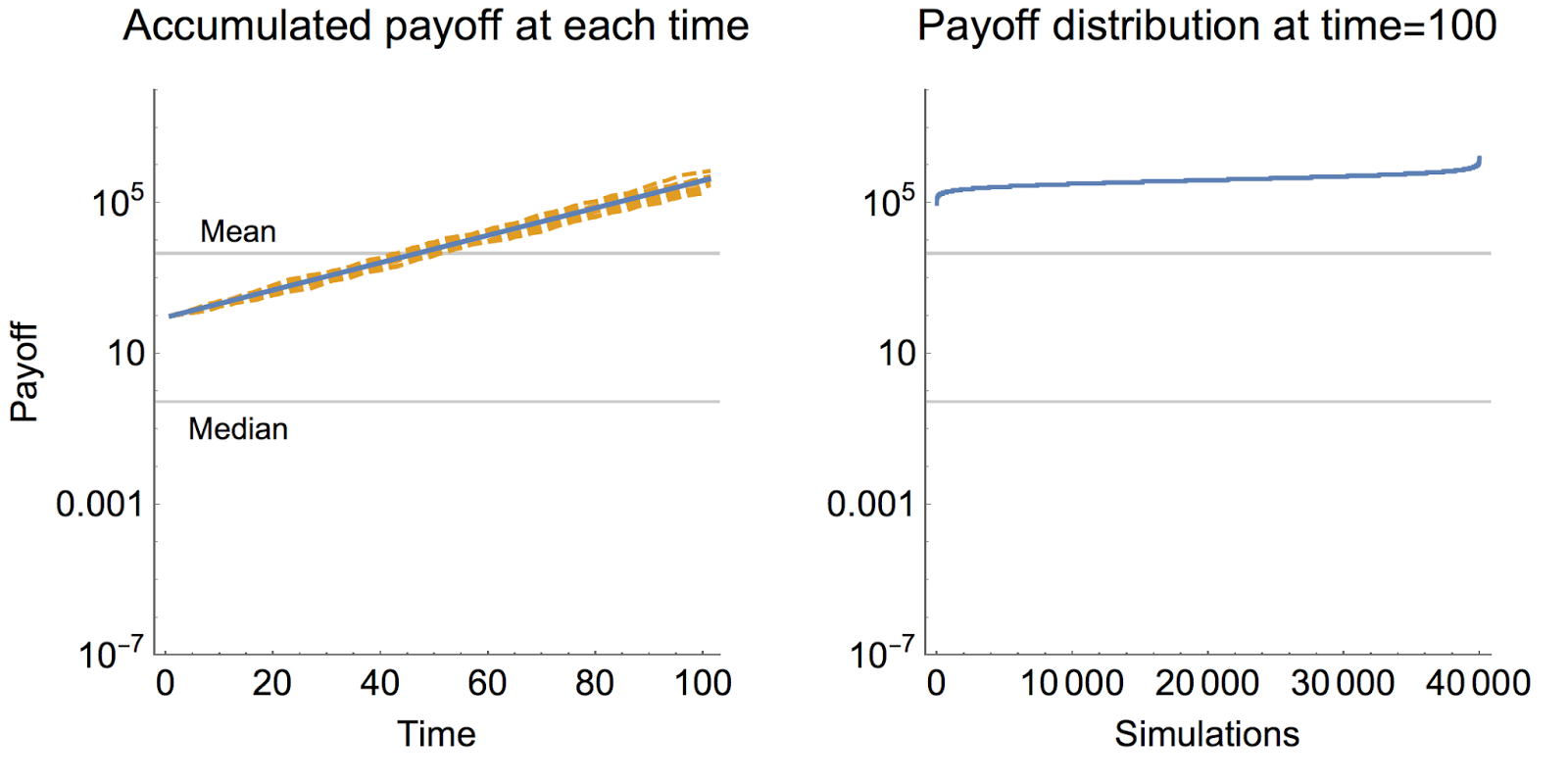