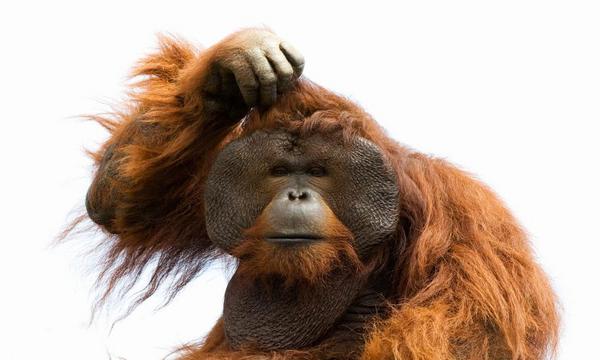 Basics
To think about company tax, we have to first understand it. These taxes apply to a type of entity run by humans with its own set of accounts called a company. That entity typically aims to make a profit each year, by making sure its revenues are above its costs, with some costs able to be amortised (or smoothed) across time in an accounting sense through depreciation, and in a financial sense, through borrowing and repaying debts.

Across Australia, company profits were about $230 billion in 2015-16, and company tax revenue was $65 billion.

Companies in Australia pay tax on their profits at 30%. If these profits are then transferred to the company owners, through a dividend, the owners of the company are credited for the tax already paid by the company and pay the difference between the company tax and their marginal rate.

So we have two important situations to consider if we want to know the effect of a company tax. First, the situation where a company pays all profits to its owner in a year. In this case, because the tax is credited against the tax payable by the person (or people) who own the company, the effective company tax rate is zero. It ceases to be of any relevance to any decision making internally (profits, or whatever objective, are still maximised) or externally (owners of companies can compare company performance before tax).

If this was the case all the time, company tax would be a none issue. With it or without it the net effects are the same, and if we err on the side of simplicity, we would get rid of it. There are no distributional or efficiency effects to worry about.

But the second case, where the company retains their profits on their own accounts, gets really interesting. And confusing for economists. Because it all happens in their big blind spot - financial assets.

An example
Let's simplify some more. In this second case, the company makes a $100 profits, they pay the company tax rate of 30% on it each year, then simply accumulate the remaining 70% of profits (the after-tax profits) in their own bank account.

The table below compares the with and without company tax scenarios where one year's profits are saved as assets on the company books and are therefore assets on the owner’s books. 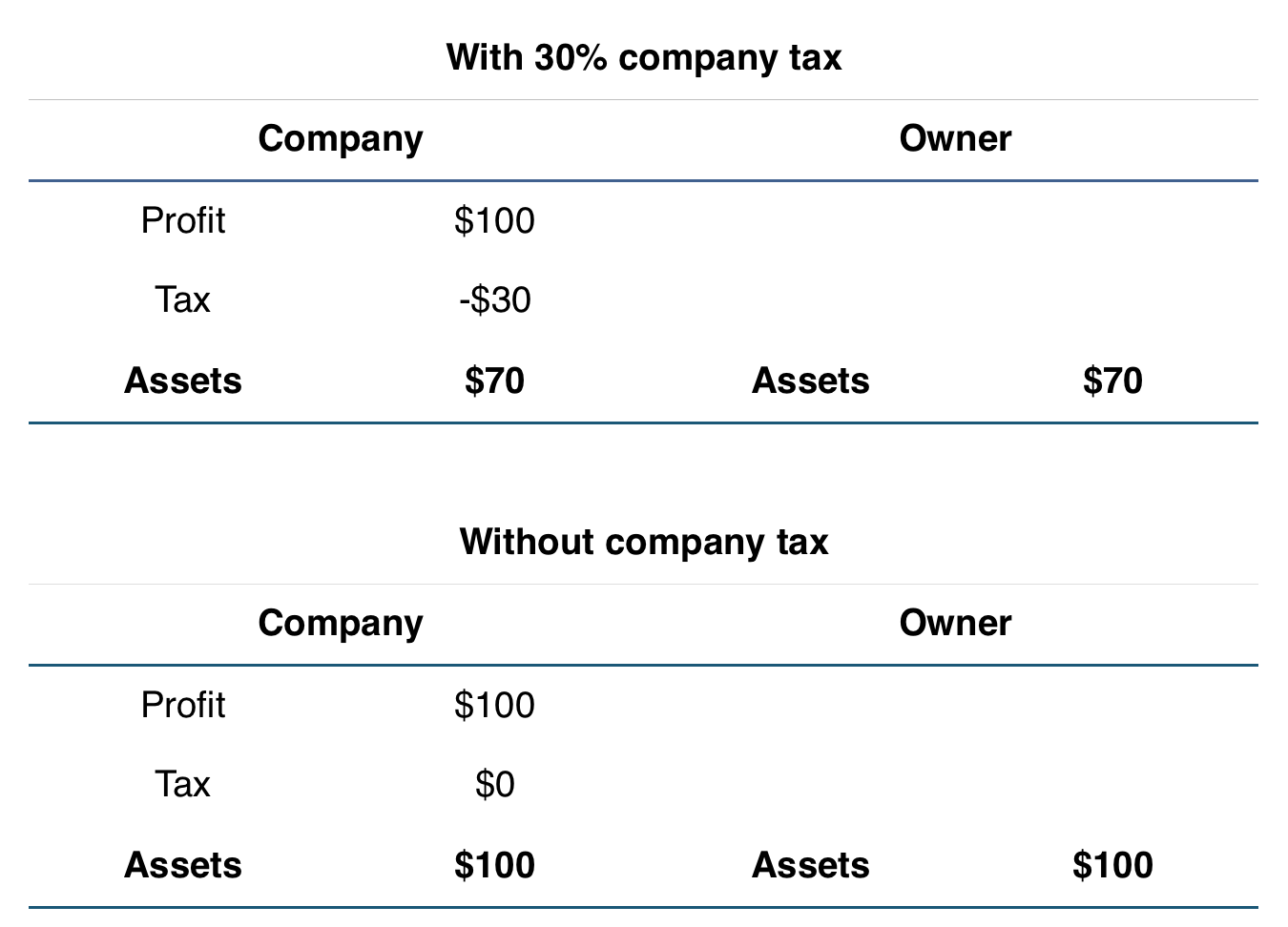 Notice what happens when we remove the company tax. It makes it easier for companies to accumulated assets with tax-free incomes, and thereby increase the wealth of their owners. Company tax is simply another way to tax wealth accumulation but on unrealised capital gains.

The "economic" logic
Now hold on there, says the little economist floating over my shoulder. Why would anyone want to own a company that increases in value without ever getting a dividend? What crazy economics is that?

It’s the type of economics that acknowledges that financial and asset markets even exist! After all, what purpose is there to run a business, or own a financial asset, except to accumulate wealth? If people weren’t interested in such things, there would be no super-rich people, they would have cashed out all their assets and spent the cash on faster cars, better aeroplanes, or bigger houses.

It’s the type of economics that acknowledges that people will own vacant land without building on it because it is an asset whose value rises over time.

But things get crazier still

The economic consensus is that taxing companies is bad because it reduces investment in new machines, buildings, vehicles, ships, and other capital equipment, thereby reducing the rate of growth of the economy. After all, it means it costs companies more to save a year’s income in their own accounts before spending it on new machines next year.

It’s one of those ideas that seems plausible on the surface. But in fact, one great way to avoid company tax is to make less profit by investing now in new machines and equipment—the exact economic incentive most economists claim comes from removing the tax!

A company that is not investing like crazy is likely to have more profits—they are probably lazy monopolists. I can think of a few, like Telstra, the banks, and some of the big miners.


I’m serious. Here’s a plot of Amazon’s profits. Notice the period of low and negative profits. That’s what you get when you are investing heavily in warehouses, robots, servers, IT, and other large capital projects that are the things that make us more productive in the future. It’s an example of avoiding company taxes by investing! 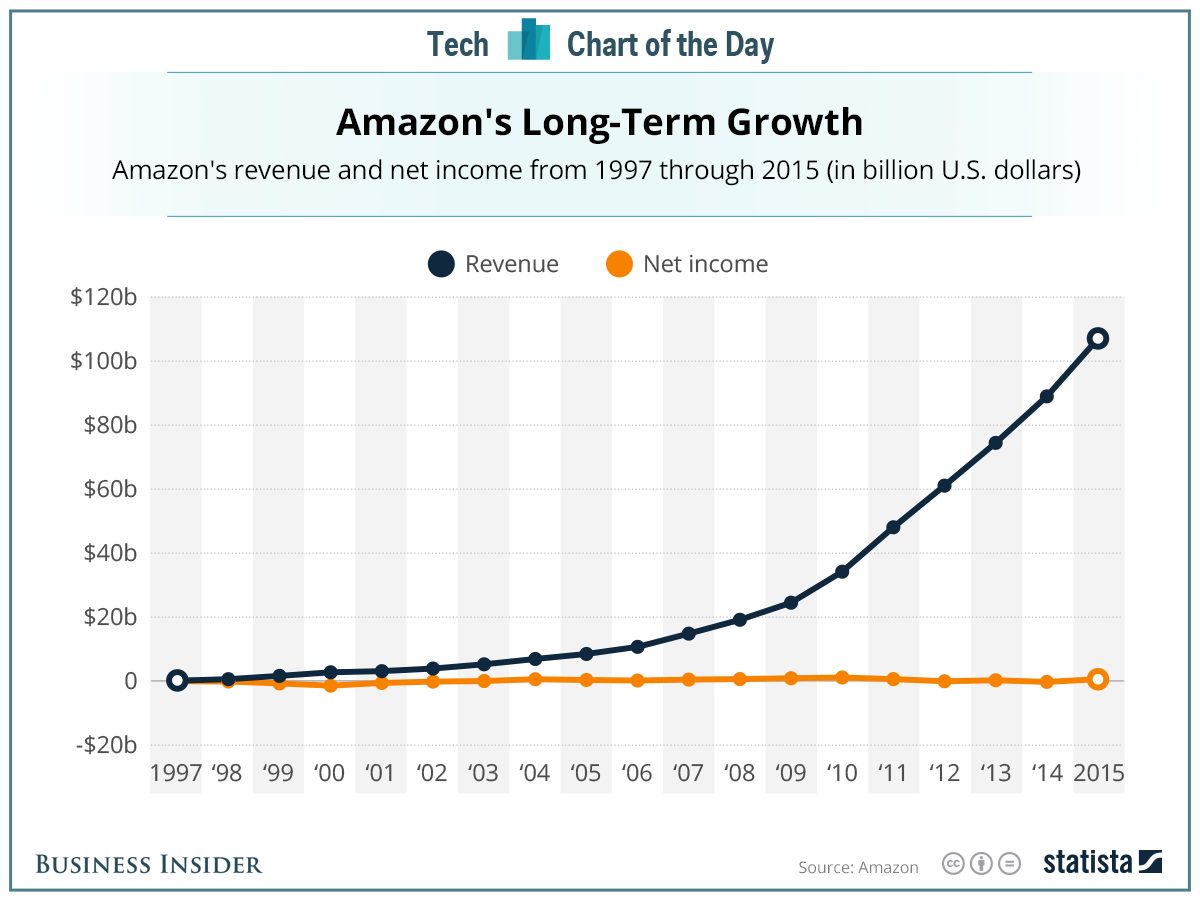 And yet, cutting company taxes is a love-in. Treasury likes it. Many think-tanks like it. Here’s Nick Gruen liking it. But they are all wrong. And they are wrong because their model conflates physical capital—machines, vehicles, buildings and equipment—with financial arrangements. You can’t tax a tractor. You tax only the profits of an entity that may own a tractor to help earn its revenue. The new tractor is a cost that reduces taxable profits!

The reason that so many economic models show efficiency gains from company tax cuts is… because they assume it in the first place! They assume that any additional profits kept by the company will all be used to invest in new machines and equipment.

So the efficiency gains all but evaporate if you don’t assume them and actually look at how company taxes actually work.

Gifts from the people
Lastly, what about the distributional effects? I have shown in the table above how company owners will be able to accumulate wealth in the company entity and avoid taxes altogether. But The Australia Institute has gone further and shown that the major beneficiaries are the big banks, who get $7.4 billion over the next ten years, as well as the US government through its tax system, because of offsetting arrangements used for companies who have already paid tax in other countries, like Australia!

Cutting the company tax will be a multi-billion dollar gift from with working class to the super-wealthy. If it goes ahead, prepare for Australia to catch up to the world in our political backlash against the establishment!

UPDATE:
The below meme came across my screen on Facebook. Don't know if it an real quote but the argument is true. 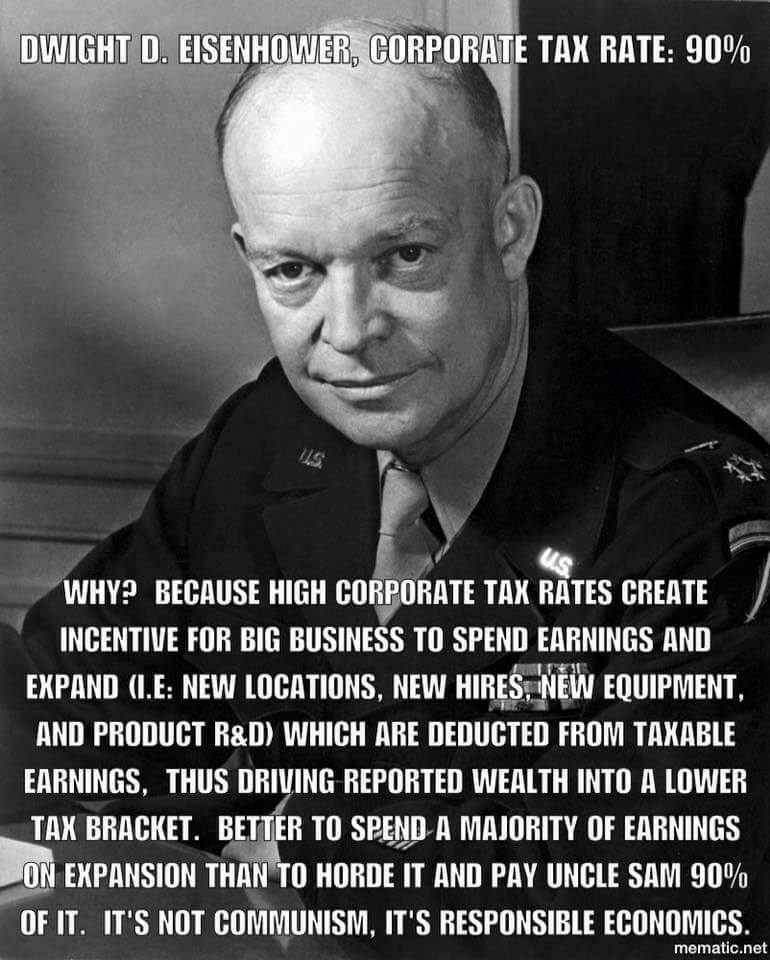