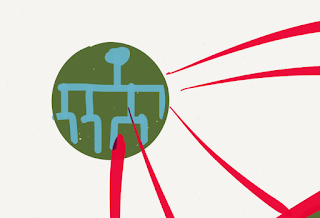 1. Why is work virtuous?

I know many people who think it is. But at the same time, accumulating wealth and assets, giving the ability to generate passive income and not work, is also seen as virtuous by the same people!

Unfortunately, these hidden beliefs and biases are extremely common in economic thinking.

2. Why don’t we ever think about the opportunity cost of this spending?
It’s one of the privileges of living in a rich country to spend so much on the military will little public debate. Australia’s military budget this year is $32 billion. Over the next decade we will spend around half a trillion on military, much of it wastefully on expensive foreign-made hardware of questionable merit.

If we cut military spending in half over the next decade, spending only a quarter of a trillion dollars, rather than a half a trillion we could do these four things with our spare quarter trill:

1. Replace all electricity generation with renewables - $40 billion (16% of savings)
The basic calculation here is that large scale solar costs about $100MWh at the moment, and the country uses 220 million MWh a year. Multiply these magic numbers together. Boom.

2. Fund wildlife conservation in all of Africa for the decade - $25 billion (10% of savings)
Total cost estimates are around $USD 1.9 billion a year to fund proper wildlife and national parks management in southern and eastern Africa. The continent has had a massive increase in poaching recently, and a breakdown in some of the governance structures that formerly were somewhat effective. Obviously flashing that kind of cash needs careful consideration, but if we can coordinate half a trillion of military spending, we could give it a shot.

3. Build a world’s-best fibre optical network - $60 billion (24% of savings)
This would cover all the capital costs, with users paying just for ongoing operational costs.

3. Does the market really allocate many resources in a "market" economy?
Unlearning Economics asked it a few weeks back, noting a recollection of a study suggesting that markets only allocate 20% of resources.


A few years back I would have thought that estimate was reasonable. Now, I think it’s closer to zero.

In terms of land (or more precisely locations), we have the oceans, Antarctica, all public land in every country. Then on private land we have resources allocated without markets. I don’t charge my kids for their bedrooms. But there is a market for renting rooms. I just choose not to use markets for this. So kids bedrooms are resources that should be on the denominator.

When you think about it, the denominator gets insanely massive very quickly. Take the labour market for instance.

Each person has 24hrs a day in which they choose what to do with their time. Lawyers charge their time in 6 minute increments, demonstrating that, in principle, we could each trade our labour in 6 minute blocks 24hrs a day from birth.

But we don’t. At most we trade 20% of our time each working year in markets, and about 60% of a lifetime working, so that’s 12% of labour time in the market for a worker who works a full career.

Many people don’t work at all, so we can tweak that lower, and if we look globally, even less formal labour market participation exists, so perhaps we can halve that to 6% of potential labour market resources traded in markets.

But it is surely worse than that if, unlike lawyers, most labour time itself is allocated on the whim of the labourer because they are paid only each week, month, or year, for an agreed outcome. Thus, the allocation of time each day, even for your typical full time employee, is not the outcome of market forces. It is instead allocated much more cheaply and efficiently though other hierarchal and bureaucratic mechanisms with a firm.

So in terms of the labour market, we must surely be down to some fraction of a percent of resource allocation done by markets.

Overall, the allocation of resources done my markets as we would strictly define them in economics, must round to zero.

* The image at the top of the post is from here. It is a reference to Herbert Simon's paper Organizations and Markets which asks what a "market" economy would look like to aliens.
No comments: Links to this post
Email ThisBlogThis!Share to TwitterShare to FacebookShare to Pinterest

A draft of the new SEQ regional plan, a document that the State government uses to direct the development plans of local councils, is out this week.

But I noticed something a little strange. It is this mysterious red shading with the word Undullah on it. From Map 24 (find it here). The red means “Draft Urban Footprint”. So no longer are uses on that land limited to rural or agricultural activities. Bring forth the bulldozers, there’s a residential subdivision to be made! 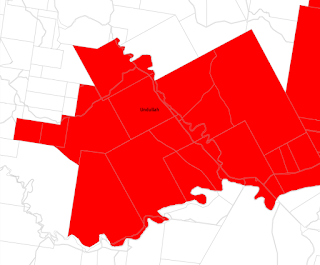 What an unusual shape though. I wonder how that decision was made? 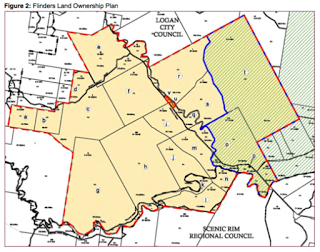 Maybe I’m jumping to conclusions. Maybe there’s a legitimate reason to draw a new planning boundary around this one landowner's land, giving them a multi-million dollar windfall gain from this planning decision. My guess of the value this planning decision to this landowner is somewhere in the order of $80-150million. Give or take.


I’m sure if we had an investigative body look into this, there would be no evidence at all of misconduct or improper use of powers by anyone involved.

Or maybe just read the whole back story here and make up your own mind.
1 comment: Links to this post
Email ThisBlogThis!Share to TwitterShare to FacebookShare to Pinterest

The privatisation agenda knows no limits.

NSW has passed legislation to allow the sale of their land titles office. This is foolish. The land titles office serves as the record of property rights across the country. Its database has a government guaranteed final say on who owns what land and property in the state (under a Torrens Title system). Every sale is recorded there, and every mortgage or lien against any property is recorded there. The database forms the foundation for administering state land taxes and local rates.

How does the government thinks it can regulate a private owner of the titles office to ensure better public outcomes than when it is actually the owner and manager of the land titles office? What magic are they expecting to find? This is a pure gift to the private sector, and I would not be surprised to find whoever wins the bid for the sale will be repaying politicians for the next decades with cushy, high-paid jobs.

My view is that the land titles database should be freely available to the public. Currently access is sold on a lot-by-lot basis, or in bulk through data-resellers such as CoreLogic (a likely bidder in the sale). It is expensive, and charging for access conflicts with the promoted views of both sides of politics about government transparency and accountability. Knowing who owns what property should be available to everyone, not just cashed-up interested parties. Like many other public record systems, it can be funded by those who benefit from its existence, in this case, property owners.

My questions about the planned sale are these.

I highly doubt that there are sensible answers to any of these questions. The NSW government is now firmly part of the corporate-mafia.