Background
More than anyone, Steve Keen has raised awareness of the role of banking and money creation in driving economic cycles. Not only this, he has published just about every presentation and paper of his freely online, and participated in a variety of forums online and in the media.

Not only is he out there putting forward new approaches and ideas, he is doing so in a way that allows every man and his dog to nit pick at his work. That takes guts.

Because of the public nature of his work for the past decade, his analysis and communication of these big ideas has evolved to become extremely powerful and hard to ignore. Just about everyone I talk to in the economics crowd these days has been influenced by Keen’s work in some way. For me personally, the latest lesson from Keen as been his reconciliation of accounting identities with the dynamic effect of additional demand from credit creation - a change in understanding that I think could offer a clear path forward for dynamic monetary methods.


The issue
In the spirit of this public debate I want to take issue with one of Keen’s recent ideas; adding change in credit (debt) to GDP. But I want to do so constructively so that as a profession we can incrementally improve our economic analysis and understanding of macroeconomic phenomena.


In this video, from 16mins onwards, Keen explains the idea and attaches a particular interpretation to the summation of GDP and the flow of new credit (change in the credit balance), as “aggregate expenditure” (AE). The slide below summarises.

Where this measure of AE differs from the standard view is that it can include expenditure on transfers, such as assets sales, rather than just newly produced goods. It therefore includes expenditure on real estate (not just new housing construction), and leveraged expenditure in equities markets. We could probably better call it “aggregate transactional expenditure”.

What he misses, however, is that there is no one-to-one relationship between credit creation and its use in asset markets. Quite a bit of new credit is used to fund investment in new buildings, and other “capital” goods, the value of which is already included in GDP calculation.

Let’s take an example. I build a new home. The land costs $100,000, and the building I have designed will cost $100,000 to build on that land. I buy the land using my saved wages, and borrow $100,000 to construct the building. In this case, this $100,000 of new credit created by my bank for me to pay my builder is counted as new capital (or what the Australian statistical agency calls “gross fixed capital formation”). It is in nominal GDP. Adding the $100,000 in new credit to the $100,000 of new housing in GDP makes no sense. Similar situations abound in large investment projects, where bank funding for pipelines, rail lines, energy facilities and so forth, is already part of measured GDP.

Even in cases where new credit can appear to be pure speculation on asset markets, such as the purchase of an existing home, that credit can then be used to purchase consumer goods, which are counted in GDP. For example, the seller of the home I buy with my new mortgage can turn around and buy a car, a boat, or go on a holiday, with the new money created when I took out a loan to buy their house. The net effect is as if they had used new credit (money) to directly buy those consumer goods.

If I haven’t been clear, I don’t think the simplification of calling GDP the expenditure in a year financed by existing money is appropriate. And I am not sure what it adds to Keen's analysis, since credit dynamics alone make similar predictions of the macroeconomic cycle without adding them to GDP. If it is merely a case of "here's a metric that correlates well with the historical data", I have no issue. Whatever works is fine. But if we attach meaning to it above and beyond this, than we need to understand what the metrics really are.

In terms of my economic domains approach to economic analysis, we can see that despite both being measured in $/period (which is simply the common measure used to aggregate different types of goods), GDP is a measure of real production, while new credit is a measure of the change in the balances of our monetary accounting system. This means that without knowing all the monetary balances and transactions in the whole economy, we can’t precisely know the link between new credit and the production of real goods and services. There are also price effects to consider, both in the real goods markets, as well as asset markets, which changes incentives for real capital investment. The question mark in the image below shows where this type of monetary analysis must focus - understanding the mechanisms by which new money creation affects GDP. 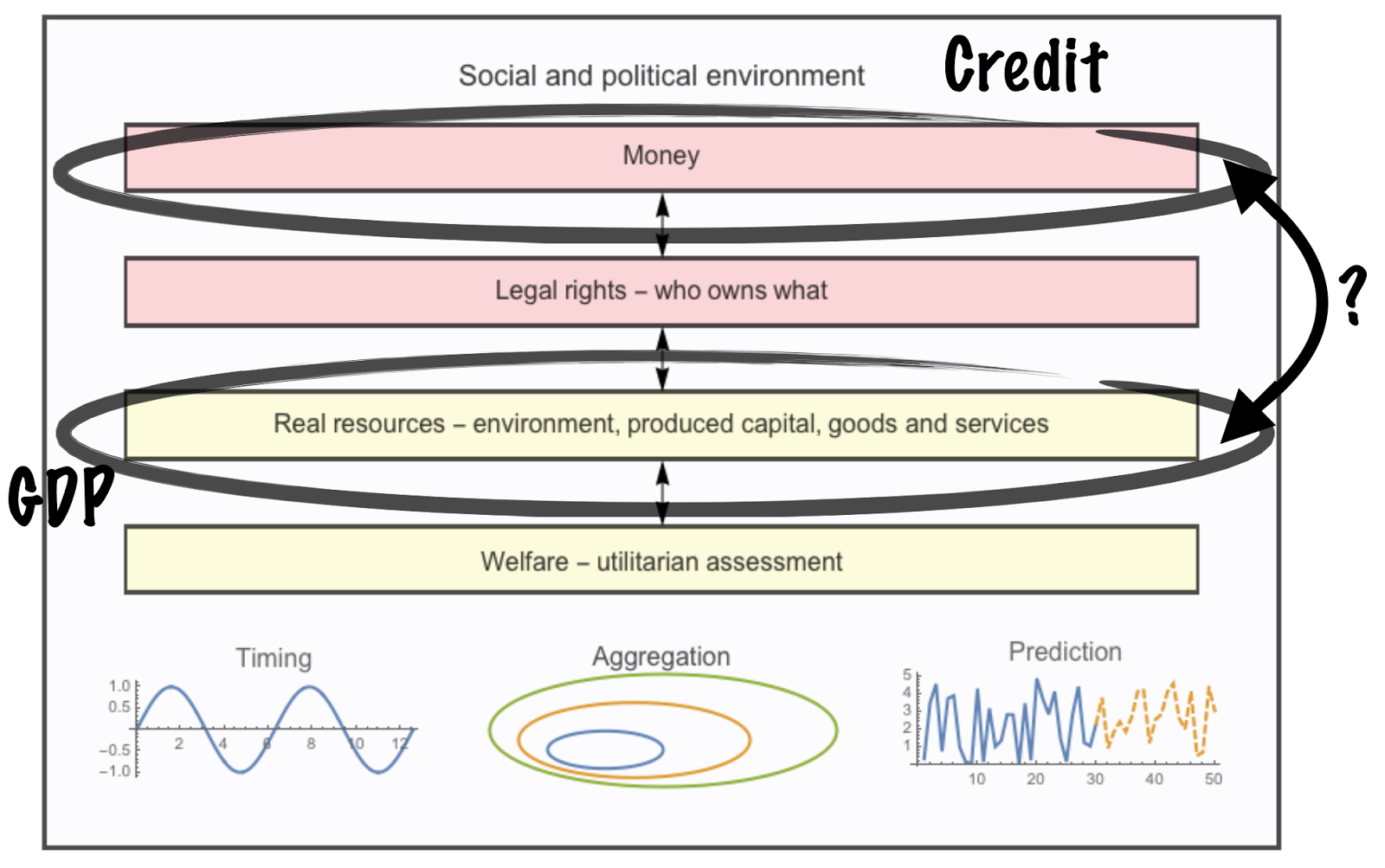 In terms of the simple examples I used earlier, the diagram below shows how some share of new credit is already counted in GDP when it funds new capital investment. But even here, it is not clear what the relationship between new credit and GDP should be like. 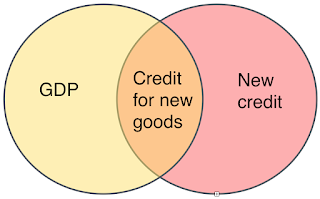 Credit and GDP differently
Perhaps it is more useful to look at the effectiveness of new credit in creating goods and services instead of asset price inflation (or inflation generally). Call it “growth efficiency of credit”. And why not? That’s what the World Bank calls it.

There are two extremes I have in mind in this analysis.

First, if all new credit is directed to new capital investments, we would expect a very close match between credit creation and increases in nominal GDP. Second, if all credit creation is to fund asset purchases, we might expect a much lower relationship between new credit and GDP growth.

This idea fits nicely with the story that we should use the banking system to support new capital investment instead of funding asset purchases, which simply leads to asset price growth and speculative cycles. In this story it matters what new credit (money) is used for, not just the levels of new credit.

To examine the idea of credit efficiency, I take the change in nominal GDP (increase in real market goods and services in current dollar terms) over a period, and the change in total credit (i.e. the new credit) to see how effectively the new credit is being directed towards real production instead of asset markets. The result is in the chart below. 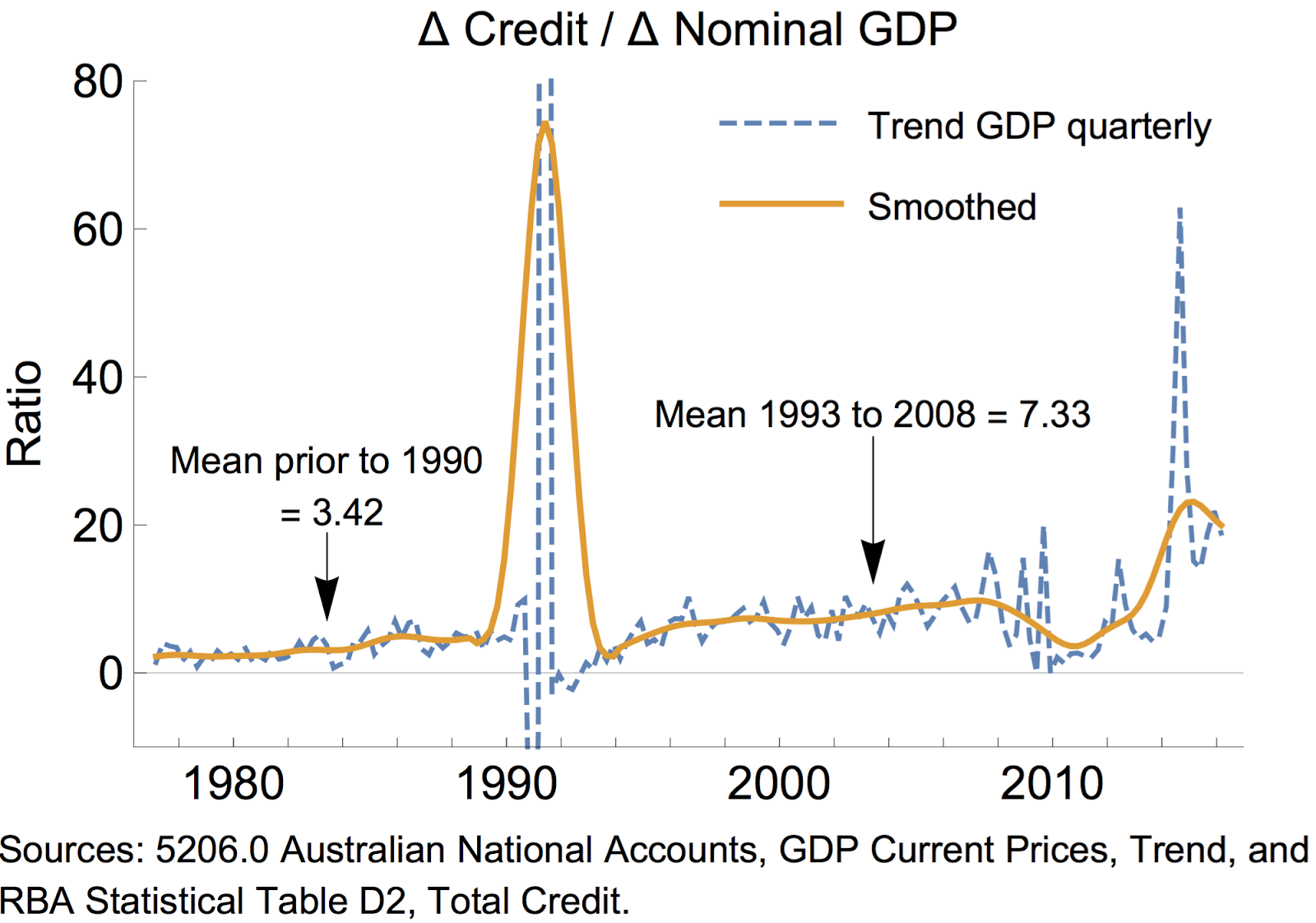 What a surprise! Nothing at all like I expected. I had in mind a very cyclical, hard-to-decipher, pattern.

I suspect that these stable period levels in some way reflect the prudential controls on lending that prevailed at each time period, such as loan-to-value ratio limits, savings requirements, and other such things in the case of mortgage lending. But also, I suspect there is a feedback loop at play - from more credit creation, leading to higher home prices, which leads to lower interest rates, supporting more credit creation and higher prices, and on it goes. It is these types of feedbacks that Keen's dynamic methods can capture.

But what of the unstable periods?

There was one in 1990, which we know preceded a recession in the early 1990s. And there is a lull in credit while GDP growth remained strong in 2009-10, perhaps due to government stimulus. But now we appear to be in a period of very inefficient credit use, where a new dollar of credit has bought just $0.05 of GDP over the past three years. I suspect this has a lot to do with the winding down of mining investment (I’m unsure of the degree of domestic bank lending for these expansions), at the same time as a massive ramp up in investor mortgages in Sydney and Melbourne, which do not feed directly into consumption and investment.

Overall we could say that the patterns seen here supports Minky's idea that "stability is destabilising".

So what is the meaning of this?

It is a little worrying to see a “pre-recession” pattern forming at the moment. But without looking more widely at the predictive power of such patterns, I'm hesitant to make strong predictions, though I don't expect any surprise economic boom in the coming few years.

In terms of economic theory, at the very least I now have a story about how the money domain leads to changes in the real resources (GDP) domain through directing new funds towards new capital investment, or towards asset purchases. This is one mechanism that provides a relationship between these domains. I suspect there is a second important mechanism, and this is the effect of new credit on asset values, and the subsequent effect on brining forward or delaying investment for asset owners. In terms of my economic domains approach, this mechanisms relies on a monetary effect on the value of property rights (assets), and an subsequent effect on new capital investment because of these value changes. I have attempt to look at the second part of this mechanism before.

There is also a literature in this area, which also looks at the “credit-to-GDP gap” (see here, here and here for examples). I see plenty of scope to reconcile Keen’s ideas (focusing on growth rather than levels) with the work of others. There is even an international database on total credit available to researchers following a lot of interest in this idea from the Bank of International Settlements.

So what
I hope that by highlighting problematic conceptual issue with adding GPD to change in credit, this post improves future debates about the link between the monetary system and economic activity. My impression is that we currently have a group of economists looking at monetary models of the economy, and a bunch of them looking at models of only real goods and services, and they are talking past each other because the are using terms to mean different things. Using my economic domains approach makes this conflict in terminology obvious, and I hope points towards ways to reconcile approaches in a meaningful way.
Email ThisBlogThis!Share to TwitterShare to FacebookShare to Pinterest