The workhorse model of urban economics is the Alonso-Muth-Mills (AMM) model of the mono-centric city (the modern treatment is attributable to Jan Bruckner). This model is basically the representative agent optimal-control model of neoclassical economics. It is modified with additional functions that account for the cost of commuting to a city centre from different distances and allows capital, K, to be optimally geographically dispersed as well.

The only problem is this. When you convert the model to English you realise it has little basis in reality. The only real pattern that is consistent with the model is that higher buildings are near the city centre. But I could come up with a million other models that are consistent with that pattern.

One of the main flaws in the AMM model is that there is no possibility for development of sites within the city into new buildings. Every site is already used at its optimal level. There are no vacant sites or sites with old buildings ready for knock-down and reuse. There is no development industry. There are no landowners.

Also because of the comparative-static nature of how the model is used, every time there is a marginal change in any of the parameters of the model — a new person moves to the city, the rental price of the second best land use increases, or the efficiency of construction methods change — the whole city is wiped clean of homes and buildings. The single social planner who controls everything in the city then dictates that the whole city will be rebuilt with a new optimal allocation of housing and commercial buildings under new conditions, and this whole new stock of buildings rebuilt in an instant to that new specification.

Don’t believe me? Here are comments from eminent urban economist David Pines from back 1987 making the same point.


The static approach in the Alonso-Mills-Muth model is useless in explaining many stylized facts regarding the urban structure and its evolution through time. In the static analysis... land is continuously utilized within the city boundaries and the city boundaries are continuously extended with income and population size.
...
The reason for the failure of the static model in explaining these ‘irregularities’ is that the housing stock is assumed to be perfectly malleable, which, of course, is highly unrealistic.

Perfectly malleable. That’s the crux here. Behinds this term hides the complete nonsense I just described about the constant rebuilding of the entire city.

This is a massive problem for anyone wishing to apply economics to urban planning. Because in the AMM model any constraint on land use — be it a natural feature such as a lake, river, or mountain, or a regulatory constraint in the form of height limits, floor area restrictions (FAR), or greenbelts — increases prices by forcing the malleable capital stock of homes and buildings to spread further from the city centre.

But this simply cannot be true outside of the model. There are so many contradictions between the model and reality that its conclusions cannot be taken seriously. For example, the existence of a development industry that takes sites that are vacant or in low-value uses and invests in new buildings isn’t captured in the model. There is no such mechanism because there is no vacant or under-utilised land. Every piece of space already has a building at the perfect economically-optimal height for that location.

I created the below image to show the common real-life elements of real cities that can’t exist in the standard AMM model. Let me explain. 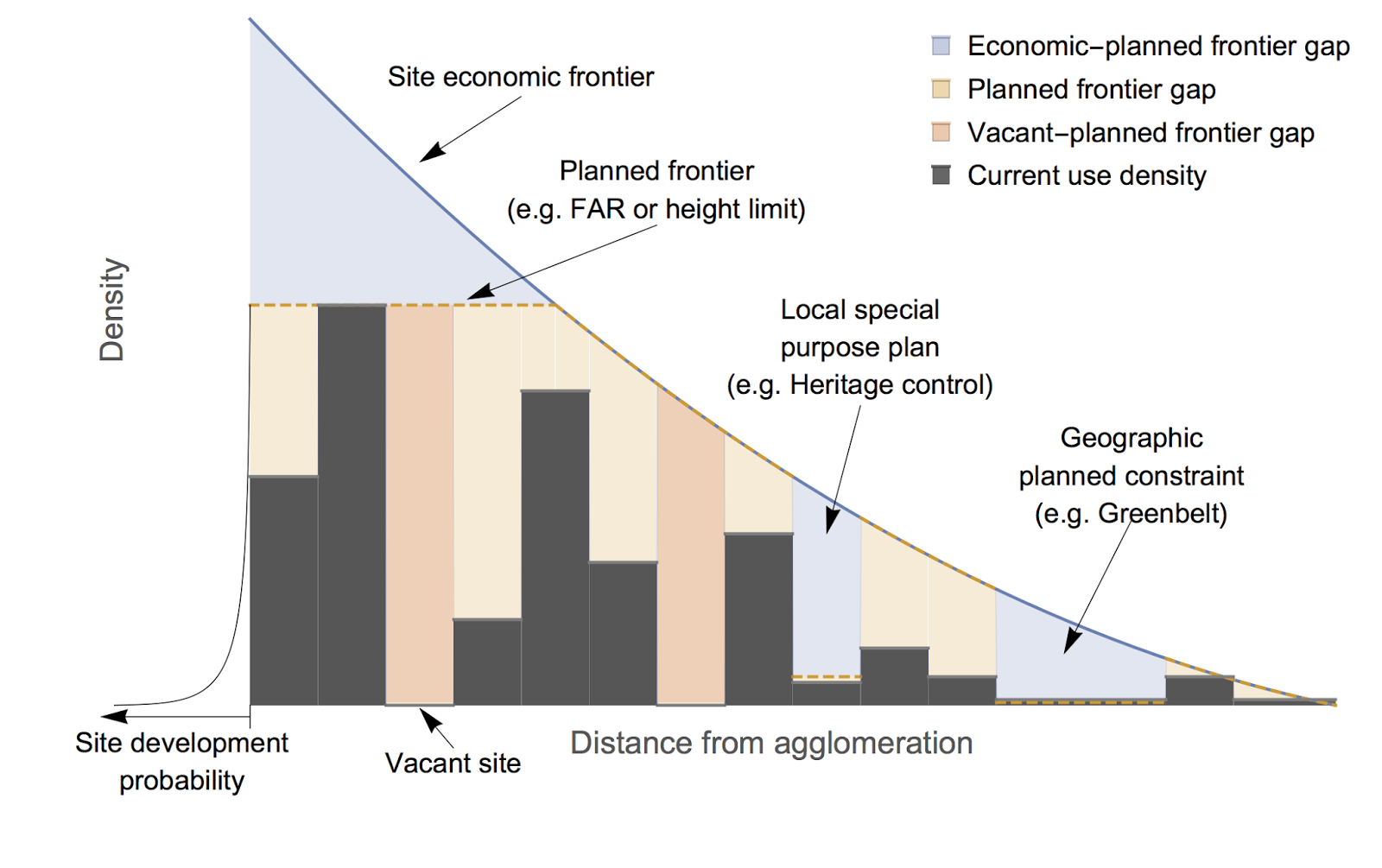 The horizontal axis represents the distance from the centre of the town. Imagine taking a slice of the city along the roadside as you drive outwards from the city centre. You will see the density of buildings fall, which are represented here in dark grey. What you see in the real world is just the dark grey.

The world of the AMM model is represented by the blue line, showing the optimal development density at each point along the road at a given time. In the city centre, where rents are highest, it is optimal to build higher buildings. Higher rents justify the investment in taller buildings. But then as you go further from the city centre, the rents at each location can only justify a smaller building on each site. I call this the “site economic frontier” because for each individual site at a given point in time, it is the economic limit of development.

In the AMM model, the whole city is full to the blue line. Always and everywhere. So you can begin to see the problem. There are substantial gaps between this model outcome and the reality of the grey buildings.

Moving along, the dashed orange line represents town planning constraints. Near the city centre I have shown how a height limit will create a gap between the site economic frontier and the “planned frontier”, or planning limit. I have also shown how such gaps are created by site-specific controls such as heritage protection (meaning you can’t demolish the building and then build to the site’s economic frontier). And I have shown how city boundaries like greenbelts or urban footprints create a similar gap.

The blue shading is therefore the economic-planned frontier gap. In the AMM model this is a problem, because before introducing such a gap the city is full to the brim, with buildings always built in every location to the economic frontier, so it results in a net loss of dwellings and buildings, even after accounting for feedback into higher prices and a higher economic frontier in other areas.

Yet in the real-world view, introducing such a gap changes nothing. Buildings are not demolished and rebuilt in different locations. Landowners in certain locations are simply limited by a “regulatory geography” rather than the “economic geography”, neither of which the city as a whole is anywhere near.

The existence of the light orange shading — the gap between the currently built city and the planned frontier — also cannot exist in the AMM model. There are no development opportunities. Even worse, there are no vacant land sites. This is an even bigger problem for the model.

I highlight this particular point by shading the gap between vacant sites and the planned frontier in darker orange because in the real world these are the most likely sites to be next developed. On the left of the diagram I also have a little curve that is supposed to show the probability of a site being developed as a function of its currently developed density or height. The smaller the current development, the more likely that site will be developed next, as there are lower costs in doing so in terms of demolition.

Overall then, we have a diagram that shows the major problems for the standard AMM model of urban economics. There can be no development industry in the AMM model because there is no planned-frontier gap. But even worse, the fact that reality doesn’t fit well to the model means that there must be some other mechanism determining the rate of investment in new housing and development. Something entirely ignored in this model. And even worse, entirely ignored in the current popular textbooks on urban economics.

I have been through this before. Vacant land is a perpetual real option to invest. The optimal timing of when to invest in a building — to exercise the development option — is when you expect that doing so maximises its value (read up on the Bellman equation if it takes your fancy). Otherwise, you wait. Because while today it might be optimal to build a five-storey building, in a couple of years it might be optimal to build a 12-storey building, providing even greater incomes. And you can’t do both.

This turns the standard model on its head. It means that because planning controls, such as height limits, take away this future option to build higher buildings, the value of waiting to build is lower, and the typical landowner will bring forward their investment, increasing the rate of new dwelling supply.

To me, the fact that the standard AMM model doesn't fit the data, and because we know land is best characterised as a real option, it must surely be time to throw out this model and update the textbooks.

Update: Read more about the option to delay development here.
Email ThisBlogThis!Share to TwitterShare to FacebookShare to Pinterest