And so the debate rages. Economics needs to change. Always does.

The challenge of reforming economics cannot by overstated. Modern mainstream economics has remained dominant in our universities and governments despite overwhelming evidence against most of its core principles, and despite decades of attempted revolutions. The concept of a static equilibrium and the ‘representative agent’ method of aggregation are just two notions that have been repeatedly shown to be internally inconsistent; not just by outsiders, but by many of the leaders in the mainstream. Yet they continue to dominate the discipline.

The call for pluralism is an admirable end goal, upon which most reformers agree. But my view is that previous attempts at reforming economics have failed because they avoided, or inadequately understood, the two main barriers to change. While they may at first seem insurmountable, without leveraging change at these points the mainstream will stay locked-in as the dominant approach to economic analysis.

The first main barrier is social. Economics as a discipline typically rewards tribalism over reconciliation. If you’ve been following economics blogs in recent years you will have a pretty clear understanding of this. But the same dynamic happens in all of academia. Journals are often aligned with particular views on what are acceptable methods and concepts and act as the gatekeepers to the tribe, requiring all comers to offer sacrifices to tribal elders. Moreover, the mainstream represents over 80% of the discipline, so any change promoted by minority groups will be frowned on. This is the social reality.

In essence, the social challenge is to bring the tribes together in a way that makes them all feel like insiders in a new larger group. This means not starting fights with powerful tribes, especially not the current mainstream. It means highlighting any common ground where tribes agree and giving credit to how they contribute to an enhanced view of economics. 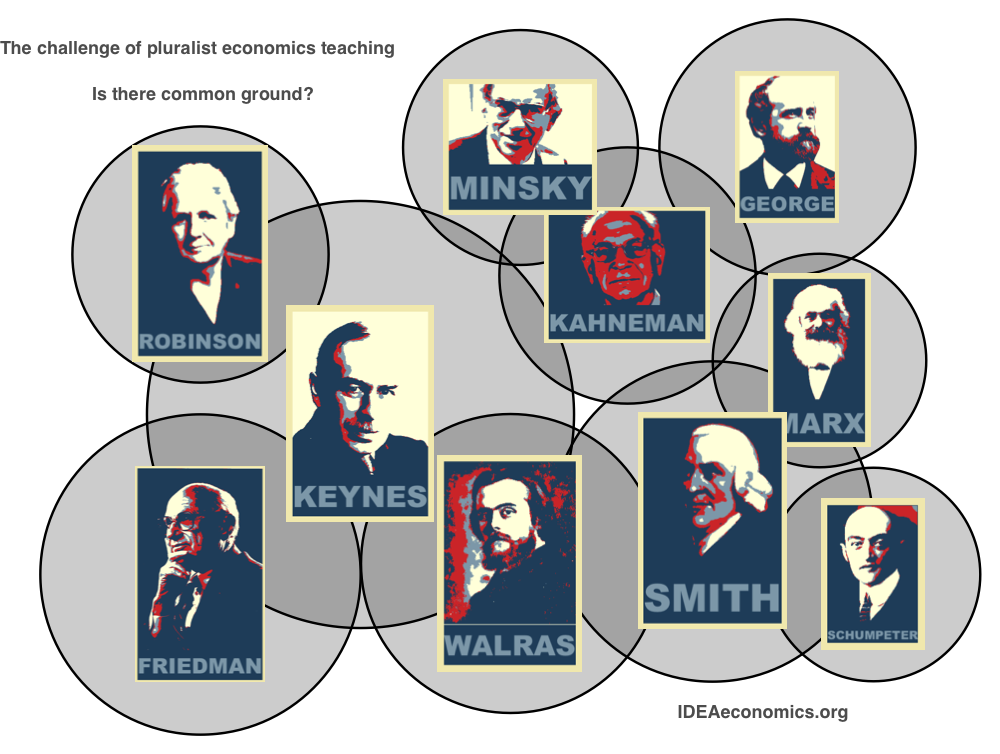 I will talk more about social barriers to change in economics at length in the future. For now though, this is enough context to discuss the second main barrier, which is a technical one.

The technical problem is - how do you teach a pluralist program when there is no recognised structure for presenting content from many schools of thought, which can often be contradictory, and when very few academics are themselves sufficiently trained to to so?

Teaching a pluralist curriculum shouldn’t be about presenting the economics discipline as one of feuding tribes. I share Simon Wren-Lewis's fear that a pluralist curriculum could become a one-stop shop for students, who get to browse the tribes before joining the one that most aligns with their existing political ideology.

Instead, I sincerely hope that we can train a generation of economists to be aware of the legacy of each school of thought, but acknowledge the common ground between them.

Approaching this problem needs a systematic solution. For example, we need to think about how to structure teaching around topics and concepts that allow students to study problems and evaluate potential approaches, and their evidence. We need an alternative textbook, or set of them, that can satisfyingly demonstrate the approach being called for, and ultimately offer a replacement foundation upon which to build a pluralist curriculum.

Presently, even the best mainstream textbooks merely tack on a few comments on alternative approaches. For example, the currently popular experimental or behavioural economics schools, despite being widely being regarded as a revolution in economic thinking and economic science, are given very little credence in the most popular textbooks. After pouring through the text of 25 popular undergraduate microeconomic textbooks, Lombardini-Riipinien and Autio find that


… ten of the 25 textbooks examined make no reference at all to behavioral economics; six dedicate less than 1% of total pages to it, six between 1% and 2.6%, and three between 6% and 11%. When behavioral economics is discussed, the focus tends to be on bounded rationality rather than on bounded self-interest or bounded willpower.

Joan Robinson tried to comprehensively rewrite the core introductory economics textbook with John Eatwell in 1973. While the book does a superb job of putting economic analysis in a philosophical and historical context, it offers no coherent backbone upon which to build an understanding of economics. For example, after reading the book I learnt very little to aid me in answering practical day-to-day questions about the economy. Where does money come from? How do we measure unemployment? How could we assess alternative options for addressing negative externalities? Is the very concept of eternality useful, since it implies the existence of a no-externality world?

What is needed is a way to structure the exploration of economic analysis by arranging around economic problems around some core domains. Approaches from various schools of thought can be brought into the analysis where appropriate, with the common ground and links between them highlighted.

Unless the community of economic reformers can make the effort to reconstruct the way economic is taught, and make the tough decisions about how to structure new core texts, including what to leave in and what to leave out, then change will remain elusive. We can’t call for change in the challenging tribal social environment of economics without offering an attractive alternative - one that embraces the best from each of the schools of thought and finds common ground without creating a new set of outsiders.

Originally published at IDEA Economics
Email ThisBlogThis!Share to TwitterShare to FacebookShare to Pinterest