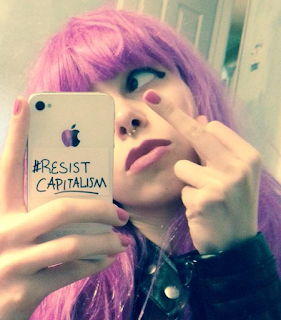 My twitter feed has been aroused into fierce anti-capitalist protest. Welcome to 2016 I guess.

This situation gives me chance to flesh out some important points that cannot be made effectively on Twitter.

Resisting power
My view is that the hashtag has arisen out of a resistance not to the capitalist idea of private property ownership in particular, but the exercise of political power under the veil of capitalist ideology (much like the Occupy movement). Bailouts of banks not for people. Money for weapons and war but not public services. Increasing legal protections for the rent-seeking elites, such as extending patent and copyright protections. Removal of the power for workers to organise in their interests. A hollowing out of welfare based on ideology, rather than an extension of it based on our accumulating wealth abel to shared.

But these types of power conflicts arise in all systems eventually. So while the protest is brought together by a common enemy of the current system, many involved have vastly different ideas about what alternative system would better deliver their desired outcomes.

Sclerosis
Mancur Olson spent a career making the point that stable systems begin to break down over time due to infighting over economic rents. That is what we are seeing now, to an elevated extent, in many of the major Western economies. What sort of system do we have that allows the rich to become so insanely wealthy while leaving others poor, homeless, and struggling for find a productive social niche for themselves? The answer is a system suffering from heated internal infighting. My view is that this occurs after a period of stability and a lack of external threats to the existence of the group (i.e. country). You see after a war that it suddenly become easy to distribute wealth to returned soldiers and their families, providing cash allowances, public healthcare and housing. Yet when the war is amongst internal interests, these desirable institutions suffer.

An ecosystem of institutions
What most people want is a set of institutions that allows for private investment and risk taking while ensuring the negative external effects of these activities are limited. They want stable basic services provided in a manner that ensures equitable access, rather than access based on wealth and income. These basic services will obviously expand as nations become wealthier and luxuries become necessities for functioning in the modern world.

Another thing is that some kind of welfare state is essential for maintaining the dynamism of the capitalist part of the economy. Without this cushion against failure, who would risk their life savings on inventing and investing in new products and innovations? Essentially we all want a mixed economy, a level of safety net that reflects the wealth of the country, and basic services provided in an equitable manner. It sounds a lot like the basic economics. Go #MixedEconomy! The main argument is around which institutions can deliver this effectively, given the realities of politics.

The role of economics

Strangely enough, the core of mainstream economic theory assumes that these desirable systems of institutions have already been met. Even more strongly, models that deal with a “representative agent” assume that a government agency is constantly redistributing wealth in the background so that all people are equally wealthy. This then allows the nice results in terms of efficiency to not have implications on equality.

Let me quote from the world’s most popular advanced microeconomics textbook.


The idea behind a social welfare function is that it accurately expresses society’s judgments of how individual utilities have to be compared to produce an ordering of possible social outcomes.
…
Let us now hypothesise that there is a process, a benevolent central authority perhaps, that, for any given prices p, and aggregate wealth level w, redistributes wealth in order to maximise social welfare. (MWG p71)

So why aren’t all economists raging with the Occupy protestors? Or arguing for a massive redistribution of wealth as an immediate first step to social improvement? Has the discipline sold out to the highest bidder? My view is that economists need to stand up and point the finger at sellouts as a first step in cleaning out this unusually influential discipline, and hopefully in the cleanup process ensure that economic advice arriving at the political level does not suffer from conflicts of interest.

Such protests boil down to the inability for the vast majority of people to get a fair say in democratic processes. Obviously bailing out private banks is not capitalism. Severely unequal trade agreements are not capitalism. The Wests selective involvement in destroying “democratising” countries with oil, while ignoring atrocities elsewhere in the world. The inability to invest in public goods in the face of ideological push back by vested interests. They're not capitalism. Occupy Wall Street had similar motives against entrenched interests.

A mixed economy, with a fair share of “capitalist” private ownership of property is a great thing. But when the political power of a select few capitalists overwhelms the system to the extent that the other non-capitalist parts of the mixed economic suffer, there are obvious and genuinely satisfying moral grounds for protest.

Minor tweaks
So what simple changes could #ResistCapitalism argue for? Here are some
Temporary fixes
Any system will start being gamed as soon as it’s created. We need the general public to continue to be politically active and organised, protesting about particular single policy ideas that could be implemented should the movement gain momentum. Be clear that replacing capitalism does not automatically mean replacing the tendency towards plutocracy or oligarchy.
Email ThisBlogThis!Share to TwitterShare to FacebookShare to Pinterest