One feature of economics is its uncanny resemblance to religion. When a complex question arises outside of your narrow field of expertise, like a priest during confession, resort to the scriptures.

This is especially true for economists of a particular political persuasion, who are immune any empirical evidence that conflicts with their scriptures.

And so it is with economist polls. The University of Chicago Booth School of Business started their “experts panel”, which is the place to go if you want to see a bunch of people say that introductory economics textbooks are almost always right.

The image below shows an example. See? They all find the idea of Nash equilibrium a really powerful lens through which to view the world. I don’t. But anyway. 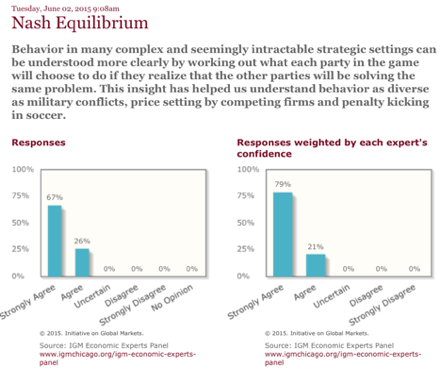 This craze of surveying a panel of economic experts has now reached Australia, with Monash University and the Economics Society of Australia posing tricky questions to our own high priests.

It’s so lovely that we now get our own beautiful ritual of watching the high priests periodically recite the economic scriptures.

Take the latest example. The question asks about the economic consequences of the government changing the rules around penalty rates (wage premiums) that are mandated for Sunday work (along with late night work and a range of other situations).

As you can see, 80% of the panellists agree that reducing the minimum wages for Sundays in a variety of industries will be “good” for employment and production. 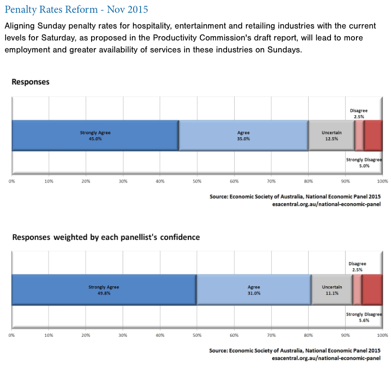 From someone who agrees:


For many people, weekends are not what they used to be, and are just another part of the week. Given there would be a willing supply of labour, and a demand for it from those entities that currently close due to higher weekend costs, there should be a market outcome that suits many.

Sounds a lot like reciting the scriptures to me, without much consideration of the context. Basic questions like - Why are there weekends? Why do the wage rules exist in the first place? What non-market outcomes were desired?

But what about the minority? The 6.5% who didn’t recite the scriptures?


I think it will have almost no effect on overall employment, merely shifting activity from Saturday to Sunday. Its main effect will be to reduce the rent-sharing of workers and normalize Sunday as a regular working day, both to the detriment of workers but to the benefit of large employers. It is hence mainly a distributional issue.


The fact that there is increasing demand for services on Sunday does not imply that workers should be paid less to provide those services. In fact, one would argue that workers should be paid even more.
…
if longer opening hours on Sundays imply that consumers spend more time and money at cafes and restaurants on Sundays, then the volume of business of these shops in weekdays might decline. If this happens, than the net effect on employment becomes even more difficult to predict.

Seems reasonable to me. After all, people generally have the same annual incomes and expenditure regardless of which days of the week they do the spending. And I doubt that Sunday trading is holding back investment in new equipment that would add to the nation's productive capacity. In fact, it may hinder it.

You will notice that each of the economists on the panel has made a career out of showing why naive “econ101 assumptions” don’t apply to their field of expertise. Yet when asked about an issue outside their field, they resort to the scriptures, as if theirs is the only deviation from the textbook case. This is lazy and not at all scientific.

In general, the best way to interpret these surveys is a chance for economists to pledge their allegiance to the econ-tribe, making the whole effort a clear demonstration of economics as religion.
Email ThisBlogThis!Share to TwitterShare to FacebookShare to Pinterest