Explaining everything explains nothing: Economics

The below comic probably hits a little close to home for most economists. Poking fun of economists’ naive attachment to their particular brand of rationality, and it’s immense body of hidden assumptions, usually gains responses that are merely signals of tribal loyalties and ignore the substance of the critique.

My colleague Vera te Velde made an improvement on the comic which is also included below, and my reading is that she wants to gain loyalty from the tribe more than defend rationality assumptions in economic models.

While it is certainly true that her improvement is consistent with core economic theories, it really highlights in my mind that these theories are essentially vacuous if they can explain anything and everything imaginable.

In response to the ability of other economists to fit everything within their model (meaning nothing can be excluded), simply because of creatively reversing out a set of preferences that explain the observed behaviour (or as Vera concludes De gustibus non eat disputandum), I wrote


There was simply no phenomena he could not explain with his beloved utility theory. But if the theory explains everything imaginable, then it predicts nothing. I resolved that the theory as it stands, in the revealed preference form, was not falsifiable, though he didn’t seem to understand why that would matter.

Sure, humans often make calculated decisions, but the more I learn about the nexus between individual behaviour and how we behave in groups, the more I see very little value in rational-individualist views of economic systems that see all behaviour arising from God-given personal tastes. Without acknowledging the necessity of group-coordination mechanisms intrinsic in our behaviour, we are missing the main story. 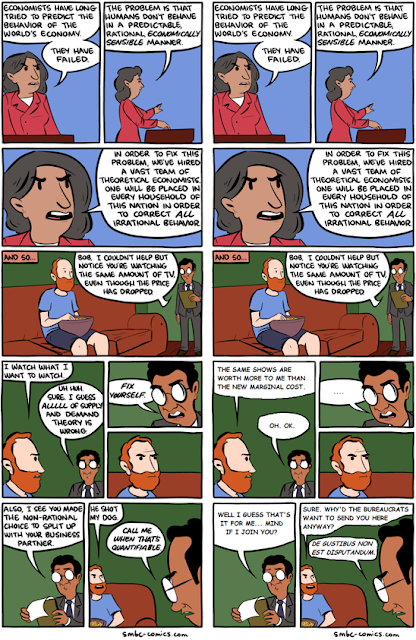