If you click the news link above you will see that my research on land rezoning decisions and the relationship networks of land owners has had a fair bit of coverage.


One thing I have learnt is that this type of quite technical research requires some effort to translate into bite-sized pieces for the broad media-consuming audience.

This post will be a reference point for the media and interested people that summarises the key findings and provides a couple of simple graphs and visuals that are not specifically included in the original research paper, but that can communicate the basic findings well.

I took a sample of landowners inside and outside rezoned areas in 6 locations in Queensland, where the statuary body, the Urban Land Development Authority (ULDA), took planning controls away from councils with the intent of increasing density, land values, and the speed of housing development. 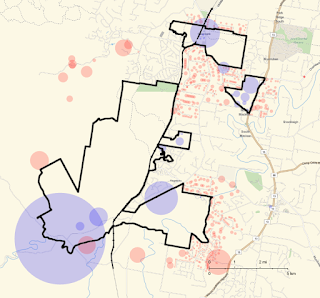 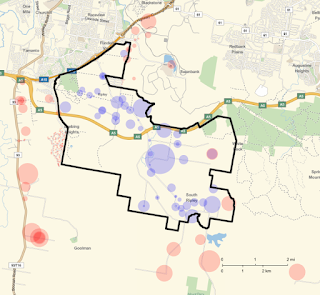 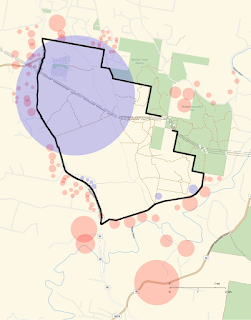 The logic of doing this is that these outside landowners could have been rezoned had the boundary of the areas been decided differently. From interviews with former public officials, and many others involved with planning decisions, it came to my attention that there is quite a bit of discretion about boundary decisions in zoning and that well-connected landowners often use their political clout to make sure the boundaries encompass their properties. The odd shapes of these areas are quite suggestive of this type of favouritism, as they have no apparent economic justification.

The sample is filtered to ensure I capture only undeveloped parcels that are at least as large as the minimum size rezoned parcel. There are 1,137 landowners owning 1,192 parcels in the sample.

To see whether the characteristics of landowners likely to reflect political influence were a key determinant of these boundary decisions I collected data from both inside and outside landowners on the following:
I also created a network of relationships that included the landowners using lobbyist-to-client connections, industry group connections, corporate connections, and

I then model the effect of these characteristic on rezoning success, finding that being connected in the network increased chances of rezoning by around 19%, and getting into the most favourable part of the network gained an additional 25% chances. Employing a lobbyist improves your chances 37%, even after controlling for all other factors. Political donations don’t show and significant prediction on land rezoning when controlling for these other factors.

Connected landowners owned 75% of the rezoned area, and only 12% of the land outside. 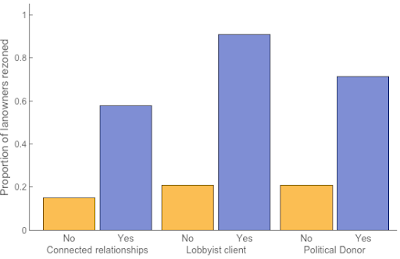 The size of rezoning value gains

Using 822 historical sales of development sites inside and outside the areas in the study I estimate the price deviation attributable to rezoning. Essentially the rezoning increase prices across all areas by 81% relative the the neighbouring sites outside the rezoned areas. The below graph shows the price deviation through time, and the big change that comes the year of rezoning. 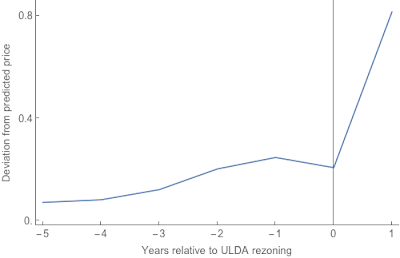 In all the value to rezoned land owners was $710million, of which connected landowners gained $410million. In terms of the marginal gains to becoming connected in our sample, this was $190million. While on a per hectare basis the mean gains are just $56,000, which isn't much, the sheer scale of the the gains to a narrow group of people represent a problematic political transfer from the unconnected to the connected. It also suggests that many billions in value are regularly transferred to connected landowners through routine rezoning decisions.

There are two main ways to stop this political favouritism - disrupt the favour exchange, and remove the honeypot.

Disrupting the favour exchange means requiring cooling-off periods for former politicians and bureaucrats, but also a policy of electing independent people to boards and decision-making positions. Why does the ULDA need to have its board stacked with local developers? Why not have a planning expert from Europe? There is a myth that local expertise is somehow required in the regulatory positions, but most of the time you don't get expertise, just loyalty to mates.

Greater transparency from all our public registers would also go a long way. Why aren't land titles a freely available database? Why isn't ASIC register of companies available for free? Why can trusts conceal who owns what so easily?

In terms of removing the honeypot, or reducing the value of discretionary political decisions, the obvious point here is to enact a process of selling additional development rights rather than giving them to selected landowners for free. This requires a pretty radical change in the way planning is viewed, but it makes perfect sense. Planning rules, including zoning, are part of the definition of property rights. You wouldn't give away a land area for free, so why give away land right of a different kind for free?

Alternatives to selling development rights are betterment taxes, and land taxes, both of which are effective administrative alternatives.

We can also think outside the box and look at development timing fees. If the rezoning is intended to increase density and increase housing supply, why not provide incentives to build sooner rather than delay? A per-dwelling fee that increases every year in the rezoned area would encourage developers to bring forward construction and sales.

Lastly, we can have local referenda on town planning changes to allow for representation of the interests of the politically unconnected.
Email ThisBlogThis!Share to TwitterShare to FacebookShare to Pinterest