Exponential growth is one of those things that confuses many people. Here's probably the best example getting traction in social media at the moment.

Notice that at this scale we know nothing apart from the general exponential shape of the curve, which is all that is communicated by representing the data in this way.

Similar exponential graphs have been used to support many ideas and predictions. Mostly these have to do with some kind of impending doom, or sometimes it is to do with an observation about the how unusual the period of recent history has been.

But the existence of an exponential trend tells us nothing about whether an imminent limit is about to be reached, or how a trend may progress into the future. It certainly doesn't tell us that recent rates of growth of a particular measure are unusual, because an exponential curve has the same rate of growth at all points.

To make my point I have a series of charts to show. Below I have plotted the exponential function 2^x/25 over different ranges of 1000 on the x-axis . Think of x as years AD to match this with the image in the tweet. 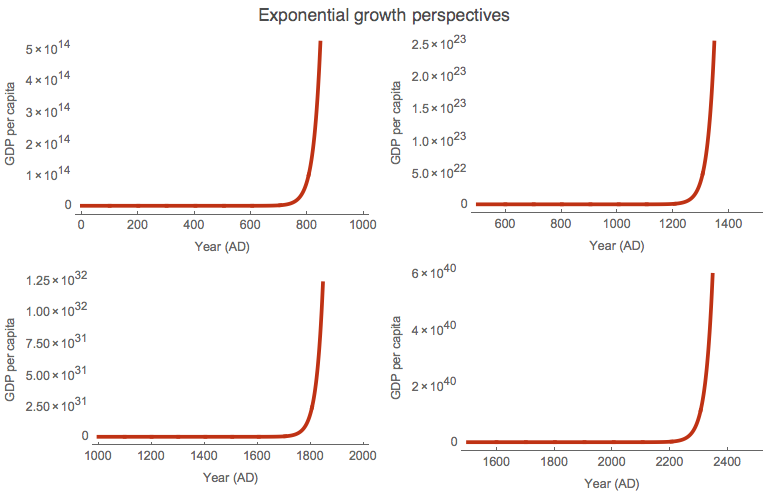 What do you notice?

Looking at the same function at different points in time produces the same shape. In fact the ‘hockey-stick’ effect, that suggests the recent period is unusual, is just as prominent 1000 years ago as it is today. Here we merely have a doubling of the indicator every 25 years, and that's what it looks like.

The lesson here is that at any point in history this same graph could be produced because the rate of growth is constant. It tells us nothing special about the current period.

But what about the likelihood of reaching a limit? Doesn't the exponential growth approach any limit more rapidly each period?

Sure, but we don't know whether this pattern is actually a logistic function rather than an exponential one. Notice in the graphs below that a logistic function can look very much like the exponential growth charts in the tweet. But rather than hit some catastrophic limit, the rate of growth slows as the limit gets closer. This type of function is commonly used to describe population dynamics, and with recently falling global population growth, it seems that such a pattern for human population growth is also likely. 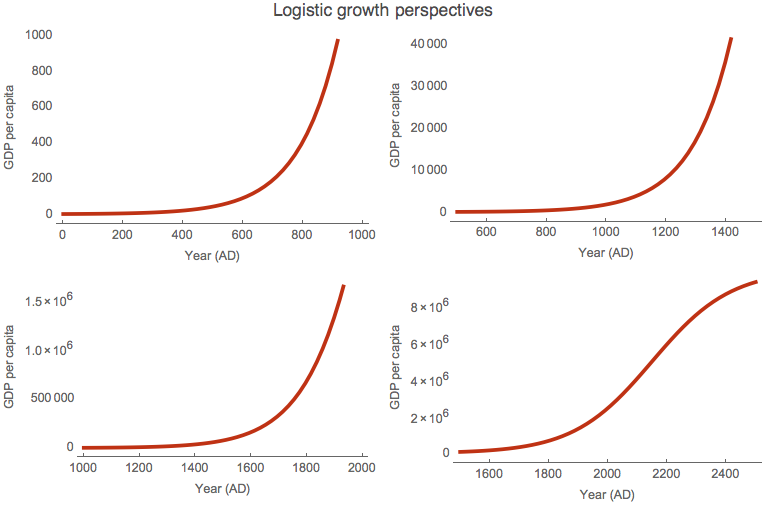 Remember this next time you see an exponential graph that is argued to support an argument that there is something unusual about recent history, or that a sudden rapid collapse is imminent.
Email ThisBlogThis!Share to TwitterShare to FacebookShare to Pinterest