Krugman vs Bank of England (or QE bails out the rich)

I like Krugman. He takes a common sense approach to economics and writes clearly for a broad audience.

But, like others, I have to take issue with his insistence that quantitative easing (QE) and low interest rates punish the wealthy and fulfil some progressive distributional objective. In fact they achieve the opposite result.

Here is the crux of his argument.

But I now think that class interests also operate through a cruder, more direct channel. Quite simply, easy-money policies, while they may help the economy as a whole, are directly detrimental to people who get a lot of their income from bonds and other interest-paying assets — and this mainly means the very wealthy, in particular the top 0.01 percent.

He supports his case with this graph in a previous post showing the loss of interest income for the top 10% of households. 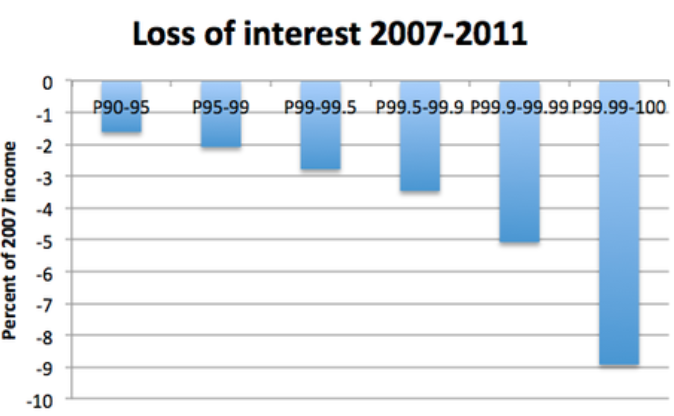 But if you are going to talk about distributional effects, you have to compare the whole distribution, not just the change over time of one cohort. Because this graph can show the exact opposite point if households in the lower income deciles have had their incomes decrease by more than this amount. In this case all it takes is for low income households to have a 5% lower real income in 2011 than 2007 and we end up with a net transfer towards the top 10%.

The simple problem here is that Krugman fails to observe the change in the value of assets and instead focuses merely on the cash-flow. It is a simple fact that any asset that is a promise of future cash flows will increase in price in a low interest rate environment compared to a high interest rate environment (holding all else constant). Even the RBA shows how this effect has been a major contributor to last decade’s Australian house price boom.

More over, low interest rates are even more of a transfer to those who are highly leveraged into asset markets - property, equities and so forth. Since they receive a double effect of lower borrowing costs and supported asset prices.

To be clear, the table below shows a basic example of an asset representing a right to a cash-flow of 5 each year (call is $5, call it $5million, it doesn’t matter for this purpose).

If the asset is purchased in the first time period, assuming for the sake of the argument that risks are perfectly captured in the yield, that there is no net positive return. You buy an asset yielding 5%, it costs you, in risk adjusted terms, 5% to buy it, so there is no economic rent to speak of here.

Then in a later period the interest rate falls, and this asset is traded at a price reflecting a lower yield. That means the price has increased. Over the period when interests rates fall from 5% to 3% in this example, there has been a massive 67% gain in price of this asset, which can all be considered an economic rent.

We can also consider the case where the cash-flow is declines, which probably more accurately reflects the post-crisis situation. Here the cash flows, due to a downturn in real economic activity, are falling, but so are that traded yields (the interest rate), and hence the price is supported and owners of these assets gain from capital appreciation.

This is the exact scenario I see Krugman presenting. The cash-flows from owning particular assets have fallen, so interest incomes will be down for asset owners, but the prices have risen due to the interest rate adjustment. We see evidence of this all around with equities trading at record highs.

To be clear, this is not some absurd reasoning I just made up (although it does overlook the expectation of capital growth in prices to make a simpler point). The Bank of England has conveniently published a document outlining their view on the distributional impacts of low rates and their QE program.


By pushing up a range of asset prices, asset purchases have boosted the value of households’ financial wealth held outside pension funds, but holdings are heavily skewed with the top 5% of households holding 40% of these assets.

Which is the exact opposite of Krugman’s point, since he overlooks the prices of assets altogether. And now the BoE’s take on how QE and low interest rates have affected bond holders


By pushing down gilt yields, QE has reduced the annuity rate. But the flipside of that fall in yields has been a rise in the price of both bonds and equities held in those pension pots. Another way of explaining this is that the income flows from a pension pot (dividends in the case of equities and coupons in the case of bonds) will not be reduced by QE. Indeed, if the pension pot contains equities, then the flows could even be higher as a result of increased dividend payments from the boost to the wider economy from QE.

There you have it. Low interest rates and asset purchases bail out the rich. I hope Krugman reads this and thinks more carefully, because he has a very wide influence in the public debate about these issues.
Email ThisBlogThis!Share to TwitterShare to FacebookShare to Pinterest