Are the LDP’s principles useful for policy-making? (No) 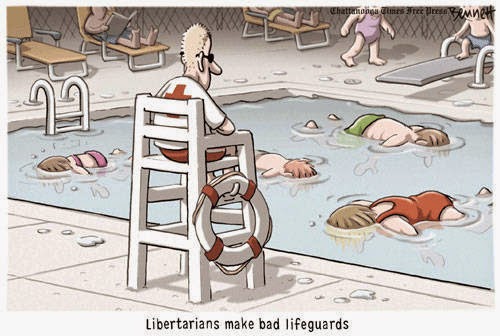 The big news in Australian politics has been the new rabble of Senators. David Leyonhjelm of the Liberal Democratic Party (LDP) is one surprise newcomer.

Leyonhjelm is desperately trying to differentiate himself and his party as one based on a set of principles that promote freedom in both economic and personal realms.

But every time I read or hear anything he says alarm bells ring.

I want to show in this post that the LDP principles he so feverishly promotes offer no guidance on making real political decisions that involve trading-off rights and responsibilities between different segments of society.

As a basic example, if I believed in the principle that football players should be free to make individual choices about their kicks, passes, and various strategies, within the rules of football, how does that guide me in the creation of the rules themselves? It merely assumes the existence of appropriate rules, yet the government, in this case football’s governing body, has the task of creating the rules.

Take another example. I believe in the freedom of drivers to choose their routes on the road. Okay fine. But that’s not going to help in deciding the rules of the road that allow people to cooperate to the degree necessary to ensure their freedom to choose. Should we have traffic lights? Stop signs? How will rights of way be decided or enforced? At every stage of these many decisions involved in rule-making there are trade-offs between groups to consider.

Even if you believe there should be no rule governing a particular behaviour on the road, that is itself still a choice that needs to be assessed against alternatives.

Let us now take a quick look at the principles of the LDP.

Their first economic principle is “free markets and freedom of choice”. Let’s pick it apart a little. The existence of any market, ‘free’ or otherwise, implies many things, such as private property, extensive contract and tort law, regulations against fraud, theft, bankruptcy, and many regulations governing externalities and so forth.

The government’s role is to decide which trade-offs are acceptable in the legal structures and institutions that allow any market to function. Having a principle that assumes the existence of a market of some sort doesn’t provide any guidance on what sort of legal structure will provide a more, or less, free market.

Minimal regulation is also a principle that doesn’t provide much guidance on how to write regulations. We know from many political exercises (for example in Queensland recently when the Newman government was elected), that legislation page-counts are no guide to the actual tangible impact on productive activity and organisation from a piece of regulation.

Then there is a principle of ‘widespread ownership of private property’. Really?

And if your free markets don’t provide this outcome, then what?

At every turn the LDP want to privatise public assets and abolish government service provision; in health, education, public utilities and transport, and just about everything else. It’s almost like market failures don’t exist, and that somehow granting various monopoly rights to vast parts of what was the public realm, would provide immediate and perfect equality of opportunity and harmony amongst citizens.

It’s the dream of rich old men; a utopia that no one with a sane mind would consider.

Okay, let’s move on to social policies; perhaps this is easier territory.

Again we see freedom professed as a guiding principle, only this time it’s personal. But aren’t all individual freedoms really two-sided? Ronald Coase explained this principle in much detail - that private rights are inherently arbitrary and two-sided.

Here’s one a little closer to home. The LDP policy on religion states they “Support the freedom of private individuals and organisations to apply religious tests for membership or employment”. But what about our freedom from such treatment?

The LDP have a firearm policy that is straight from the playbook of the NRA. ‘Good’ people should all have guns, so that ‘bad’ people cannot do ‘bad’ things. As if we all know exactly who is who at all times, and what is good and bad. And like all their personal freedoms, they neglect the freedom to live in an unarmed society.

Next, to the LDP’s government principles. Again, not much of substance here. Be ethical and impartial. Whose ethics? The LDP’s or the Labor Party’s?

The last point states something of a goal for the LDP. So I’ll let their competitive federalism stand.

The LDP’s international principles are some of the strangest. Their principle of free trade in ideas and culture, freedom and human rights, seems rather in conflict with Leyonhjelm’s comments about immigration - “some cultures are incompatible with our way of life”.

In the LDP policy on immigration they seem to want to crack down on ‘unauthorised’ arrivals, but promote ‘authorised’ ones. As if there is no debate about the laws that determine who is authorised and who is not.

So where’s the freedom and human rights? Where’s the free trade in ideas and culture. Or aren’t these really guiding principles at all?

My prediction is that Leyonhjelm will reveal in the coming years that his, and the LDP’s, beliefs in freedom are just as arbitrary as any other. They will pick and choose the freedoms they like based on their personal biases and appeals to their support base. This is nothing new in politics. It is the nature of the game. Just don’t fall for the idea that this party is principled.
Email ThisBlogThis!Share to TwitterShare to FacebookShare to Pinterest