Retirement confusion: Savings are not investment

I’m constantly surprised at how fundamental concepts in economics are so easily confused as soon as they are applied to real-life policy.

Take the issue of fully-funded versus pay-go pension systems. In a pay-go system, pensions are paid to qualifying individuals each year by the government out of general revenues. In the fully-funded system, individuals are forced to save in their working years to fund their retirement in later years.

Australia and many other countries have transitioned towards fully funded systems in the past couple of decades. This change can partly be attributed to a fear that pay-go systems are unsustainable, and partly because economic theory suggests that fully funded systems can increase the growth path of the economy through their effect on increasing savings, and therefore increased investment.

But the fear of unsustainable pay-go pensions, and the growth effects of fully funded systems, are both unfounded.

This is a very confusing area for many people, which is why it was so important to clarify the difference between saving and investment in my earlier post. When an individual or group within society spends less of their income, this does not automatically imply increased investment in new capital goods in proportion to that saving.


When my fully-funded pension account buys BHP shares, it buys them from existing owners, who may very well be retirees selling down their assets to fund their retirement.

Using this basic example we can see that a fully funded pension system involves the young buying assets from the old, which is a transfer to the old in exchange for an asset.

But this is exactly what a pay-go system is as well. It is a transfer from the young to the old via the tax system rather than via other financial vehicles. Or we could think of it as an exchange of the asset of a guaranteed retirement income instead of a BHP share. The diagram below summarises this point.

Regarding the investment effects, some have argued that when pension accounts buy shares they force prices up, thereby generating more investment. But to believe this you then need to explain some mechanism by which the share price was a binding constraint on new investment.

Does the BHP share price determine investment decisions in new mining ventures? Or is it the expected price path of the minerals, the ability to secure contracts for future output, and the costs of the facility?

Sure, there may be some small cases where equity value is binding, but that doesn’t mean that an investment opportunity will not instead be undertaken by a separate entity that doesn’t have that constraint.

Others have suggested that the share of savings that does go to direct investment funding, such as the example here, is sufficient to make the point. To me, this is the rare exception that proves the general rule and moreover makes the point that under normal circumstances debt, in the form of bank lending, is the almost universal investment funding tool.

To wrap up this point, here is the breakdown of assets in Australian superannuation (retirement savings) accounts from APRA. Only a very small share of these assets could be interpreted as being new investment. Most shares would be purchases of existing assets, with a rare exception of capital raising for new ventures. Cash and property are obviously not related to new investment, leaving fixed interest assets that may also involve a component of new investment. 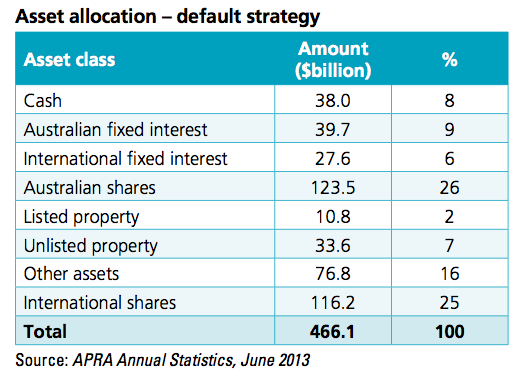 The other important point here is that anything that makes a pay-go system unsustainable also makes a fully-funded system unsustainable, though I think neither system is. Each is merely a transfer from one group to another in society, with the same level of output to be shared at each point in time.

Let’s be clear about this. In the pay-go system, wealth is transferred between taxpayers and the retirees each year. The retirees share of the economic pie is whatever is determined by demographics and government policy on retirement pensions.

In the fully-funded system, we have the bizarre situation of working age people buying assets from retired people who had accumulated them in the past, so that they can then sell them when they retire. There is a lot of asset churn in this system to generate what is a transfer from working age to the retired at all points in time. In essence, it is a pay-go system with the added cost of private funds management.

I have made this point in more detail in the past.

My point here is that this is yet another example of economists inappropriately equating savings, which are transfers, with investment, which is the production of new capital equipment.
Email ThisBlogThis!Share to TwitterShare to FacebookShare to Pinterest