Robinson: An introduction to economic doctrine 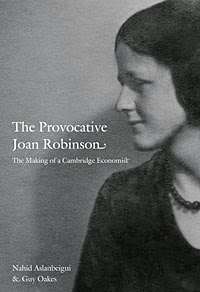 Imagine a modern economics textbook in three parts, the last two being Analysis and Modern Problems. What do you think would the first part would be called?

I doubt your answer was Economic Doctrines. But that’s exactly how Joan Robinson began her textbook An Introduction to Modern Economics back in 1973.

For Robinson, rebuilding economics teaching meant starting with an understanding of evolving economic doctrines. As such, she begins her revolutionary textbook with a summary of the defining battles within economic philosophy, tracing the key players and their moral and logical arguments since the writings of Fançois Quesnay in the 18th century.

Robinson’s book, written with John Eatwell, was supposed to offer a fresh new way to teach economics that would replace the ‘Samuelson’ approach to economic teaching. It failed to do so. In fact, it failed so catastrophically that it never gained one-tenth the circulation of Samuelson’s principles text in its short publishing history, and has been all but forgotten in modern discussions about rewriting the economics curriculum. So unpopular is this book that it is deemed unworthy of shelf space at my university library, and instead resides in an off-site library storage facility.

But its popularity should definitely not be a guide to its quality.


For those who may never read the book I want to highlight some of the more interesting content that you won’t easily find elsewhere, and that is perhaps even more important and relevant today than forty years ago when the book was first published.

As a recently trained economist, one of the more shocking things about Robinson’s textbook is the way many core features of neoclassical economics are brushed away in a sentence or paragraph as mere metaphysical reasoning. She defines such reasoning as being “applied to a use of language that conveys no factual information, describes no logical relations nor gives precise instructions and yet is calculated to affect conduct.” One such concept is utility, which is described as follows when it is first introduced

Another metaphysical concept is that of profit maximisation; which is purely defined in terms of itself. While it may seem a little smug of Robinson to dismiss these ideas, the unscientific nature of metaphysical concepts renders much of the economic approach to generating knowledge utterly useless. Not a week passes when I don’t see a new economics paper or seminar that makes appeals to unmeasurable and unknowable concepts, defined purely in terms of themselves, that exist only as story-telling devices. Just a few days ago I sat in a seminar where labour markets were being ‘modelled’ in terms of an unquantifiable concept of search efficiency, which could not be defined without circular reasoning and offered no testable predictions.

Another feature of Robinson’s book is that unlike our new Australian learning standards in economics, her text includes the following index items

For anyone with a mainstream economics education, these terms would seem wildly out of place. Even the mere suggestion of morality in economics these days will cast you as an outsider and ruin your career prospects. Economists love to see themselves as value-free, and collectively ignore the reality that any welfare analysis is inherently a moral analysis.

When discussing the rise of the neoclassicists, Robinson writes critically of their core construct of the Walrasian equilibrium.


Walras himself realised that it is not practicable to reach the equilibrium position by trail and error, but he imagined that buyers and sellers could proceed by shouting out demands and offers, finding the equilibrium set of outputs and prices before production and trade took place.

His modern followers seem to have given up pretending that this is possible, and content themselves with finding conditions necessary to ensure that at least one position of equilibrium exists.

Oh my. She really did just say that a great bulk of academic economists have simply given up on reality to content themselves with mathematical game-playing. Which implies that much of neoclassical theory itself is unable to be reconciled with real processes in the economy.

Finally, we get a taste of the controversy that surrounds the definition of capital which is generally omitted from introductory texts. Robinson includes Thorstein Veblen’s view on the orthodoxy from his review of John Bates Clarks’s The Distribution of Wealth to make the point.


Here, as elsewhere in Mr Clark’s writings, much is made of the doctrine that the two facts of ‘capital’ and ‘capital goods’ are conceptually distinct, though substantially identical. The two terms cover virtually the same facts as would be covered by the terms ‘pecuniary capital’ and ‘industrial equipment’…

This conception of capital, as a physically ‘abiding entity’ constituted by the succession of productive goods that make up the industrial equipment, breaks downs in Mr Clark’s own use of it when he comes to speak of the mobility of capital; that is to say, so soon as he makes use of it…

The continuum in which the ‘abiding entity’ of capital resides is a continuity of ownership, not a physical fact. The continuity, in fact, is of an immaterial nature, a matter of legal rights, of contract, of purchase and sale.

Just why this patent state of the case is overlooked, as it somewhat elaborately is, is not easily seen. But it is plain that, if the concept of capital were elaborated from observation of current business practice, it would be found that ‘capital’ is a pecuniary fact, not a mechanical one; that it is an outcome of a valuation, depending immediately on the state of mind of the valuers; and that the specific marks of capital, by which it is distinguishable from other facts, are of an immaterial character.

What we see in this book is what I believe is an honest appraisal of economics. The myths and legends that are passed down as fact in most textbooks are shown to be anything but. Even Adam Smith’s pin factory and the lessons of the division of labour are challenged.

The book does leave the reader wondering exactly how economic research should proceed. I think Robinson would be impressed by the gains made by experimental economics researchers, particularly because their findings more often than not challenge some element of neoclassical doctrine.

If you want an introduction to economics that acknowledges the rather limited knowledge generated by the field and starts from fundamental moral foundations, then you could do worse than tracking down a copy of Robinson and Eatwell’s textbook from your local library's storage shed.
Email ThisBlogThis!Share to TwitterShare to FacebookShare to Pinterest