Corrupting Piketty in the 21st century 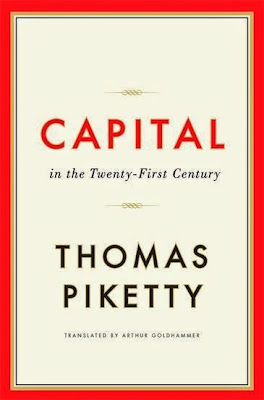 To me three things are clear to be about this book. First, it is a timely reminder that distribution of resources within society matters. This is especially important for an economics profession who has often ignored the issue and whose core analytical framework is a completely inappropriate tool for its analysis.

Second, and this is quite a surprise, the mainstream economics profession seems to be rather accepting of the book, which, when I read it, seemed to make the claim that most of their scholarly methods are flawed and that the economics profession knows very little about the more important elements of social organisation. While on the surface this appears to be a mature response by the profession to valid criticisms, I fear that the profession will corrupt the message of the book and will unfortunately not have the impact on improving economic scholarship that it seems intended to have.

Third, and this is my one personal gripe, the book fails to acknowledge the many social processes studied by sociologists and even ecologists that have been used to explain unequal outcomes in a wide variety of settings. For example, the process of preferential attachment is fundamental to producing the unequal distribution of the success of artists, musicians and even, ironically, authors. Such a process can not only explain the broader inequalities in terms of access to resources (income and wealth), but also the inequality of book success, where Piketty finds himself in the top 1% of economics authors (and there really is no shortage of books covering similar topics recently, for example here, here, here and here).

I want to now explore these latter two point in more detail.

The surprise hero
The mainstream acceptance of the book in economic circles is, in my view, due to the simplicity of the r > g story Piketty weaves into the long run inequality trends he has meticulously pieced together. This story is compatible with many of ridiculously simplistic explanations economists love, such as technology change, education, regulatory intervention in labour markets, and just about anything else. Yes, the mainstream is stuck on these same metaphysical explanations that Henry George made fun of back in the 1870s.

What this means then is that r > g heuristic Piketty uses is not a precise model applicable to a wide variety of circumstance, but a general framework in which a variety of political, social and institutional models will sit. This heuristic basically says that the rate of return to capital owners tends to exceed the rate rate of growth of the economy, and hence increases inequality over time. It is a similar idea to the model from Chapter 4 of Joseph Stiglitz’s PhD thesis from 1966. Piketty summarises the process as follows:


When the rate of return on capital significantly exceeds the growth rate of the economy (as it did through much of history until the nineteenth century and as is likely to be the case again in the twenty-first century), then it logically follows that inherited wealth grows faster than output and income. People with inherited wealth need save only a portion of their income from capital to see that capital grow more quickly than the economy as a whole. Under such conditions, it is almost inevitable that inherited wealth will dominate wealth amassed from a lifetime’s labor by a wide margin, and the concentration of capital will attain extremely high levels—levels potentially incompatible with the meritocratic values and principles of social justice fundamental to modern democratic societies.

This explanation is general enough not to exclude many popular but flawed neoclassical stories about inequality. Indeed Piketty peppers his explanations of potential forces leading to a divergence of wealth with hints of neoclassical theories, which definitely help him appeal to his intended audience. But ultimately he paints a political, social and institutional story of wealth distribution, one which the economic reviews seem to miss.


the inequality r > g is a contingent historical proposition, which is true in some periods and political contexts and not in others.

It is unfortunate that the definition of capital that Piketty uses does not distinguish between scarce factors of production, like land, patents and other State-granted monopoly rights, and produced factors of production, like buildings and so forth. This matters in theoretical discussions because produced factors of production don’t necessarily produce any return unless coupled with a scarce factor of production. James Galbraith noted this in his review, along with other important measurement issues such as implicitly using value as a measure of quantity (which has been criticised elsewhere). These are certainly correct, but one can’t expect appropriate data to emerge from the history books that can be easily segregated into modern definitions. Indeed, others have argued that Piketty uses capital in the more general and appropriate way as the monetary value of assets able to be used as collateral. Which is a fine debate to have, but not much help when the body of existing economic theory uses the term to mean something else. In all, this confusion is likely to be exploited by those wishing to leverage Piketty’s new-found popularity to their advantage.

One thing we miss in this process is that if ownership of wealth was equally distributed, it wouldn’t matter whether r > g in terms of its impact on inequality. Or more precisely, institutional settings can be designed to combat any social force that concentrates wealth if we so desire and if it is politically palatable.

Corrupting the message
The Slack Wire's Suresh Naidu has already noted these obscure interpretations of the book within economics, calling the corrupting process ‘bastard-Pikettyism’. Like me, he fears the valid methodological critiques will be ignored, and the main message will be propagandised into one that is supportive of the current mainstream approach.

Let’s not pretend this isn’t the way new ideas are dealt with by the power structures within the economics tribe. Thomas Palley has extensively discussed how this same process happened following the financial crisis. He calls it ‘Gattopardo economics’, and his subtitle sums up the process: The crisis and the mainstream response of change that keeps things the same.

We can see this starting in quite a few of the now hundreds of reviews and comments emerging online. For example, Tyler Cowen seems to want to corrupt the idea of capital back into a physical thing and essentially say that the past is not a good guide to the future. Of course, Piketty is no fool and completely acknowledges the uncertainty, simply noting that we should learn lessons from history that reverting toward equality is no automatic outcome. In my mind the vagueness of the use of the term capital is allowing the profession to read it as they see fit, ignoring the political and institutional environment.

Robert Solow seems to like the book (32min mark of linked video), and particularly the idea of an r > g mechanism. We see Solow at pains to fit Piketty’s commentary on the long-run picture of inequality within his ‘model thinking’. When he discusses what he thinks is going on with the gap between r and g he says:


On the pure theory side, the sorts of influences that appear in the book suggest that there will be an increase in the capital output ratio - this is likely if the law of diminishing returns is still operating at all - is likely to push the realised rate of return on capital down a little bit. You can ask how much down if you make the technical calculations that one would normally make, and that rest on assumptions that are already in Thomas’s book, you would expect the rate of return on capital to fall when the permanent growth rate falls, and fall somewhat better than one to one, so that the gap between r and g is likely to remains positive to be somewhat narrower. So there is no reason to suggest that this process of accumulation of wealth and income at the top of the distribution to top increasing.

Oh no, please, not those technical calculations.

The great fear I have is that the economics profession will use the book to argue that inequality is a complex issue and that changing the distribution of wealth is technically difficult. It is not. There are endless policy options for reducing inequality that are simple to implement, and often are implemented (or have been) in some part of the world. It’s not rocket science. Sure, politically redistribution is difficult. But it is not the job of the economics profession to pander to current political sensitivities - we should be offering solutions.

Here are just a few; mortgage (and other) lending constraints, limits to rent increases and more secure housing tenure for renters, limits on executive pay, higher welfare support to the most needy, shifting the tax base away from wages towards land and land-like resources, stop privatising public utilities, greater public investment in network infrastructure, and more.

Was it r > g that got Piketty’s book into the 1%?
The inequality of media attention lavished on this book [1], in preference over the many other equally worthy new economic books, is part of the same social mystery that the book itself attempts to resolve.

In my view, it is clear that owning wealth is an advantage to acquiring more wealth. In sociology, and on the fringes of economics, the process of preferential attachment is being regularly identified in social systems. This review is helpful in getting acquainted with the idea.

While the idea that r > g suggests a process of cumulative advantage, the mechanisms at play in such a process are unable to be modelled in a world of perfect markets. The fundamental feature of capitalism, it seems, is not the perfection it is made out to be in economic theory. This will be hard to deal with for the true believers in the profession.

Preferential attachment processes at the individual level can, and have been, identified empirically.

We know that already large firms are more likely to win government contracts, thus reinforcing their dominant position. We observe that corporate directors with more cross-directorships are more likely to get new directorship positions. We know that the current level of popularity of books, music and films is a good predictor of their future popularity and that ‘superstars’ are the product of a cascading process of gaining advantages.

And more relevant to this discussion, am I likely to buy, read and review a book that already has gained significant media attention than one that hasn’t? Yep.

To maintain a degree of fairness and equality when there is widespread preferential attachment occurring in society there must either be either a) institutional limits on these processes, or b) active redistribution to counteract the undesired results. In sports we see examples of a), where team salary caps are common. Piketty notes the historical role of taxes on capital as an example of b) and promotes such solutions later in the book.

To be clear, Piketty makes a great contribution to economics, especially in his call to tightly link economic analysis to historical political and social conditions, rather than pretend to solve problems of the world from detached abstract reasoning. However like all reformation efforts in the discipline, his (and fellow students of inequality) will be met by fierce internal opposition, the ultimate outcome of which is to twist his work into something it is not in order to pretend that it supports the status quo. This happened to Keynes, Coase, it happened following the Cambridge controversy, it happened in macro after the financial crisis, and it will happen again now. There are simply too many vested interests who want the profession to continue to come to the same conclusions.