I have written about real wealth and Australia's external position in the past; in relation to a proposal for a sovereign wealth fund and exactly what it would mean for fiscal balances, and in relation to domestic asset prices (housing).

Today I want to share a graph based on yesterday's data release of Australia's external position.  I've inverted it to represent that Australia's foreign 'investment' is on the liabilities side of the balance sheet, not the asset side.

I also wanted to share a couple of graphs that extend on earlier analysis of long term housing metrics. The point I want to make is that since housing is a non-tradable good, the expectation would be that the price of housing would increase in line with other locally produced goods.

I can produce the same 'Excess price growth' charts for both non-tradables and services indexes of the CPI. They indicate simply that Australia's external position is allowing a huge shift in relative prices - housing and other locally produced goods seems expensive simply because imported goods are so cheap.

Ultimately this shift is a policy choice, since at any point we could intervene in currency markets (given the political will) to attract more diverse local investment. 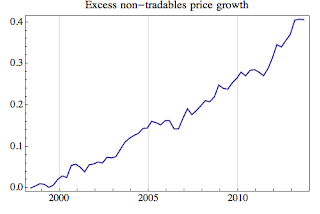 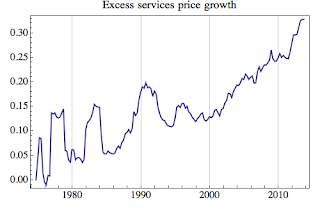 The lesson here is that any whinge about prices and incomes in Australia must look at the big picture, which has been driven to a large extend by our rather backwards attitude to foreign debt and laissez faire approach to currency markets.  Anything made locally is expensive even to Aussies. It is a long road back if we want to turn these patterns around.

PS. I'm trying a new online graphing tool Datawrapper that I see Greg Jericho using to great effect.  Unfortunately it's not playing too nice today so only a single graph as a preview of what is to come.
Email ThisBlogThis!Share to TwitterShare to FacebookShare to Pinterest