You can’t borrow from the future! 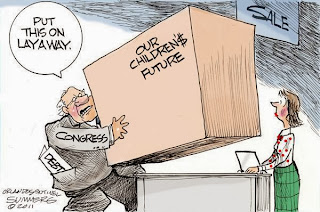 “We are borrowing from the future” is a common phrase you might hear from economists musing about the state of the economy; about the behaviour of individuals, businesses and especially of government.

These statements arise in discussions about ageing, stimulus, social security, public investment, public debts, health, education and almost every other public policy topics in which economists self-declare some degree of expertise. To really drive home the entrenched nature of such thinking in economics, here’s Satyajit Das saying “Debt allows society to borrow from the future” and here’s something purporting to be an economics text saying the same thing.

Oh, and it’s a favourite line the double-speak repertoire of Tony Abbott and Joe Hockey.

All of this is truly odd. It’s nonsense really. Perhaps expected from politicians, but not from a profession that usually ‘looks through’ the veil of money to the utilisation of real resources in the economy.

The confusion rests on a conflation of money with resources; if money equals a claim on resources then borrowed money, or debts in general, therefore equates to resources borrowed from the future. Will Ricardian Equivalence ever die?

All debts are transfers of purchasing power for current resources, despite new bank-issued debts not requiring current funding from a third party (as in the loanable funds model). In a direct credit transaction (peer to peer lending or credit channels including loanable funds) one party gives up their current purchasing power to another, with repayments and interest being a reversing of the transaction over time. No borrowing from the future there.

When new money is created through lending from the banking system, the same thing occurs, except that the society as a whole transfers resources to the entity spending the new money through inflation via their newly available purchasing power. This is usually known as by the concept of seniorage, though rarely is new lending discussed in these terms.

The whole point is that future resources don’t exist yet, so they can’t be consumed in the present! There is no transfer of resources - no hover boards are removed from the future and brought into the present via lending.

Which brings us back to often hotly debated idea of counter-cyclical fiscal policy, which is fundamentally used to increase demand for current production outputs, increase labour demand and employment and inflation, and invest in capital goods to be used in future period to produce those as yet uncertain future products.

Luckily there are some common sense economists out there. At least there was back in 1961 when Abba Lerner wrote this note about the impossibility of shifting burdens onto the future for society as a whole in response to a rather confusing article attempting to say the opposite in the American Economics Association’s most prestigious journal in 1960. Some of the ‘new generation’ are feeling the need to repeat this mantra in blog form.

If all of this isn’t enough, here’s the clincher - if today’s debt is borrowing from future generations, can’t we simply use tomorrow’s debt to borrow from later future generations indefinitely for the infinite future? Yes, yes we can.

Money and debt are mere tools of social goals. They are not the real resources of the economy but records of transaction and ownership claims. We can change the rules at any point to suit our social desires - debts can be forgiven, defaulted on, inflated away, or they can be used to justify war.