Everything I was afraid to ask about Bitcoin but did 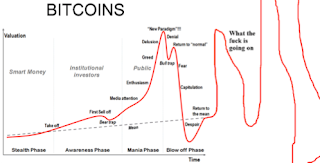 The econ-blogosphere has been Bitcoin crazy for a while now. I haven’t quite understood what all the fuss is about, and knowing the personalities involved in much of the hype, I was afraid to ask too many detailed questions.

But I did anyway.

I finally put together my views following Rabee Tourky’s post at Core Economics, and a recent note by CommSec’s Craig James earlier in the week.

So what are the big questions about Bitcoin that need answering? There are two: What is its purpose? And, how will it maintain value and avoid volatility?

To answer the first question it is worth starting with Bitcoin founder Satoshi Nakamoto’s paper about a peer-to-peer electronic cash system. He repeatedly remarks that the benefit of electronic cash is being able to avoid intermediary financial institutions, thus cutting down transaction costs, and that the reversibility of such facilitated transitions is an inherent weakness. I quote from the paper at length.


While the system works well enough for most transactions, it still suffers from the inherent weaknesses of the trust based model. Completely non-reversible transactions are not really possible, since financial institutions cannot avoid mediating disputes. The cost of mediation increases transaction costs, limiting the minimum practical transaction size and cutting off the possibility for small casual transactions, and there is a broader cost in the loss of ability to make non-reversible payments for non- reversible services. With the possibility of reversal, the need for trust spreads. Merchants must be wary of their customers, hassling them for more information than they would otherwise need. A certain percentage of fraud is accepted as unavoidable. These costs and payment uncertainties can be avoided in person by using physical currency, but no mechanism exists to make payments over a communications channel without a trusted party.

What is needed is an electronic payment system based on cryptographic proof instead of trust, allowing any two willing parties to transact directly with each other without the need for a trusted third party. Transactions that are computationally impractical to reverse would protect sellers from fraud, and routine escrow mechanisms could easily be implemented to protect buyers. In this paper, we propose a solution to the double-spending problem using a peer-to-peer distributed timestamp server to generate computational proof of the chronological order of transactions. The system is secure as long as honest nodes collectively control more CPU power than any cooperating group of attacker nodes.

Here’s where the circularity of arguments about trust comes in, and where my first question about the purpose of Bitcoin becomes rather confusing. What sort of transaction would buyers be willing to undertake without a trusted intermediary? Twitter was not much help either…


@Rumplestatskin it's not reversable so the transaction can be trusted - once it is done it's done
— marklanderson (@marklanderson) November 20, 2013

But even in the case of ‘dodgy anonymous transaction’ as one of my mates suggested on Facebook, the whole point of Bitcoin is a record of transactions or ‘money as memory’. A court could order Bitcoin's miners, online waller suppliers or others involved in the network to disclose knowledge of transaction details and wallet identities in any case. Not only that, US officials have shut down digital currency operations in the past.

Authorities have also been looking into the criminal aspects of virtual currencies. Wolf Richter’s exposition of Bitcoin examines some of their discussions.

Officials from the Secret Service, the Treasury’s Financial Crimes Enforcement Network, and the Justice Department bragged to the committee about successful investigations of crimes where bitcoin or other virtual currencies were used, including the busts of Silk Road, eGold, and Liberty Reserve. They were confident that they knew how to tamp down on criminal use of virtual currencies. No one expressed outright alarm about the new world of bit coin.

Since every transaction of every bitcoin is forever recorded and part of the system, Mythili Raman, acting assistant attorney general at the Justice Department’s criminal division, pointed out that “cash is still probably the best medium for laundering money.” And she admitted that “many virtual currency systems offer legitimate financial services and have the potential to promote more efficient global commerce.”

At the word legitimate, bitcoin soared. And I mean, SOARED.

My line of thinking about potential benefits of Bitcoins is to consider what sort of transaction I would like to be unable to reverse. Would I ever purchase items on eBay with irreversible electronic cash, assuming that eBay itself did not provide any other intermediary role apart from advertising? Nakamoto seems to suggest that the cost of financial intermediaries excludes very small transactions, yet facilities like Flatter seems to overcome this problem through batching transactions.

The success of Paypal as an online payment system is partly due to the insurance it buys for both buyer and seller for the transaction. Anyone who refused payment from Paypal would be signalling their untrustworthiness or unwillingness to meet conditions of any mediated dispute. The point being, rather than creating a payment system that doesn’t rely on trust, using Bitcoin over other payment methods will itself signal a lack of trust. All transactions require some trust. There is no escaping that. Online that is even more important. For example, you pay me with Bitcoins, then I don't post your goods, what recourse do you have?

So far there is no reasonable answer to my first question about the purpose of Bitcoins.

My second question unfortunately reveals similar unsatisfactory answers. If Bitcoins really are limited by constraints on ‘mining’, then that will mean that in a situation where they are in demand as a medium of exchange, they will also be increasing in value and be a means of investment. As more people prefer to hold Bitcoins as investments rather than exchange them, this will push their value higher still. If you can’t see it coming, the end result is a massive bubble followed by a crash when the herd realises that their investment value was purely based on herd mentality, without any fundamental resources backing it, and that the system is no longer being used as a medium of exchange. This view has been put forward previously by Eric Posner.

It’s not like alternative payment methods have not been tried many times before. Bartercard springs to mind as one system that survives in its business-to-business niche.

So let’s summarise. Bitcoins have been severely hyped online yet almost no one can suggest scenarios for both buyers and sellers in which they are actually a more useful medium of exchange than current costly reversible transactions. Furthermore, the ability for Bitcoins to hold there value is severely hampered by the nature of their technically limited supply. To top it off the only people I know of who have owned Bitcoins were speculating and never used them to transact. I can only conclude that this episode will go down in history as a lesson about the nature of money and trust in facilitating trade.