Back in May 2013 I called the end of Australia's slow melt in home prices.  I based this call on a number of market measures, but the crucial one was my own indicator of when to buy and sell housing.  I developed this indicator two years back as a way to capture the potential success of the investment strategy of 'buy on yields, sell on capital gains'. To reflect this strategy I use the ratio of mortgage interest to rental yields to capture the relative returns from yield versus the expected returns from capital gains.

The buy signal arrived at the beginning of 2013.  Since then prices have been rising again in most capital cities, but especially so in Sydney, which dominates the capital city housing prices indexes.  I have updated my chart to reflect this year's data, and extrapolated with predictions for December 2013. 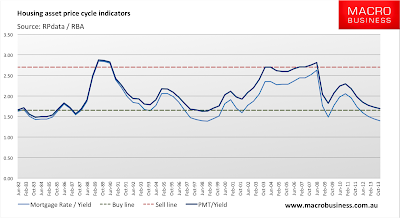 So why is this relevant now?

Because many people who correctly called the overvaluation of Australian housing prior to the financial crisis have ignored the massive transition that occurred during the past five years. The slow melt really did let out the air from the bubble.

Now we have a situation where just about every Australian economic commentator is picking sides in discussion about whether this year's price gains are a new bubble. A former bubble denier has even switched sides.

So why if the data is so plainly showing that we are very far from a bubble, and in fact prices are relatively low right now, why isn't it obvious to everyone? I can think of just a few reasons for confusion.


Today's news is that Sydney and Melbourne home prices are up over 5% for the September quarter. Yes, this is a new cycle, but we are only at the beginning and I believe it will be milder in nominal terms that previous cycles.
Email ThisBlogThis!Share to TwitterShare to FacebookShare to Pinterest