It’s budget time.  That means it’s time to switch off from the mainstream business news for a couple of weeks.  To help get you through I have a couple of notes about the ridiculous government debt hysteria that has broken out in this country in the past decade, and in many troubled nations (save Japan) since the financial crisis.

1. Nonsensical comparisons
First cab off the rank, debt to GDP. GDP is a measure of the volume of all transactions in the economy.  How is it related to the debt held by an institution that forms a minor fraction of the economy.  Why not compare BHP debt to Australia GDP?  The very fact that this nonsense ratio is considered important by macroeconomists as a determinant of anything is quite bizarre.

In any case, Australia is a world leader in low government debt.

Moreover, shouldn’t we consider the assets of an entity when considering its debts? Mmm.  What would the assets of the the Australian government be worth? This is a trick question.   There is basically no way of estimating the value of the nation’s shared public assets despite some valiant attempts.  These attempts put Australia’s wealth at over $6 trillion in 2008.  That’s around $300,000 per person.

But isn’t a better measure of the ‘sustainability of debt’ the interest cost to government revenue ratio? For example, here is a nice comparison of interest expense as a percentage of central government revenue.  Australia barely makes a showing. 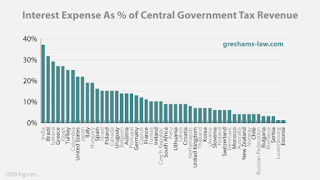 Should we not also consider that the same entity, in effect, sets the interest rate on those debts. As Dean Baker points out, this power really negates the ‘future burden’ of debt that the ‘household view’ of government budgets suggest.

And with all this focus on the crazy debt to GDP ratio, somehow the debts of the private sector are ignored.

2. Money is a human creation
Humans made every rule there is, and every rule can be changed. Keep this in mind.

But we also need to think about what interest payments actually are.  They are transfers from the debtor to creditors.  So when government pays interest on its debt, it is simply creating a transfer payment from taxpayers to holders of government bonds.  In many cases, these will be the same people or entities. Sometimes the owners of bonds will be foreign, but they only get paid interest in Australia dollars, which need to be spent within Australia, circulating through the economy.

Furthermore, the government can allow inflation to reduce the real size of the transfer involved with servicing its debt, and it can set the interest rate it pays.

We also need to fully comprehend Paul Krugman’s analysis of the Capitol HIll Babysitting Co-op Crisis. Put simple, the baby-sitting co-op created their own monetary system which fell into recession for lack of money.  Those who were running low on ‘baby sitting money’ because they had redeemed their vouchers over short period were worried about their shortage of remaining vouchers and stopped going out.  Those who had accumulated vouchers were worried about being unable to earn back their wealth should they start spending.

Notice that the money issued actually facilitated wealth inequality in the co-op.  Some families had very few vouchers left while the others were accumulating voucher wealth. We shouldn’t be surprised about this relationship between widening wealth gaps and business cycles.  And we shouldn’t be surprised that ancient remedies involved resetting debt periodically though jubilees - which would have worked perfectly well in the babysitting coop.

Ultimately we make the rules and can deal with the social and economics outcomes that arise from our economic system however we choose.  Fundamentally these choices are moral ones.

3. Equilibrium analysis does not apply
Most detractors of government debt seem to have a model of the economy in mind where the economy is in its magical equilibrium.  Then the government spends money, and since the model is always in equilibrium, the extra spending crowds out other spending exactly.  You might think I’m simplifying the argument.  I’m not.  There is not even money in the model at all.

The scope for adjustment to monetary policy, tax policy, inflation, all of which can reduce the debt interest size over time, are never discussed.

Remember debt and money are human inventions. Look at Japan to see what is possible and why we need considered analysis based on a proper understanding of money.

I hope, given the horrid state of quantitative macro that the RBA’s conference at the end of this year attracts some more robust analysis.
Email ThisBlogThis!Share to TwitterShare to FacebookShare to Pinterest