Two observations today.  The first is the graph below showing the median houshold income in the US since 2000 (ht.Felix Salmon).  Suprisingly the recovery from the 2008/09 recession has not resulted in an income boost, but in fact a dramatic continuation of the decline.

The second observation is that big banks on Wall Street are participating in a program to 'buy' their own police (ht.Yves Smith).  Which is all the more ironic this week as the Occupy Wall Street protestors rally against regulatory capture and the greed of the corporate world in seeking pursuing these ventures.  These officers are paid a token hourly rate by participating corporates, but their training and insurance is provided by the city.  Privatise profits, socialise losses.  That's not capitalism.

The fall out from the financial crisis is not over.
2 comments: Links to this post
Email ThisBlogThis!Share to TwitterShare to FacebookShare to Pinterest

Within 24 hours of the Victorian Coroner’s Prevention Unit releasing a background report into infant deaths from co-sleeping (parents sharing beds with infants), no less than 31 media outlets have reproduced the media release beneath fear-inducing, but unrelated, headlines.
A credible journalist would have read the Coroner’s background study and found that its conclusions are nothing like what the headlines suggest (perhaps the subeditors need to pull their heads in). As the study itself notes -

In fact, the study is just an analysis of a selection of case-study data to inform an ongoing investigation, for which the Victorian Coroner is currently seeking input.  The investigation was triggered because the proportion of unexplained infant ‘sleep’ deaths associated with co-sleeping increased from 21 to 45% between 2008 and 2010 (7 deaths to 15 deaths).

Is it too much to ask that journalists actually read the source of their article before writing and offer an objective view, rather than induce fear in new mothers with unrelated headlines and loose presentation of the facts?

If any of these journalists had modicum of mathematical aptitude they would have realised that proportion of infant deaths from co-sleeping is meaningless without knowing the proportion of infants who co-sleep.  If 90% of infants co-sleep, but the only make up 45% of unexplained sleeping deaths, then that is some evidence to show it is probably not a factor.

And most bizarrely, if the rate of co-sleeping is constant, than some other factor MUST be to blame for the changing ratio (even if that factor is random variability).

Unfortunately the evidence on sleeping habits of infants during this period is limited.  This survey from 2008 shows that, in a sample of 6383 breastfeeding mothers with babies under 1 year old, about 37% of mothers co-sleep with their baby. If that ratio has increased since that time it may very well explain most of the data seen by the Coroner.  Other evidence suggests that breastfeeding mothers are three-times more likely to bed-share, and the ABS estimates that about 48% of babies under one year of age are breastfed (consistent between 1995 and 2001), although the proportion declines from about 85% to 30% over the period.  This gives a rough picture of co-sleeping habits in 2008 of about 29% - with co-sleeping deaths at 21% in this period.

Given the massive limitations of Coroner’s report, and the inherent variability in the year-to-year infant deaths statistics (the same debate occurs around pool fencing laws), the report itself seemed rather lacking with regard to the extensive existing literature on the topic.  For example, this research surveyed 4656 families internationally about sleeping arrangements and found that

Rates of bedsharing varied considerably (2–88%) and it appeared to be more common in the samples with a lower awareness of SIDS, but not necessarily a high SIDS rate.

A summary of the results is graphed below. 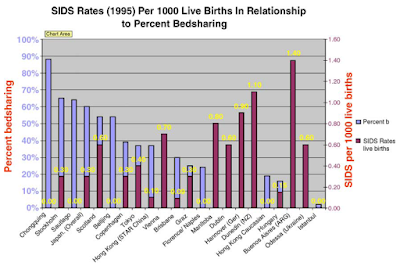 One major factor limiting the understanding of infant sleep death risks are omitted variables.  The ABS surveys on breastfeeding show strong trends between mother’s age and educational attainment and breastfeeding habit.  Also, the confounding factors of alcohol intake and smoking (and other health risk exposure) of the infant need to be taken into account to begin to point the finger at sleeping arrangements.  With this data available one can separate the impact of co-sleeping risks from the impact from other health risk on infant ‘sleep’ deaths. No doubt and the Coroner’s inquiry progresses these issues will be addressed in detail.
3 comments: Links to this post
Email ThisBlogThis!Share to TwitterShare to FacebookShare to Pinterest
Newer Posts Older Posts Home
Subscribe to: Posts (Atom)