Glenn Stevens recently noted that Australian households grew their consumption faster than their incomes from the mid 1990s till 2006 and that this wasn’t particularly sustainable. He produced the below chart.

As a nation we have consumed more than we have produced in 52 out of the last 53 years, and as the chart below shows, the growth in imports has far outweighed the growth in exports over the past decade. Is that sustainable? (note the chart is a chain volume measure and the $ values are not representative of the current price value of exports and imports)

As a backdrop to this situation, the Australian economy is in debt to the rest of the world, with a debt balance that continues to grow due to our persistent current account deficits (graphs below).

This background is an important consideration for policy makers listening to calls for Australia to establish a sovereign wealth fund (SWF) with revenue generated from a resource rent tax (let’s put aside the political debate for a moment).

Blogger Wildebeest has explained that in these macroeconomic conditions, a sovereign wealth fund is necessarily comprised of public and private debt. To use an analogy of the household, Australia would be investing in foreign markets by mortgaging the house – borrowing from foreigners to invest in foreign economies. We don’t actually have any sovereign wealth to speak of, unlike other countries where such funds operate (such as Norway and Saudi Arabia – see chart below comparing the current accounts of a selection of countries). 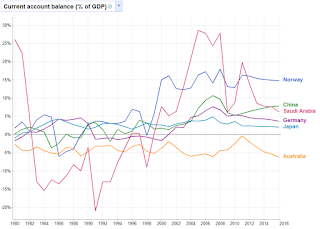 Even if as a nation we produced more than we consumed to actually generate sovereign wealth, there is a strong argument that we should use the income to continue to invest in our own economy, not in the economies of others. There is also an argument that a fund that simply chases short term returns abroad is not being used in the best long term interests of the country.

When some people talk about a sovereign wealth fund, as I have in the past, it usually goes hand-in-hand with some kind of tax regime to equalise the two speed economy – resources vs services and manufacturing. But these issues should be separated. By all means, if the people decide that fiscal policy should be used to ‘balance out’ the economy, then I see no reason not to. But whether the revenues from some kind of ‘equalising taxation’ should be invested abroad to protect the exchange rate is another question entirely.

I will expand these arguments surrounding optimal investment of surpluses in another post. Today, I want to explore in more detail why Australia, blessed with a massive capacity for agricultural production and plentiful mineral and energy resources, has consumed more that it has produced since WWII.

No doubt we are all aware that the terms of trade measure, the ratio of prices of exported goods to imported goods, is at an all time high. But terms of trade calculations tell us nothing about the volume of the countries' exports, and the net financial position.

A better measure of the international performance of a country is the current account, which considers volume, price and ‘non-traded’ financial transactions include ownership of foreign assets. A deficit in the current account occurs when a country's total imports of goods, services and transfers is greater than the country's total export of goods, services and transfers. This situation makes a country a net debtor to the rest of the world.

Whether this is a logical position is a debate for another time.

So let us take a look at the data to see exactly why Australia’s current account is persistently in the red.

First, the chart below shows the monthly balance of trade in goods and services in current dollars. Notice that it is rare for us to even export a higher value of goods and services than we import, happening just 4 out of the last 32 years. As the second chart above showed, with the recent trends of import volumes growing faster than export volumes it will get even more difficult to maintain a trade surplus if the terms of trade return to historical norms.

Next, we explore the capital and financial accounts, which measure changes in ownership of financial and non-financial assets, capital transfers, and transactions between residents and non residents. In particular, the account known as primary income, and the part of this account called investment income, is the key to understanding the current account. The ABS gives the following definitions -

Investment income is income generated by financial assets. This includes dividends paid on direct and portfolio equity investments and interest paid on debt securities and other debt instruments.

The graph below shows the balance of these two items alone (which comprise about 50% investment income). By my reasoning this means that foreigners are buying up more assets - property (the media has taken note of this in agriculture) and shares - and lending more to local households and businesses over time. 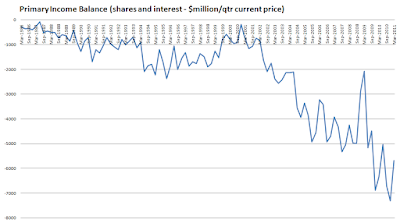 On primary income alone, Australia was $50billion in the red this past year. It takes a lot of trade in agricultural and mining products to offset this transfer of financial assets, and our best effort was a peak of $23.3billion of net exports of goods and services over the past 12 months with an all time high terms of trade (noting that even the balance of trade is usually negative).

So not only do we usually import more than we export, we sell more domestic assets than we buy foreign assets, and the incomes from the transfer of assets to foreign ownership far outweigh the value of the actual trade of goods and services.

A quick example.  The government owned business Telstra was privatised, and 25% of the company is now foreign owned.  That purchase by foreigners was a transfer of assets to foreign ownership as part of the capital accounts, and the dividends earned on the foreign owned portion now leave the country as part of the deficit in the primary income balance of the current account.  The same applies to foreign purchases of agricultural properties, mining shares, and lending to Australian businesses.

For the past 50 years is seems that Australia has been selling off its bountiful natural assets, and going into debt to the rest of the world. It makes me quite frustrated to even suggest that a fair portion of foreign debt incurred in the past decade was used to pay each other higher prices for existing houses, doing nothing to improve our productivity as a nation.

In a later post I will consider the Pitchford Thesis and policy remedies in more detail, including the role of the Foreign Investment Review Board.
Email ThisBlogThis!Share to TwitterShare to FacebookShare to Pinterest