To the cynic, the RBA’s role is to assure citizens that they have everything under control. In this light, we can see the recent speech delivered by Guy Debelle, the Assistant Governor, where he defends a persistent current account deficit. While he shows that much of the deficit has historically been the results of Australian banks seeking funding abroad (an inflow in the capital account), only to send interest payments back annually (an outflow in the current account), he artfully avoids the distasteful conclusion that we have gone into debt with the rest of the world to sell houses to each other at inflated prices.

The graph below shows that capital account flows since 1990. To translate, this account reflects the sum of our sale of assets to foreign ownership and our international debts incurred (inflows of funds), which is balance by outlfows of funds in the current account.

Should Australia have a sovereign wealth fund (SWF)? Whenever I hear this discussed my first thought is what do you mean by sovereign wealth? The Australian government can set aside a pool of funds at any time and call it whatever it wants. For example the “Future Fund” is listed in wikipedia as being an Australian sovereign wealth fund. The discussion in recent times seems to be linked to the once in a generation mining boom. Mining by definition extracts a non-renewable resource, so at a time when windfall profits are being made in mining, due to the demand from China, people understandably feel that some portion of that money should be set aside for the future. But does Australia actually have “sovereign wealth” from which a SWF can be funded?

There is a national accounting identity:

This says that taxes, T, minus government spending, G, plus private savings, S, minus private investment, I, must equal the current account CA. If (T - G) is positive then the government is running a surplus, if it is negative a deficit. (S - I) can be thought of as the net private sector savings. If it is positive then wealth is being accumulated. This accounting identity is what it is independent of ideology or political beliefs: the identity is the same whether you are progressive or conservative, or regardless what brand of economic belief system you subscribe to.

If the government sets up a SWF it could be funded from existing money:

or it could be funded by raising taxes

Australia has been running current account deficits for ever and a day. 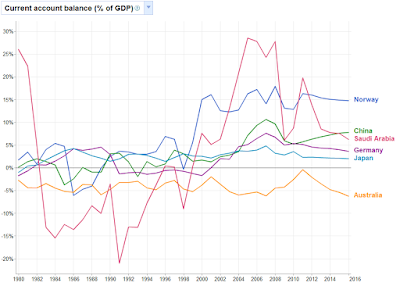 So the left hand side of the equation is negative, has been negative for a long time, and is likely to be negative for a long time. By definition the right hand side must equal the left hand side so must be negative. Now imagine that the government was to “quarantine” money in an investment fund which, we'll call a SWF. Prior to the formation of a SWF we know that (T – G) + (S – I) is a negative number. In order to create the SWF the net government and private sector balances have decreased by an amount equal to SWF:

If follows that while Australia runs a current account deficit, if money were to be placed in an investment fund by the government the rest of the government and private sector would be further indebted by an amount equal to the SWF. In such circumstances a sovereign wealth fund would be an inappropriate name since the fund would in fact be funded by driving the rest of the economy further into debt.

Contrast this with Norway which runs current account surpluses from which it follows that (T – G) + (S – I) is a positive number. As long as their SWF does not exceed the current account surplus, then money can be set aside while still leaving the net government and private sectors in surplus. Norway is accumulating sovereign wealth and is able to set aside this wealth in a SWF without making its economy indebted. Australia on the other hand, by running current account deficits is not accumulating sovereign wealth. While one sector of the economy, mining, may be doing very well, as a nation you have to ask “what sovereign wealth?” If an investment fund was created it would be from money which drives the remainder of the economy further into debt. Perhaps “sovereign debt fund”, SDF, would be a better description of such a fund. Creation of a SDF would have a negative effect on GDP growth.

This analysis of the national accounts also ties in to discussions about balanced budgets. We can see that if T – G = 0, i.e. the government balances its budget, then the private sector must carry the debt burden arising from the current account deficits. This presumably hasn't occurred to politicians from either persuasion who thump the table about the need for the budget to be balanced, or even worse for the budget to go into surplus. A balanced budget in these circumstances of endless current account deficits is likely to hamper GDP growth.

However should it be decided, for whatever reason, political or ideological, that Australia needs to run a sovereign investment fund, or needs to balance its budget, then the national discussion would be better off focussing on the structural reasons for continued current account deficits, since mandating a balanced government budget merely shifts the debt burden to the private sector rather than addressing the source or cause of the debt.

On the other hand the purpose of this article is not to make a case for or against current account deficits, but to note that if they exist it follows that an equivalent deficit must exist among the private and government sectors.