Housing bubble – my favourite quote ““No one can produce an explanation as to how fundamental factors can lead to a run-up in home sale prices, but not rents” (originally from here)

ACCC says milk war is actually what competition is all about

Dumbed down debate -
In 1860, in New York Abraham Lincoln began his campaign for the presidency with a very complex speech about slavery at the Cooper Union, 7500 words long, complex and nuanced. All four New York newspapers published the full text, which was sent by telegraph across the nation, widely read and discussed. In 1860 the technology was primitive but the ideas were profound and sophisticated. In 2011 technology is sophisticated but the ideas uttered by presidential aspirants are embarrassing in their banality, ignorance and naivety.

Dog whistle politics -
JASON REIFLER: Well we're certainly susceptible to misinformation in that once we believe something that is wrong then it's really difficult to correct people.

ELEANOR HALL: So we know that our ignorance about certain issues makes it easy for us to be misled but your research shows that we don't necessarily change our minds even when we have the facts.

I wonder about the geographical boundaries used for the capital city price indices. For example, the Brisbane City Council area would not include many homes that are in ‘greater Brisbane’, but not in the local government area. These areas include Moreton Bay Regional Council, Redlands and Ipswich (where a large portion of the new housing supply is located).  Different data providers using different areas would explain some of the inconsistencies in price movements detected. I would happy to hear some detail about this from the data providers. 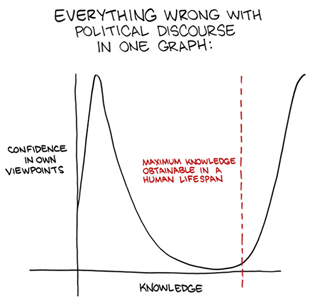 (ht: okakesan)
An explanation of equality concerns about progressive tax systems (ht: Chris Boulis)
Suppose that every day, ten men go out for beer and the bill for all ten comes to $100...
If they paid their bill the way we pay our taxes, it would go something like this...

The ten men drank in the bar every day and seemed quite happy with the arrangement, until one day, the owner threw them a curve ball. "Since you are all such good customers," he said, "I'm going to reduce the cost of your daily beer by $20". Drinks for the ten men would now cost just $80.

The group still wanted to pay their bill the way we pay our taxes. So the first four men were unaffected. They would still drink for free. But what about the other six men ? How could they divide the $20 windfall so that everyone would get his fair share?

They realized that $20 divided by six is $3.33. But if they subtracted that from everybody's share, then the fifth man and the sixth man would each end up being paid to drink his beer.

So, the bar owner suggested that it would be fair to reduce each man's bill by a higher percentage the poorer he was, to follow the principle of the tax system they had been using, and he proceeded to work out the amounts he suggested that each should now pay.

Each of the six was better off than before. And the first four continued to drink for free. But, once outside the bar, the men began to compare their savings.

"Yeah, that's right," exclaimed the fifth man. "I only saved a dollar too. It's unfair that he got ten times more benefit than me!"

"Wait a minute," yelled the first four men in unison, "we didn't get anything at all. This new tax system exploits the poor!"

The nine men surrounded the tenth and beat him up.

The next night the tenth man didn't show up for drinks, so the nine sat down and had their beers without him. But when it came time to pay the bill, they discovered something important. They didn't have enough money between all of them for even half of the bill!

And that, boys and girls, journalists and government ministers, is how our tax system works. The people who already pay the highest taxes will naturally get the most benefit from a tax reduction. Tax them too much, attack them for being wealthy, and they just may not show up anymore. In fact, they might start drinking overseas, where the atmosphere is somewhat friendlier.