The above video is from Bernard Salt's presentation at the 2011 Property Council of Australia's 'Geared for Growth' Congress recently held in Darwin. In the presentation he calls for the construction, property and banking sectors to combine forces to fund a lobby group to infiltrate social media, and blogs in particular, to counter the negative sentiment that is leading property markets into the doldrums.

Astonishing. As fellow blogger Tony Harris notes in his detailed analysis of the video -

Who are you really chatting with, when you post on that property forum or blog? A regular person like yourself, or a paid spruiker, funded by the real estate industry?

Around the 8 minute mark Salt discusses the hostile reception to an article he published online spruiking the virtues of growth (population growth I assume). He had this to say about the reader comments -


Not one person in 230 put a reasoned, balanced, measured counter-response. I want to see someone actually in there. Every time you don't respond, negative sentiment extends just that bit further across middle Australia.

I want to see someone, somebody, some group of people, counter the negativism in all theatres, social media, twitter, the blogosphere, seek out and, not destroy, seek out and balance every extreme view - take the fight to them. Sitting back is not an option. I do understand that individuals cannot do this, but surely there is a way to fund a group to do it on your behalf. This it not a pitch for me, but I am surely happy to advise on how to set it up. 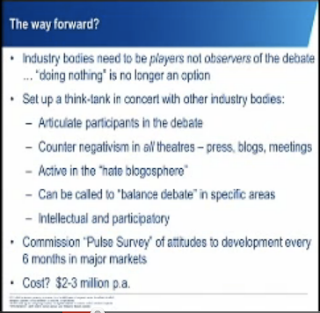 What is ironic, to me, is that the property and construction industry lobby groups might actually go for Salt's big idea, as if a few blog comments and Facebook pokes can stop Australia following the rest of the world to its economic destiny.

Salt suggests perhaps they need an (another) 'independent' pro-growth, pro-development sentiment-generating lobby group which could be funded by the BCA, the Property Council of Australian and of all things, the Australian Bankers Association.

The banks would probably join because of the negative sentiment towards them at the moment. Salt comments -

The idea that banks should not get a fair return on their investment is bizarre. We've got this disconnect in Australia between the way we want to live, our superannuation, and our objection to every development, to anyone making a profit.

I for one can understand the concern over bank profits. After all, bank executives and shareholders seem happy to take the profits while taxpayers insure the losses. All the while they have played a key role in the property bubble with their declining lending standards.

Face it Bernard, you can't stop the realities of economics and finance by tweeting 140 characters or less.

And speaking of the realities of economics and finance, that national house price slide accelerated in July according to Rismark.  Note that in Perth and Brisbane prices have been falling for more than 12 months, so the falls from peak are much higher than these figures show.  From my reading of old data I could guess that Brisbane prices are down about 11% over 15months. 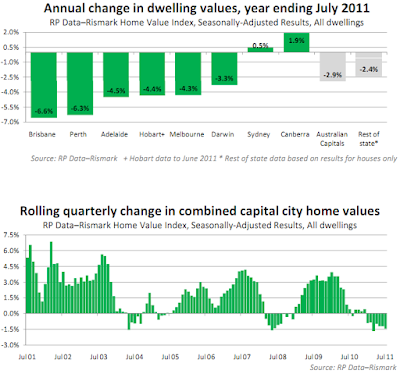 Coinciding with their press release was the most bizarre property analysis yet from Rismark data guru Chris Joye. Joye's analysis of late has been squarely aimed at providing evidence that current house prices are supported by 'economic fundamentals', including the once-off adjustment in interest rates, higher household incomes, and so on.

This time he mightily proclaims to-

... show that by indexing up median Australian dwelling prices by per capita disposable incomes and changes in borrowing capacity (as determined by mortgage rates) one can account for around 90 per cent of the rise in Australian housing costs over the last two and a half decades

Which I guess is a roundabout way of saying prices are 10% overvalued at most. Joye presents the following graph to demonstrate his result, but I can't help wondering why he chose 1986 as a start date. Had he chosen 1990 as the start date he could have shown that houses are undervalued according to his fundamentals, but had he chosen 1998 as his start date, his fundamentals would have only explained about 50% of the house price. Most bizarre. 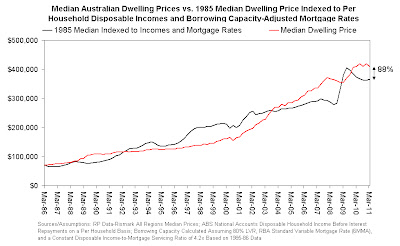 As I have said before, yes lower interest rates and higher incomes do explain some of the growth, but only about 70% of today's prices.  There is also always the risk that incomes will fall as house prices fall, but always the chance that mortgage interest rates will drop to slow any accelerated price declines.  The downside risks are far greater than any upside potential in the housing market at the moment, and I do wonder why Chris seems so keen to give the impression that this is not the case.

In other housing news today, Leith van Onselen from the Macrobears superblog [just kidding guys ;-)] has explained in detail in this SMH article why the RBA appears to underplay the risks, and underestimate the size of, the bubble in the Australian housing market. Simply, they use a measure of average household income about 33% higher than actual household incomes. Who would have guessed that the average household disposable income was actually $74,360, and the median just $60,580 - not the $100,000+ used in the RBA's analysis? Not the RBA it seems. Oops.

Finally, I stumbled across this article (somewhat belatedly) arguing essentially that housing supply is driven by housing turnover, and is completely unrelated to price. This might come as a shock to the 'elastify the supply side' believers.  It is also odd that mostly valuers and honest property developers seem to be the few groups who argue this concept.

Let me give a few practical examples – First, imagine the construction of a residential unit block – the developer, because of cash flow or financier requirements, needs to sell a large proportion of the development “off-the-plan”.

Simply, until pre-completion sales are locked away nothing gets built.

Second example - for house and land packages in new estates, buyers purchase the block of land first and arrange the construction afterwards. In either case there is no “build it and they will come”. It is the demand that sets the pace.

Which is what I have tried to say for some time, and said back in April like this -

The rate of land and housing supply is determined by the rate of sales of new stock (known as the absorption rate). It has nothing to do with the rate of development approvals or even the price level.
Email ThisBlogThis!Share to TwitterShare to FacebookShare to Pinterest