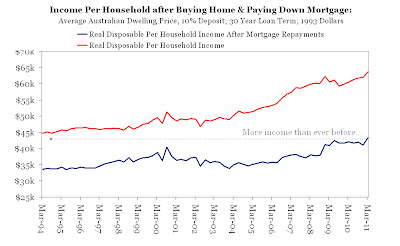 Housing market data provider Chris Joye has written a great deal of analysis on Australian housing recently. However his latest graph (above), showing households have more money left over after buying the average home today than any time since 1994, is very confusing.

He explains the data and method as follows.

We decided to simply look at the "average household"--calculated by dividing the ABS's quarterly disposable national income estimate by the number of households each quarter--buying the "average dwelling" in Australia, which is defined as the average sales price in a quarter.

And he explains the findings

Like the RBA, we find that--contrary to popular myth--today's households actually have more disposable income than at any other point since we began our analysis in 1993.

Even Joye’s own graph shows that home buying households were worse off between 2000 and 2009, because any income growth was more than offset by the cost of homes. It also shows that home buying households in 2004 were no better off than in 1994. In fact, if this analysis was undertaken any time prior to 2009 the popular myth would be shown to be true.

I also have some other concerns:

1. The income measure in the national accounts is 57% higher than measured by the survey of Survey of Income and Housing Costs (SIHC) and does not reflect actual household income (see here)

2. The outcome does not pass the common sense test. $43,000 of disposable income left over after mortgage payments, in 1993 dollars, is actually $73,350 in 2011 dollars. This seems like a lot of disposable income for the average household to have left over considering the national median dwelling at $418,000 dollars and the associated mortgage cost of $35,000 per annum. These figures therefore assume that $113,000 after tax is the average household income. This makes no sense to me. You need to have one income of approx $170,000 or two incomes of around $75,000 to meet this income level – that is FAR above average.

3. The outcome appears inconsistent with previous data. For example, mortgage rates in 1998/99 were a little over 6% (compared with a little over 7% today), and prices were about 60% lower than today, according to Joye’s own recent published graphs.

4. The graph shows that mortgage repayments have gone from 25% to 32% of the average household income over the period (which is consistent with Steve Keen’s observations – second graph). To get back to 25% of average income, prices need to fall 20%, or mortgage interest rates drop below 5%. 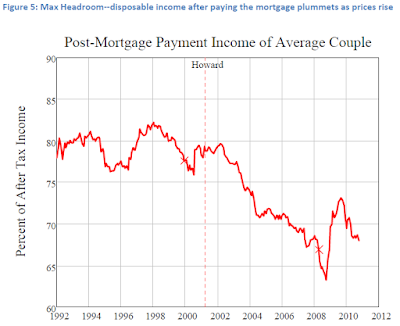 5. The graph, probably unintentionally, shows that incomes grew 40% in real terms over the period, but after housing costs, they only grew 26% (with most of that growth the past 4 years).

6. Indeed, the 2008 and 2011 blips show that when prices fall home buying households are BETTER OFF. The same applies to interest rates.

I sincerely hope this type of analysis is not interpreted as a reason for house prices to rise and I hope nobody leverages into the housing market because of it without properly understanding the risk they are taking.
Email ThisBlogThis!Share to TwitterShare to FacebookShare to Pinterest