Economies of scale do not equal productivity 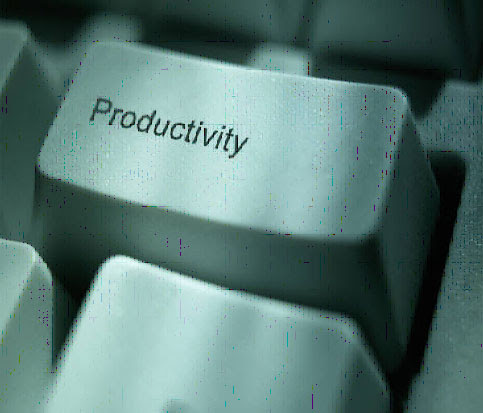 Only three things matter in the Australian economy - productivity (how much each person produces); employment (how many people are producing); and equality (how that output is shared). All the other random shrapnel of economic news that flies around is kind of irrelevant.

Productivity is the key to greater wealth, as an individual, a nation, and a world. Productivity is doing more with less. It is that simple. Unfortunately people often equate productivity with economies of scale and population growth, which leads to a poor understanding how economic growth really occurs.

If a farmer selectively breeds his crop so that the next generation of plants yield 5% more grain, with no further inputs required (no more water, fertiliser, harvesting time etc), then he has made a 5% productivity improvement. The output in terms of grain is 5% higher for the same inputs.

Productivity gains flow through the economy, allowing us to produce more goods over time. When other farmers follow this lead, we find that marginal land can now be used productively. We find that fewer people need to work in agriculture, because each farmer is producing more food. This frees up labour to be employed elsewhere in the economy, producing other goods to satisfy our desires.

A second way that productivity improves is through economies of scale. Even in the absence of new technology or innovation, we can produce more output with less input by specialisation of labour, and larger and more efficient capital equipment, to achieve economies of scale.

However, people often get the drivers of productivity confused. They believe economies of scale are the main driver, and innovation is some secondary consideration. But in fact, economies of scale are only sometimes productivity enhancing. Often there are diseconomies of scale, where there is a trade-off between the size of the economy, and the efficiency of the economy. This occurs when the marginal cost of production is higher than the average cost (which is bizarrely where economists believe production usually exists on the cost curve except in the case of a natural monopoly).

For example, urban water supply can initially be produced very cheaply with a network of local dams. However, once local water needs exceed this amount, another source must be found. In Brisbane and Melbourne, this source is desalinised sea water, which is far more costly than any other water. What this means is that the cost of the last batch of water from the desalination plant (the marginal cost) is far higher than the existing average cost of water to the city, which increases the average cost and makes all water more expensive. Businesses that use water will pay more, and that leaves them less able to increase production and invest in their own innovative capital. Households pay more for water, leaving them less income to spend on other goods. We are all worse off, and far less productive, due to this diseconomy of scale in water supply.

There are many other examples from roads, to electricity, to housing.

Another popular view is that there is a connection between the population of a city or country, economies of scale, and productivity - if we don’t have more people, we can’t get the economies of scale necessary to become more productive.

Yet the great problem with this view is that economies of scale do not rely on the population of the geographical area where goods are produced, but on the size of the market being satisfied by that production. This is why German car manufactures in a single Länder (state), with a population of perhaps 10 million, can achieve greater economies of scale than many other manufactures because they supply a global market with a high volume of vehicles. More people in these Länders will do nothing to make these auto firms more productive, and may likely achieve the opposite effect if the required expansion of the housing stock, roads and other infrastructure, competes for labour demand and finance with the car manufactures.

Even if population growth means that expansion of some of our capital stock occurs where economies of scale exist, there is always the need to expand the housing stock – a capital good where economies of scale do not readily exist. Duplicating any capital in this nature comes at a cost to society that can never be recovered. Read more on that here.

The below Venn diagram shows the relationship between these factors and productivity. As you can see, innovation in new production technology is the primary driver, with economies of scale sometime being beneficial for productivity, and population growth usually coming at a cost to productivity. 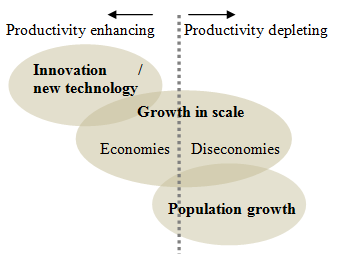 The implication then is for government especially to be aware of when expansion of publicly funded capital is approaching diseconomies of scale and recognise this cost to society. Why stimulate population growth when it comes at a cost to the existing population in the form of more expensive water, transport, and the diversion of resources from genuine productive investment?
Email ThisBlogThis!Share to TwitterShare to FacebookShare to Pinterest