As I alluded to in recent posts, Australian banks reliance on foreign funding has lead to the alarming situation whereby we (as a nation of households) have borrowed from the rest of the world to buy existing houses from each other at inflated prices. As I said, “it makes me quite frustrated to even suggest that a fair portion of foreign debt incurred in the past decade was used to pay each other higher prices for existing houses”.

I made that claim without evidence – it was an intuitive interpretation of the data in the balance of payments and in particular, the interest payments heading abroad in the primary income account. But, in the interests of an informed debate, I have digested some of the literature on this matter and found that the intuitive principle is well supported.

In February this year, Andrea Ferrero, of the Federal Reserve Bank of New York, published this paper arguing that “a progressive relaxation of borrowing constraints can generate a strong negative correlation between house prices and the current account. Households increase their leverage borrowing from the rest of the world so that the current account turns negative”.

The following plot is from the paper (p2). 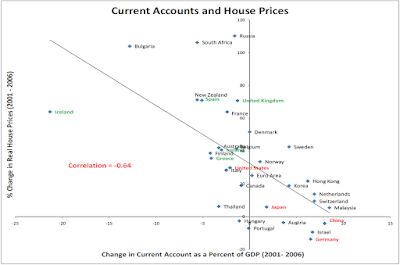 The model demonstrates the mechanism by which relaxed lending standards decreases domestic saving, increases foreign bowings and decreases the current account. The model also shows that prices vastly overshoot the new equilibrium point. The quote below is from p14 (my emphasis).

The key shock that generates a house price boom and a contemporaneous current account deficit in the model below is a reduction in the parameter that measures the loan-to-value requirement. At a broad level, lower collateral requirements capture easier access to credit for housing finance.
...
The main experiment consists of shocking the collateral constraint parameter. In particular, financial innovation corresponds to a higher loan-to-value ratio.
...
At a very basic level, the model captures the negative correlation between house prices and current account balance. In response to the shock [relaxation of collateral criteria], house prices persistently increase while the current account worsens, at least for a couple of periods, before slightly overshooting its long run average of zero. A more realistic sequence of shocks approximating a progressive relaxation of collateral constraints (the process of financial liberalization) is likely to generate a run-up of house prices and a deterioration of the external balance more in line with what observed in the data.

This appears to support the idea that simply constraining lending criteria would have been an effective measure to contain house prices, and reduce the current account deficit. Steve Keen would not be surprised.

Indeed, the evidence of this relationship appears quite strong, and it is easy enough to find other articles supporting this argument empirically.

My main criticism is the timing of the house price growth measure. China for example appears to have flat real price growth in the above graph for the period 2001-2006. That would seem consistent with the arguments surrounding the relationship between the current account and house prices. However, since that time credit standards in China were reduced, prices shot up (around 2007), then access to credit was subsequently tightened, and prices flattened (around 2008). To me, a good experiment to demonstrate this relationship, although hampered by global conditions at the time. The below graph from The Economist house price comparison tool shows China’s house price growth in this period was far below that of the US, UK and Australia. More recent data shows strong house price growth since 2009. 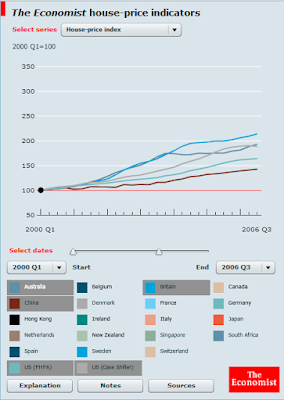 One stand out example of where the relationship  between house prices and the current account fails is Japan in the 1980s.  A housing bubble coupled with a current account surplus and a large growth in ownership of foreign assets is not what these models predict.

Out of interest, here is a list of countries according to their current account balance. Eyeballing this list it is pretty easy to find the prominent housing bubble markets near the bottom.

To be clear, the access to credit is the key (and this may provide the explaination of the Japanese experience in the 1980s). Lower LVRs force domestic saving and limit the need for foreign borrowing, meaning asset prices can reflect the economic reality of that country alone. (One might argue that Japanese saving was high enough that the current account was simply lower tha it woul dhave otherwise been, but not negative.)

I will present one final conclusion from here, with my emphasis.

We find robust and strong positive association between current account deficits and the appreciation of the real estate prices/(GDP deflator).

Our results are consistent with the notion that for all countries, current account deficits are associated with sizeable appreciation of the real estate. This effect holds controlling for the real interest rate, GDP growth, inflation, and other conditioning variables. We also find evidence consistent with the growing globalization of national real estate markets. These findings are consistent with various scenarios explaining patterns of capital flows across countries, including differential productivity trends and varying saving patterns. In the absence of pre-existing distortions, financial inflows are unambiguously welfare improving. Yet, in a second-best environment, public finance considerations imply that inflows of capital may magnify distorted activities, increasing thereby the ultimate costs of these distortions. Arguable, the experience of emerging markets in the aftermath of financial liberalization during the 1990s illustrated these concerns. Needless to say, this second-best assertion is not as argument against financial integration, but a cautionary tale – greater financial globalization implies the need to be more asserting in dealing with moral hazard and other pre-existing domestic conditions. (p20)
Email ThisBlogThis!Share to TwitterShare to FacebookShare to Pinterest