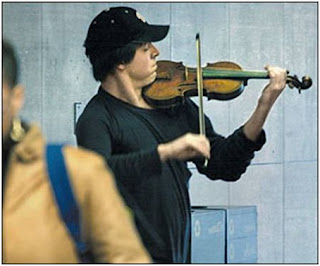 No borders?
Imagine there's no countries
It isn't hard to do
Nothing to kill or die for

In the spirit of John Lennon, what would happen if all countries started a free worker mobility agreement? Where would people leave, and where would their destinations be? Would the world be better off on average? Would it solve many conflicts?

Population arguments
Land is an asset. As the industry would say, they aren’t making any more of it. But shares are also an asset, and most companies aren't make any more shares. So does population growth increase share prices as well? After all, there would be more people competing for the same number of shares?

Mere monkeys?
Monkeys trained to use money for transactions (from here)

The essential idea was to give a monkey a dollar and see what it did with it. The currency Chen settled on was a silver disc, one inch in diameter, with a hole in the middle -- ''kind of like Chinese money,'' he says. It took several months of rudimentary repetition to teach the monkeys that these tokens were valuable as a means of exchange for a treat and would be similarly valuable the next day. Having gained that understanding, a capuchin would then be presented with 12 tokens on a tray and have to decide how many to surrender for, say, Jell-O cubes versus grapes. This first step allowed each capuchin to reveal its preferences and to grasp the concept of budgeting.

Then Chen introduced price shocks and wealth shocks. If, for instance, the price of Jell-O fell (two cubes instead of one per token), would the capuchin buy more Jell-O and fewer grapes? The capuchins responded rationally to tests like this -- that is, they responded the way most readers of The Times would respond. In economist-speak, the capuchins adhered to the rules of utility maximization and price theory: when the price of something falls, people tend to buy more of it....

During the chaos in the monkey cage, Chen saw something out of the corner of his eye that he would later try to play down but in his heart of hearts he knew to be true. What he witnessed was probably the first observed exchange of money for sex in the history of monkeykind. (Further proof that the monkeys truly understood money: the monkey who was paid for sex immediately traded the token in for a grape.)

Young property buyers making smart property decisions
Apparently, one in ten home buyers ‘rent to invest’. They choose to rent their principle place of residence, and invest in property elsewhere. This makes perfect sense, and I have commented before why this is always the best way to get financial exposure to the property market – far better than buying to occupy. It is what I’ve always done.

What we learn from this exercise is that buying your own home in today's economy is far inferior to buying a home as an investment, or renting and staying out of the property market completely

People are terrible at objectively determining quality
In Washington , DC , at a Metro Station, on a cold January morning in 2007, this man (image above) with a violin played six Bach pieces. During that time, approximately 2,000 people went through the station, most of them on their way to work. After 45 minutes only 6 people had stopped and listened for a short while. About 20 gave money but continued to walk at their normal pace. The man collected a total of $32. When he finished playing no one noticed and no one applauded. There was no recognition at all.

No one knew this, but the violinist was Joshua Bell, one of the greatest musicians in the world. He played one of the most intricate pieces ever written, with a violin worth $3.5 million dollars. Two days before, Joshua Bell sold out a theater in Boston where the seats averaged $100 each to sit and listen to him play the same music.
Email ThisBlogThis!Share to TwitterShare to FacebookShare to Pinterest