Sydney is different. Since 2003 rents have risen faster than prices. I imagine the rest of the country would find that hard to believe, given their experience. But this is just one piece of evidence to show that the property cycles in Australian cities are nonsynchronous.

The past twenty-five years of data show that the Sydney residential property market is the least volatile, and is always first to boom. In fact, you can chase the price growth ripples from Sydney and Melbourne across the country – to Adelaide, Brisbane, Perth then Darwin. This might be one reason that such divergent opinions exist in the media, academic and professional circles. 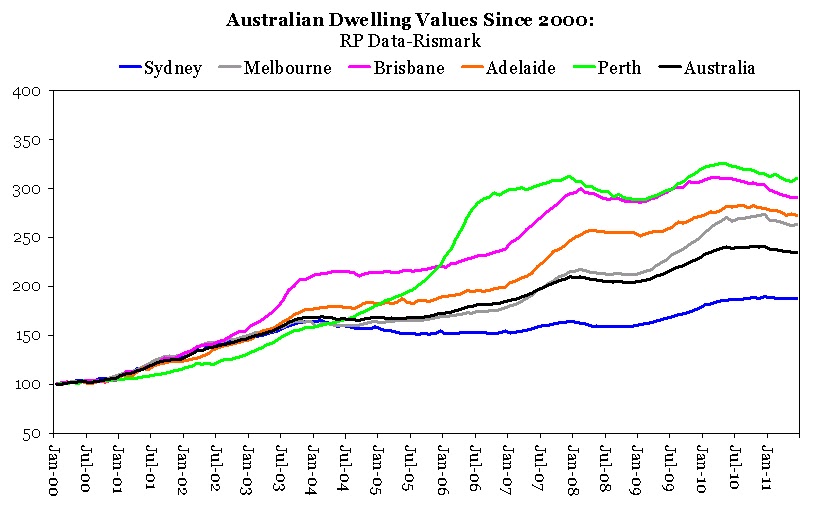 If we looked only at the above graph, we would note that the two biggest markets, and arguably most attractive cities, have had the least growth since 2000. That seems particularly counterintuitive.

But if we look long-term the explanation is clear – Sydney and Melbourne had their major boom years before the other cities in the late 1990s.

Each of the charts that follow this post compare the timing of booms in capital cities against Sydney’s booms. The blue background shading matches the Sydney boom periods, with the red shading the boom periods of comparison cities. This exercise reveals a number of things.

This might have lessons for property investors outside of Sydney. If you are in Brisbane, Perth or Adelaide and follow the Sydney trend a couple of years behind, you will do well. If prices are flat in the major capitals, take your money to Darwin.

What about from 2011 on? Sydney appears below its long term trend, and it rarely drops far below this trend. The other capitals are above their trend and do fall quite far below trend during economic downturns. My personal view is that Sydney stability will continue.

The other question to ponder is the trends in this period could validly be applied from now on. Deleveraging is the most important new consideration, and we have seen the dramatic affects this can have on asset values if we simply look to the US and some European property markets.

My expectation is that prices will fall until such time as yields are high enough to be attractive to investors who aren’t expecting capital gains in the near future. To me, this might mean yields might get higher, relative to interest rates, than we have seen for 30 years. And for that to happen, prices will fall. Of course, if the RBA drops rates significantly, this will dampen falls, but I doubt lead to the market grinding out modest growth (ie. matching inflation) for a couple more years yet.