So to follow up, I have produced a graph of real pre capita trends in retail spending on a log scale to give, what I believe, is the best picture of retail spending patterns over time.  The per capita element is not necessary from an industry perspective, as total turnover drives the health of the industry no matter who spends it. But from a household spending perspective it is revealing.

The peak of this real per capita index is Dec 2007 (dotted line), and is down about 0.35% since that peak.  You could say that each persons retail spending has been flat for three and a half years after more than two decades of consistent growth.  In the decade prior to this peak per capita real growth in retail was 3.5%pa.

From an industry perspective, real turnover has grown at 1.7%pa since that peak, whereas in the decade prior, real total turnover grew at 4.9%pa.  This is clearly quite a shock to the sector, and I hope it stimulates some overdue competition and innovation in retailing in this country (as I have previously discussed). 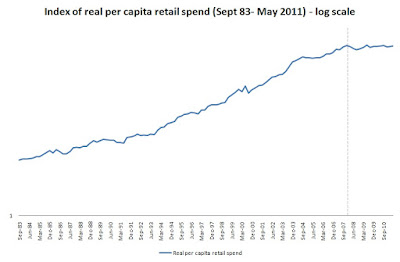