Since the higher than expected CPI print last Wednesday, the economic blogosphere has flooded our screens with opinions on the likely RBA decision at its board meeting tomorrow. Some have argued that the CPI was filled with ‘once-off’ movements in price (eg, the deposit and loan facilities and some fruits) and should therefore be taken with a grain of salt. Others have argued that the CPI is clear evidence that the RBA should move on interest rates to get ahead of the inflation curve.

I have a different opinion.

Raising the cash rate while Australia could be in a technical recession is a situation the RBA needs to avoid more than anything else. Think about the criticisms – “How could our central bank be so out of touch?” “Give Glenn the boot!” The very institution itself would be at risk. Forget demonstrating independence. Self preservation is the name of the game (note also that the inflation target is not a mandate of the RBA, but its own interpretation of how to fulfil is statutory role).

Therefore, the only logical decision for the RBA board tomorrow is to leave the cash rate unchanged, even if it has strong concerns about inflation. It is the same action central banks are taking in the UK and other developed countries in similar situations.

But there is more to this story. The present bout of high inflation and low growth is global, and there is little our domestic policy can do to intervene. Further, I suspect that this has much to do with physical constraints to global oil supply (at least in the short term).

As I said two years ago during the financial crisis –

...some interesting trends should occur in the next year or two. First, we should see the price of oil rise again from its current price of around $60 a barrel. Second, we should see an increase in the inflation rate on a relatively global scale. (Note that in the UK, inflation is currently at 4.4%. With the base interest rate at 4.5%, the real interest rate is now effectively zero). Third, we will see a sustained decline in global output. Taken together, a recipe for stagflation. (I also predict continued volatility on financial markets as demand and supply expectations feed back on each other).

The following three graphs show the oil production, oil price and the correlation between oil price and inflation in Australian, Asia, and other developed markets (DM). (Thanks Ricardian Ambivalence for the third graph). 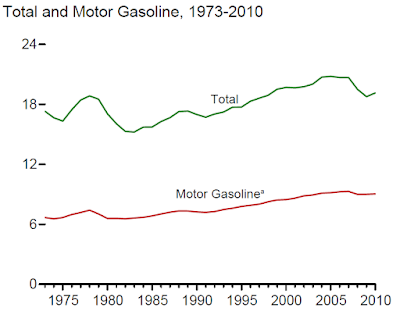 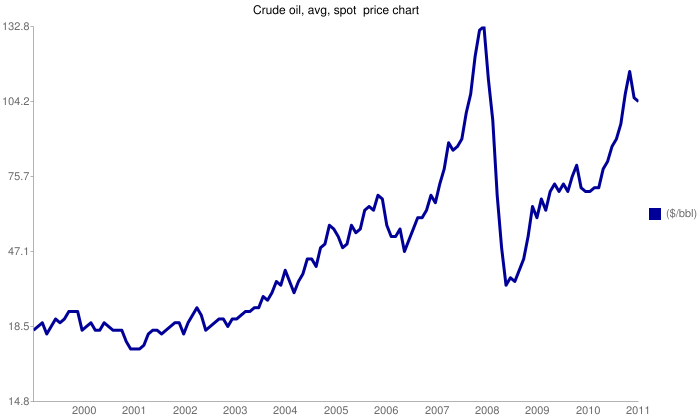 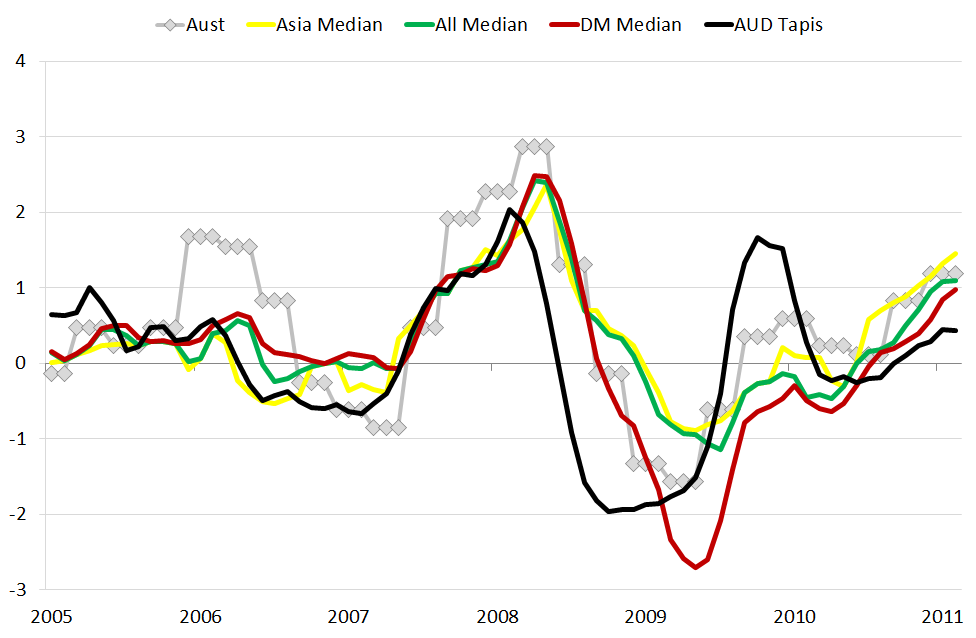 The simple explanation for oil price led inflation is that a century of capital equipment, particularly in transport, is reliant on oil, has very little ability to substitute to other energy sources.  Therefore, the cost of goods is at the mercy of the oil price due to our invested capital.

Typically, there is an expectation oil production will respond to higher prices. But if there are short term physical and technological limitations, this cannot occur. In 2007 the oil price was double the price in 2005, yet total global oil production was identical. If there was not a physical limit to oil production, oil producers should have responded to this price by greatly increasing supply.

Ricardian Ambivalence has weighed in with an opinion that global inflation is not about oil. Oil price leading inflation globally in the above graph is explained away because “Oil leads CPI, in part, because variations in demand lead variations in CPI”. There may be some element of demand and oil price as co-contributors to price volatility, but my suspicion is that physical production limits to oil are the key.

Indeed, the reason these limits are having such a dramatic effect is because they were not foreseen, and investment decisions were made on the expectation of higher volumes of oil available at similar prices.

As a final statement, I want to address the ‘lunacy’ of peak oil. Many economic thinkers rule out the possibility of such an occurrence, as high prices lead to more inaccessible reserves becoming viable, as well as substitute energy sources becoming economical. Yet the recent evidence is that global oil production is back where it was in the late 1990s even though the oil price is more than 5x higher. This doesn’t seem consistent with the economic rationalism, which ignores the major prolonged adjustments necessary for these investments and subsitutions to occur.

Some may still be arguing in their mind that the reason for lower oil production currently is because of a global demand slump. But again, this fails to explain why we are willing to pay 5x the price for oil, and producers are not willing to sell any more oil at that price.

In the end, Australia is at the mercy of global forces as much as anyone, and it would be foolish for the RBA to believe that our domestic interest rate will have any significant effect on inflation without crushing our economy.
Email ThisBlogThis!Share to TwitterShare to FacebookShare to Pinterest