Is Australia a net food importer?

Measuring food is difficult. Do we use kilograms, or calories?

I’ve covered the value of food security before.  But the obvious truth that Australia is a massive exporter of food, in terms of both kilograms and calories, does not stand in the way of the grocery lobby group, the Australian Food and Grocery Council (and yes, I am very late to this story).

Here are some examples


This alarming result shows food and grocery manufacturing – which employs 288,000 people – is now a net-importer of food and grocery products which impacts industry’s growth and competitiveness (here)

But Ross Gittins' b%&*$it detector was straight on to it


According to figures compiled by the Department of Foreign Affairs and Trade, last year we had total exports of food of $25.4 billion and total food imports of $11 billion, leaving us with a surplus of $14.4 billion. Even if we ignore unprocessed and look only at processed food, we still had a trade surplus of $5.8 billion. (here)

He continues to pick apart the claims.


So how did the food and grocery council get exports of $21.5 billion and imports of $23.3 billion for 2009-10, giving that deficit of $1.8 billion? By using its own definition of ''food and groceries''. We're not talking about farmers here, but the people who take their produce and process it for supermarkets.

So the council's figures exclude all our unprocessed food exports, including wheat (worth $4.8 billion in 2009), other grains and live animals. On the other hand, they include ''grocery manufacturing products'' such as medicines and pharmaceuticals, plastic bags and film, paper products and detergents.

That's food? It turns out that our exports of ''groceries'' totalled $4.9 billion in 2009-10, whereas our imports totalled $12.9 billion, leaving us a ''grocery'' trade deficit of $8 billion. This is hardly surprising. Since when was Australia big in the manufacture of medicines? If you leave out groceries, the report's figures show we had exports of processed food and beverages worth $15.9 billion, compared with imports of $9.9 billion, plus exports of fresh produce worth $700 million against imports of less than $500 million.

That leaves us with a trade surplus of $6.2 billion for fresh and processed food and beverages. We've been conned.

The graph below is a final reminder about our food net export position relative to other nations, and our relatively low direct agricultural subsidies. 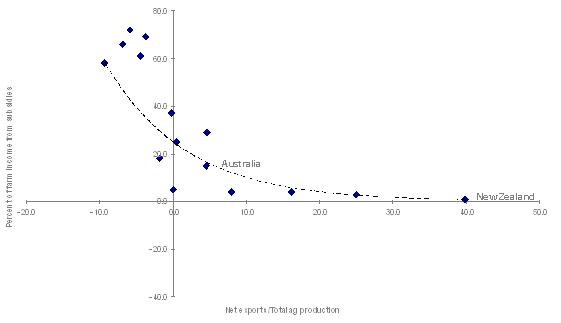