There is a meme floating around which has its origins in Chris Joye's numerous articles on the Australian housing market. While I often challenge Joye's economic arguments on this blog, I hope that readers realise this is simply part of a rigorous intellectual debate, and not a personal attack. Indeed, I admire his quest to provide better housing data, and agree with quite a few of his economic and political beliefs.

The meme is that the surge in debt levels and the price of Australian homes since the late 1990s was a once off adjustment to a period of low interest rates and inflation. Therefore, if these conditions hold, current prices are sustainable.

The period from the early 1990s to the mid 2000s was characterised by a drawn-out, but one-time, adjustment to a set of powerful forces. Households started the period with relatively little leverage, in large part a legacy of the effect of very high nominal interest rates in the long period of high inflation. But then, inflation and interest rates came down to generational lows. Financial liberalisation and innovation increased the availability of credit. And reasonably stable economic conditions – part of the so-called ‘great moderation’ internationally – made a certain higher degree of leverage seem safe. The result was a lengthy period of rising household leverage, rising housing prices, high levels of confidence, a strong sense of generally rising prosperity, declining saving from current income and strong growth in consumption. (here)

This was a once-off "level-effect" (ie, sustainable adjustment reflecting the huge reduction in the cost of debt), not a permanent growth effect, and now these ratios are flat-lining. This is why the household debt-to-disposable income ratio, as shown below, has gone sideways since 2005, years before the GFC first materialised. That is, credit has been tracking incomes, as you would expect.

The household debt to disposable income graph is below, as is a graph demonstrating the structural adjustment of interest rates. 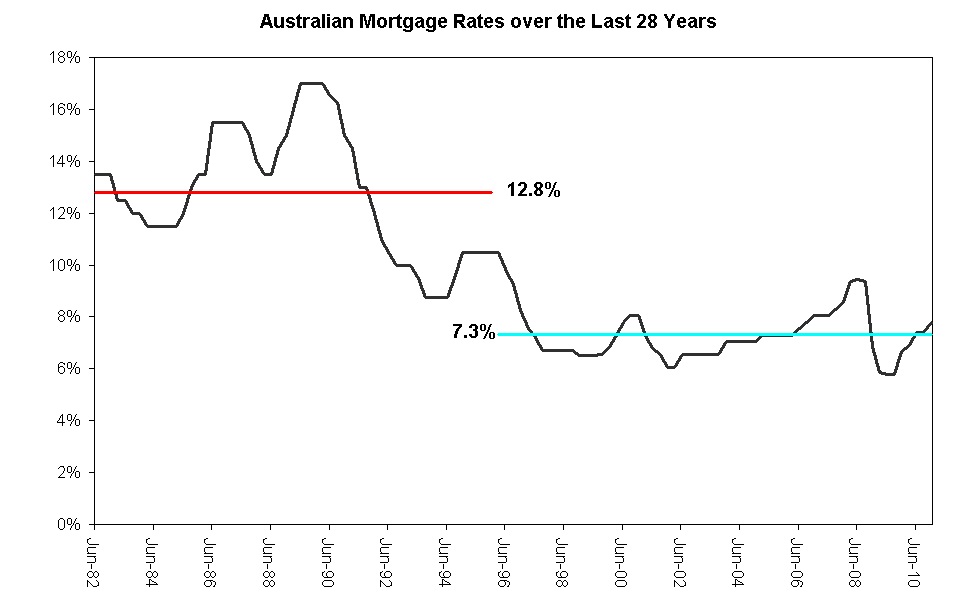 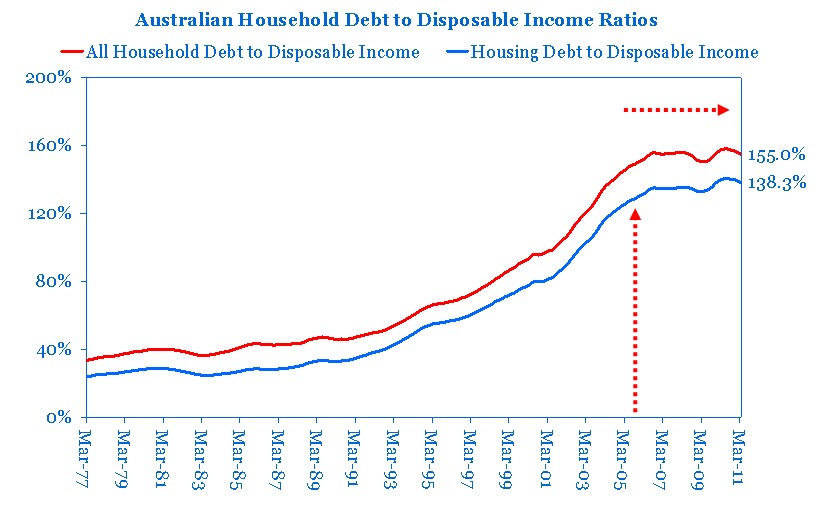 What makes this meme powerful is its truth. Australian interest rates did see a structural adjustment in the mid 1990s. There is also no denying that lower interest rates should lead to asset values rising relative to other prices in the economy. It also makes sense that the level of debt able to be sustainably managed, as a portion of incomes, is greater.

In the housing context, the 'once-off adjustment' argument can be demonstrated as follows.

The same calculation can be made against household income, where for a fixed percentage of incomes, a 75% greater price, and level of debt, can be sustained.

Unfortunately, this logical argument only accounts for a part of the debt build up and house price growth since the mid 1990s. The RBA graphs of household finances and real house prices (below) show clearly why this is the case. 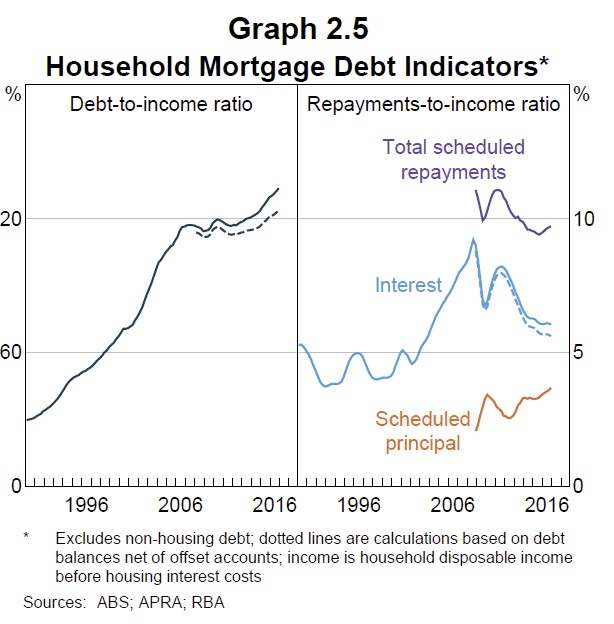 The graph of interest paid as a proportion of disposable income shows that the actual cost of debt relative to incomes has doubled (4% to 8%) since the mid 1990s. This is clear evidence that much of the debt binge, and the subsequent house price inflation, is not attributable to the 'once-off adjustment'. This adjustment would only account for the amount of debt, and home prices, that could be supported with interest costs of 4-5% of household incomes - not 8%.

The RBA also shows that real home prices have more than doubled (100% growth) since the mid 1990s to 2007, rather than seeing 75% real gains. Indeed the 2009 boom saw real home prices inch up again (with some subsequent falls in real terms).

The ABS home price figures (though not ideal for this purpose) suggest that real home prices gained approximately 150% since 1996. That's twice what is expected from interest rate conditions alone.

To get back to that 'sustainable' point, either home prices need to fall by around 30%, or interest rates need to fall by 30% (mortgage rates to 4-5%), or some combination of the two (noting also the geographical disparity any correction is likely to have). With today's CPI print surprising many on the high side, the market prediction (and mine) of rate cuts by year's end seems far less likely.  The negatively geared housing investor should take note.

In all, the meme is powerful because it is true, but dangerous because alone it is an incomplete explanation of debt and home price trends of the past two decades. What appears clear from the data is that we have overshot the expected price and debt adjustment due to the changing interest rate environment. With this in mind, the downside risks for property values appear to far outweigh any upside potential.
Email ThisBlogThis!Share to TwitterShare to FacebookShare to Pinterest