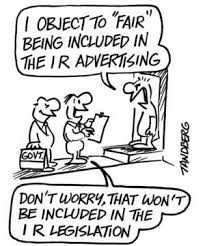 Cannon's Law says that if it will work, then the government won't do it. If regulation would really bite, the regulated parties will work the political system to kill it. (here)

With so many simple effective regulatory reforms that would greatly enhance economic efficiency being constantly overlooked, this spoof law resonates with my experiences. It is particularly relevant to the mining tax, the carbon tax, and other reforms currently being considered (even to the Greek debt situation).

The point is that economists often oversimplify policy matters. They consider government decisions is isolation of the interaction between affected parties and politicians. Remember, most policy changes involve winners and losers, and the relative political clout of each group can determine the actual outcomes.

The more effective the regulation in achieving outcomes for the public good, the less likely the regulation will be appropriately implemented due to the increased likelihood of regulatory capture.

For those not familiar with regulatory capture, the following definition might be useful.

For public choice theorists, regulatory capture occurs because groups or individuals with a high-stakes interest in the outcome of policy or regulatory decisions can be expected to focus their resources and energies in attempting to gain the policy outcomes they prefer, while members of the public, each with only a tiny individual stake in the outcome, will ignore it altogether.[1]

Regulatory capture refers to when this imbalance of focused resources devoted to a particular policy outcome is successful at "capturing" influence with the staff or commission members of the regulatory agency, so that the preferred policy outcomes of the special interest are implemented.

Regulatory capture does not have to involve intentional ‘ship jumping’ by agencies. The simple fact that you are spending a lot of time talking to the industry you regulate makes you identify with that industry.

For example, the agency who is charged with regulating the amount of water available to be used in each river system would talk with farmers quite a bit. They would begin to think that they are in the ‘water business’ rather than the ‘protect the public interest’ business, thus subtly shifting their subconscious focus.

To be clear, there are two key political realities that economists usually overlook.

In the end, perhaps our political leaders are not as powerful as we think. Our democracy appears to have a secondary feedback loop between politicians and interest groups that chugs along behind the main cycle of politicians reporting to the people at the ballot box. The power rests with the people and the alliances we form in business and social practices.

Perhaps the power is distributed unevenly due to the differences in wealth between groups.  And maybe there are simple ways around that, like capping and declaring political donations.  Or maybe this wealth difference is not so important - even big business needs to keep customers happy.

Maybe these thoughts are no surprise to you. But it is nice to lay it all out and ponder our own positions is this social game.
Email ThisBlogThis!Share to TwitterShare to FacebookShare to Pinterest