People and governments love to simplify problems to a single issue - Speed kills, Helmets save lives, Stop the boats. It helps them appear to be ‘doing something’. But real life is not so simple.

Take alcohol. While heavy drinking has long been acknowledged as being socially disruptive, more recently, the fight against alcoholism has been partly driven by arguments around health impacts.  Yet their are both positve and negative health effects from alcohol, and the positive effects are usually overlooked.  The unintended consequences of policy are also rarely considered.

The alco-pops tax was one measure aimed at curbing binge drinking, but it was a fizzer. Sales of other alcoholic beverages increased significantly, offsetting much of the claimed benefits of the tax.

Additionally, no one considered that more expensive alcohol might encourage binge drinking at the expense of casual drinking. If your preferred alcohol is more expensive, there is less incentive to drink in a casual setting where you don’t end up drunk. Why spend the extra money on alcohol unless your intention is to get drunk?

It’s a thought that has crossed my mind when considering the drinking patterns around the world. Those countries with the most expensive alcohol, usually due to alcohol taxes, usually have the most extreme binge drinking culture (that's been my personal observation, and I have no hard evidence to back up the claim).

But alas, these considerations are a little too real for the average policy maker to consider.

Due to the different ways that alcohol can affect people, there is no amount of alcohol that can be said to be safe for everyone. People choosing to drink must realise that there will always be some risk to their health and social well-being.

But alas, the evidence seems to strongly contradict this simplified message (although the alcohol consumption guidelines are a little more generous).

The overwhelming conclusion from large scale longitudinal studies is that moderate drinking improves longevity. The graph below illustrates. 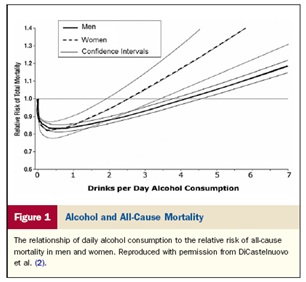 Men who never drink are just as likely to live as long as men who average 4 drinks per day, with those who drink about one drink per day (or 7 per week) likely to live longest.

The results are partly attributed to the social interactions that are associated with alcohol consumption.

Somewhat surprisingly there are no other plausible explanations at hand that I know of. The debate appears stuck on the ‘is this relationship real’ stage, without moving on to considering why it might be real.

So here is a suggestion.

Often our body has systems that work on a use-it-or-lose-it basis. We use muscles, they grow. We don’t, they atrophy. Our bodies have a built in system (ethanol metabolism) to break down alcohol. Perhaps the very act of digesting of excess alcohol keeps the system healthy for longer.

As my good friend Wikipedia says

If the body had no mechanism for catabolizing the alcohols, they would build up in the body and become toxic.

In any case, the health impacts of alcohol consumption are another example of how common understanding and resulting policy is often detached from the more rigorous academic research. It also highlights repeated failure of policy makers to consider the unintended consequences of well meaning policy.