Population and housing all muddled up (and now corrected)

RBA governor Glenn Stevens needed to say something about house prices in his recent speech. What he said was a little muddled, but if it is meaningful, does not bode well for home prices.  The analysis however got quite a bit of support from one property commentator.

First to the governor’s housing commentary –

It surely is no coincidence that the two state capitals that have had the clearest evidence of declining house prices over the past couple of years – Brisbane and Perth – are the two that previously had the highest rate of population growth and that have since had the biggest decline in population growth. Moreover, it is hard to avoid the conclusion that changes in relative housing costs between states, while certainly not the only factor at work, have played an important role. Relative costs are affected by interstate population flows, but those costs then in turn have a feed-back effect on population flows. This is particularly so for Queensland.

Meanwhile, at least up to 2007, people were confident and finance was readily available. Brisbane housing prices, which had been a bit over half of the average level of Sydney and Melbourne prices in 2002, had risen to be almost the same by 2008, which was unusually high.

The rate of interstate migration to Queensland then slowed further, to be at its lowest in at least a decade. The effects of that on state population growth were compounded by a decline in international migration, something seen in all states. At the same time, finance became more difficult to obtain and lenders and borrowers alike became more risk averse. This happened everywhere, but its effects in Queensland seem to have been more pronounced. Since then, Brisbane housing prices have been declining relative to those in the southern capitals and the construction sector here has found it tough going.

I decided to check the facts. Below is a graph derived from the ABS Sept 2010 demographic statistics on State populations. The figures show that WA did in fact have a population growth spurt during 2008, but that WA and QLD still retain their claim to the highest population growth rates in the country. In fact, Vic also recorded declines in growth rates of a similar magnitude to QLD in 2009-2010, but home prices have been far better maintained there.

The only conclusion, to draw, if we believe the RBAs population explanation of home prices, is that with national population growth rates now down the gurgler, home prices nationwide can expect significant falls. 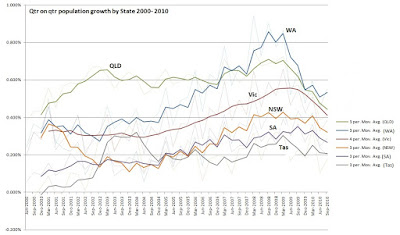