A common housing market myth is that low vacancy rates lead to rent increases, which lead to price increases (or at the very least, put a limit on any loss in home values). For example -

...this market imbalance will at some points cause an acceleration in rentals growth and a tightening in rental vacancies, so setting the stage for a recovery in prices through 2012.

Unfortunately, if history is anything to go by, this argument fails in real world conditions.

The two graphs below make the point clearly. In the early 1990s, vacancy rates soared and prices remained flat. But in the early 2000s, rental vacancies matched these highs during the strongest period of price growth observed in 25 years. How can these two opposing relationships been reconciled? 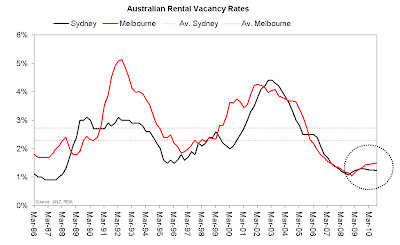 (Images from here and here)

I have a hypothesis.  During boom times overbuilding results in a slight glut in homes entering the rental market (eg 2000-2005). As the construction boom subsides, these homes are slowly absorbed by rental demand. When the market begins to fall (bringing much of the economy with it) potential sellers become reluctant landlords, boosting rental supply (eg 1990-1995). Additionally, nervous householders reign in spending on housing, resulting in an increased occupancy rate and lower rental demand.

There are many ways the occupancy rate increases, which don’t necessarily imply a shortage of homes. Downsizing leads to more efficient use of existing homes -

For example, the parents of a family whose adult children have moved out with friends or partners might find that the upkeep of a large house conflicts with their ‘grey nomad’ retirement plans. They can sell their 5-bedroom house and move into a new 2-bedroom unit, pocketing the price difference for their retirement.

In this scenario the construction of a 2-bedroom apartment resulted in a 5-bedroom home being available to meet the housing needs of population growth.

Other ways include university students moving home with their parents, and grandparents moving in with their children’s families.

If my hypothesis holds, then the ‘rental market cycle’ has two periods for each economic cycle, and tight markets are a signal of a price boom only if the previous trough was prior to a price fall. Therefore our next 'rental market cycle' will be one accompanied by falling prices, or flat at best.  The evidence in Brisbane seems to suggest that this pattern is beginning to occur (although prices have already fallen 10%).

(I also have a suspicion that auction results show a similar cycle - increasing in booms and busts, with low clearance rates at turning points.)
Email ThisBlogThis!Share to TwitterShare to FacebookShare to Pinterest