The public debate about mandatory helmet wearing laws in Australia has raged since Sue Abbott won an appeal to the District Court last August defending her failure to wear a helmet. Since then media coverage on the matter has been generally poor, often confusing the effectiveness of helmets in reducing head injuries following a fall, with the net social benefits of the law itself.

The debate is about mandatory helmet laws (MHL). The pro-choice side advocate repealing the law so that helmet wearing is voluntary (not compulsory non-helmet wearing as some mistakenly believe).

The argument is about whether the law itself provides net social benefits – not about whether an individual rider involved in a fall is more or less likely to injure their head by wearing a helmet. Evidence points to the fact that yes, a falling rider with a helmet will, on average, suffer less severe head injuries than a bare headed rider.

But is this a justification for a law?

Not at all. You see wearing a helmet while walking and driving will also prevents head injuries in the case of an accident. But one side of the debate seems happy to leave these other activities alone, even though it fits logically with their argument.

Indeed, supporters of MHLs often cite tax payer funded public health care as a justification. Yet this makes no sense whatsoever for the MHL debate, the tobacco taxes, or any other preventative health care issue.

As I have said before

…that increasing preventative health care, while having the benefits of a healthier and long life, often come at increased total lifetime health costs, rather than decreased costs as is often proposed. Remember, we all die some day, and any potential cause of death postponed will allow another to take its place, which of course has its own health costs.

Alternatively, a more healthy existence may make us more productive for longer and lead to us contributing more in taxes over our lifetime than the potential increase in health costs which were paid through the tax system for our preventative care.

Governments, and subsequently economists, worry about these things because many health care costs are borne by others though tax revenue, yet the net economic effect is anything but straightforward.

The only argument remaining in favour of MHLs is that we are saving people from themselves. It is a pretty weak argument for making law in my view.

The pro-choice advocates usually cite a variety of factors to demonstrate that any benefits an individual may receive by wearing a helmet can be significantly offset by their own risk compensation, and the changes to behavior of other road users.

1. Drivers will pass helmeted cyclists closer than bare headed cyclists (with cyclists with long blonde hair getting the most room).

5. Helmets can be a hazard in many circumstances (with many child deaths recorded as a result of helmet wearing)

6. Any deterrent to cycling is likely to increase time spent on sedentary activities, further contributing to the obesity epidemic.

7. The law allows governments to appear to be acting in the interests of cyclist safety, while neglecting other measures to improve cyclist safety, such as bike lanes or driver education.

Added together, it is argued that mandatory helmet laws are anything but a clear winner on the social benefit measure.

As I suggested at the opening, most media commentary has missed the point of the debate. The pro-choice side does not argue that helmets are worthless for any individual rider. They simply claim that helmets are not as effective at reducing injuries as they are made out to be, and that there are many flow-on social effects that further reduce cyclist safety that are not considered.

Even the academics have a hard time finding strong evidence that helmet laws have reduced head injuries significantly. The Voukelatos and Rissel paper I referenced in a previous post, showed evidence that the benefits of helmet laws in reducing the ratio of head to arm injuries for hospitalized cyclists was insignificant compared to other road safety improvements in the late 1980’s and early 1990s. It was later retracted after criticism over data inaccuracies (corrected data in the graph below), with the critics now publishing their own study using similar statistics to examine the effect of the law in NSW. They find that there is a statistical significant impact of the law in reducing the ratio of head to arm and leg injuries.

Unfortunately their model also found that the helmet law led to fewer hospitalisations of pedestrians with arm injuries.

For cyclists who do fall in a manner leading to significant injuries, a helmet may reduce head injuries. That it is so difficult to see the effect of helmet laws in the data suggests that any benefits of helmet wearing must be very small, even at an individual level. Unfortunately the MHL supporters usually feel that helmets prevent almost all head injuries, which is clearly not the case. They AT BEST provide a marginal improvement in head safety. 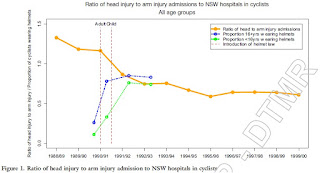 In all, I hope the readers who now stumble across ‘helmet headlines’ can bring a bit of perspective to the issue.
Email ThisBlogThis!Share to TwitterShare to FacebookShare to Pinterest