Concern over the AUD

The Aussie dollar has maintained its above USD parity levels for some time now.  Given Australia's reliance on imported consumer goods, this has raised many concerns.

Now it appears that the actions of foreign central banks might be another factor to consider. The Russian central bank recently bought $4.7billion of AUD.  It seems that our relatively good economic performance is  attracting a fair bit of attention.

There are suggestions that the RBA might want to intervene to take the pressure off the AUD, and indeed their current dealing reflect concern over the high value of the dollar.  Maybe this a partly a factor in their fx dealings, but it doesn't appear to be (see chart below for RBA fx dealings). 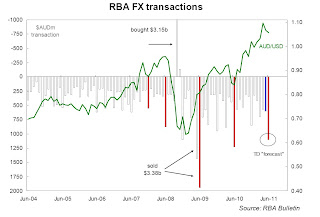 The question comes down to whether we choose to buffer our domestic firms from foreign economic upheaval, or are we ‘all in’ in this global economy game?

I think a reasonable middle ground is to support a mining resource tax and a sovereign wealth fund to balance our economy.  I recently suggested that Quarry Australia was not a desirable place to be, and some type of counterbalancing policy would be inherently stabilising.

Whether this would have much of an impact on the AUD I don’t know. But another part of me thinks – stuff it. Go all in. AUD to $1.25+. The non-mining sectors of the economy will get the shake up they really need to improve efficiency and competitiveness in the long term.   You see I wasn't thinking long term.  Maybe short term pain would give productivity the jolt it so desperately needs.

But of course, there are real people's lives to consider as well, and shake-ups like that are painful.

Given the high probability that any government intervention will be an ineffective mess anyway, maybe we should just let the market function for a while.

There are plenty of questions, but unfortunately no easy answers.   Expect much more debate on this situation in the coming months.
Email ThisBlogThis!Share to TwitterShare to FacebookShare to Pinterest